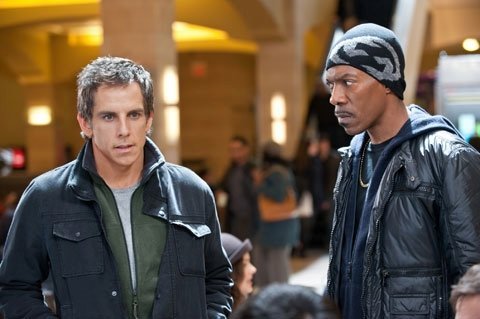 What could have been a crowd-pleasing caper is marred by a steady stream of crude language. Though it features some amusing moments courtesy of a talented ensemble, the topical romp is also short-circuited by manic energy that comes across as more slapdash than extemporaneously madcap.

After Shaw is arrested by the FBI for securities fraud, Tower employees learn he looted their pension fund. Building manager Josh Kovacs (Ben Stiller), whose job it is to cater to the wealthy residents, feels responsible since he asked Shaw to invest the staff’s money. Shaw’s patronizing attitude toward him exacerbates Josh’s thirst for payback.

Relying on stereotypical ethnic humor, and using expletives to express most every emotion, screenwriters Ted Griffin and Jeff Nathanson don’t score high marks for imagination. Their main attempt at being clever involves a famous chess move, which they incorporate in a manner that serves to telegraph the plot.

For his part, director Brett Ratner — known as much for throwing lavish Hollywood parties as for helming raucous comedies — stages scenes with little regard for logical continuity and an engaging flow. Loud and fast are his default settings.

The humor in "Tower Heist" is broad, so much so that parents thinking it might be acceptable for older children and teens should be forewarned. Inappropriate expressions, combined with some fairly explicit sexual talk, render the movie morally dubious, regardless of the fact it’s being offered in the spirit of "harmless fun."

By underestimating their premise as well as their audience, the filmmakers prove there are better ways to give power to the people and seek justice at the multiplex.

The film contains some profanity, frequent crude and crass language, much sexual banter and innuendo, a suicide attempt and a scene glamorizing alcohol abuse. The Catholic News Service classification is L — limited adult audience, films whose problematic content many adults would find troubling. The Motion Picture Association of America rating is PG-13 — parents strongly cautioned. Some material may be inappropriate for children under 13.