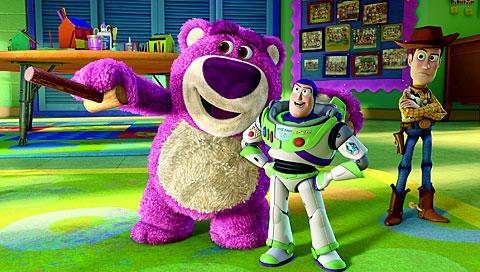 NEW YORK (CNS) — The third time’s a charm with "Toy Story 3" (Disney/Pixar), the action-packed sequel to two of the biggest animated films of all time, "Toy Story" and "Toy Story 2." Arriving 15 years after the start of the franchise, "Toy Story 3" offers a satisfying and poignant conclusion with valuable lessons on family, friendship, and destiny.

Toy owner Andy (voice of John Morris) is all grown up and heading to college, which means putting away his childish things. This is the moment all toys dread, with only three possible outcomes: storage in the attic, donation to charity, or the garbage pile. "At the first sight of the trash bags, we leave," says the leader of the green toy soldiers, as his battalion parachutes out of the open bedroom window.

Woody (voice of Tom Hanks), Buzz Lightyear (voice of Tim Allen), and the rest of the "Roundup Gang" wax philosophical as the "warm and safe" attic beckons. "Every toy goes through this," Woody says. "We’ve survived yard sales and spring cleaning." Although the toys have never been played with in years, Woody insists that is not their raison d’etre: "It’s never been just about being played with. It’s about being there for Andy."

Before "Toy Story 3" gets too bogged down in discussing the meaning of plastic life and the destiny of playthings, the action adventure kicks into high gear. Woody is chosen to go to college with Andy, while the other toys, prepped for the attic, are accidentally placed in the trash.

They escape, and joined by a reluctant Woody, spurn Andy and choose the next best option: donation to "Sunnyside," a daycare center which promises the one thing toys desire — to be played with by a loving child.

At first glance, Sunnyside seems like Nirvana, and a warm welcome is offered by the resident toys and their benevolent leader, Lots-O’Huggin Bear (Ned Beatty). "Here there are no ‘overs,’ no heartache," Lots-O tells the refugees. "We are never abandoned or forgotten. We control our destiny."

Woody is not convinced, and his loyalty to Andy leads him to part company with his friends. But his journey home is cut short, and Woody lands in the arms of a caring child, Bonnie (Emily Hahn). Her home offers even more new toys to play with, including a hilarious porcupine dressed in lederhosen, Mr. Pricklepants (Timothy Dalton), who fancies himself a classically trained actor slumming among amateurs.

Meanwhile, back at Sunnyside, the rest of the gang savors their peaceable kingdom — until the children arrive. The toddlers are unruly and destructive, and this dream world becomes a nightmare.

Lots-O, moreover, rules with an iron paw, imposing prison-like conditions after hours on the new arrivals. Sunnyside becomes a very dark place, and scenes of toy "torture" (and a rather menacing Big Baby doll) may upset or confuse the smaller ones in the audience.

Taking a page from "The Great Escape," "Toy Story 3" ramps up the action when Woody learns the truth and returns to help his friends. "We’re a family. We stay together," he insists.

The journey is perilous, but "Toy Story 3" never forgets its core audience. Good triumphs over evil, and the denouement is heartfelt, hope-filled — and handkerchief-worthy.

Directed by Lee Unkrich ("Toy Story 2," "Finding Nemo") with music, once again, by Randy Newman, "Toy Story 3" is a film for all ages. Baby-boomer parents will appreciate the gag-driven script with plenty of innuendo (the blossoming relationship between the Barbie and Ken dolls steals the show), while kids will delight in all the new characters — and drag their parents to the toy store afterward.