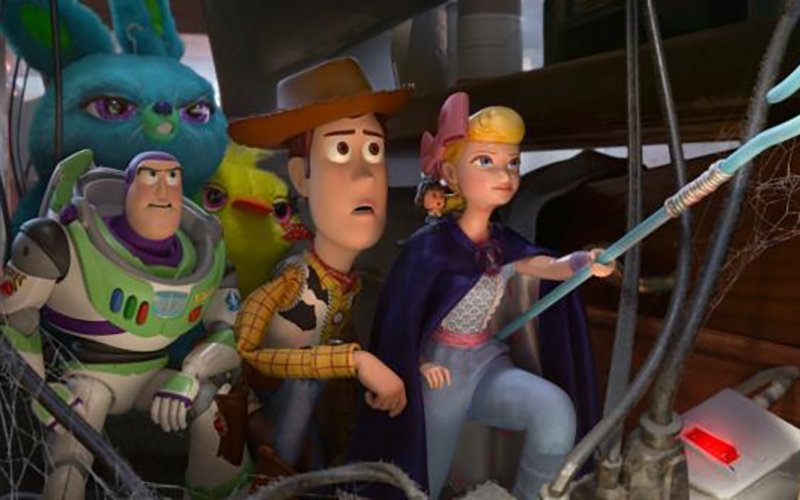 NEW YORK (CNS) — Just how good are the hotshots behind “Toy Story 4” (Disney)? So good that, by the time the closing credits roll, moviegoers will likely feel more emotional connection to an animated spork than they have to the vast majority of live-action human characters they’ve ever seen on screen.

Deftly juggling humor, sentiment and even clever gothic material, director Josh Cooley and screenwriters Andrew Stanton and Stephany Folsom deliver a delightful addition to the animated franchise that has filled out sporadically since 1995. That mild horror element, together with some dangerous situations, however, might prove too scary for the littlest family members.

Just as he continues to lead the familiar gang of toys who come to life when humans aren’t looking — including Buzz Lightyear (voice of Tim Allen), the astronaut with whom he once carried on a rivalry — cowboy Woody (voice of Tom Hanks) also continues to serve as a model of selfless devotion toward their kid owner, Bonnie (voice of Madeleine McGraw).

So, when Bonnie forms an eccentric attachment to the home-made doll she has created out of the utensil referenced above, Woody not only resists resenting his displacement in her affections, he becomes a mentor to the newcomer, whom Bonnie has dubbed Forky (voice of Tony Hale). Forky will need all the guidance he can get since he’s convinced he’s trash rather than a plaything and fails to understand his obligations toward Bonnie.

When Woody and his companions, including Forky, are brought along on on a family vacation, he finds traces of his long-lost buddy, Bo Peep (voice of Annie Potts). As opening flashbacks have explained, Bonnie lost interest in the shepherdess figurine, Bo Peep was given away, and the friends have been separated for nearly a decade. Their reunion opens the way for them to discover deeper feelings for each other.

Scenes set in an antique store introduce both an ensemble of unsettling ventriloquist dummies and a memorable addition to the toy community, 1970s Canadian stuntman Duke Caboom (voice of Keanu Reeves). Having long ago been rejected by his first kid because he failed to perform the tricks portrayed on his TV commercial, Duke is beset by a sense of inferiority which he masks with bravado.

Amid the complex emotional situations in which the characters find themselves, the script pits loyalty against love and friendship against romance — with poignant results. It also explores the guidance offered by that “little voice inside,” the conscience. The latter theme is treated both seriously and as a source of laughs, with Buzz pushing the buttons in his chest and relying on the random messages they generate for counsel.

A funny and touching treat for viewers of almost all age groups, “Toy Story 4” is as wholesome as it is wise.