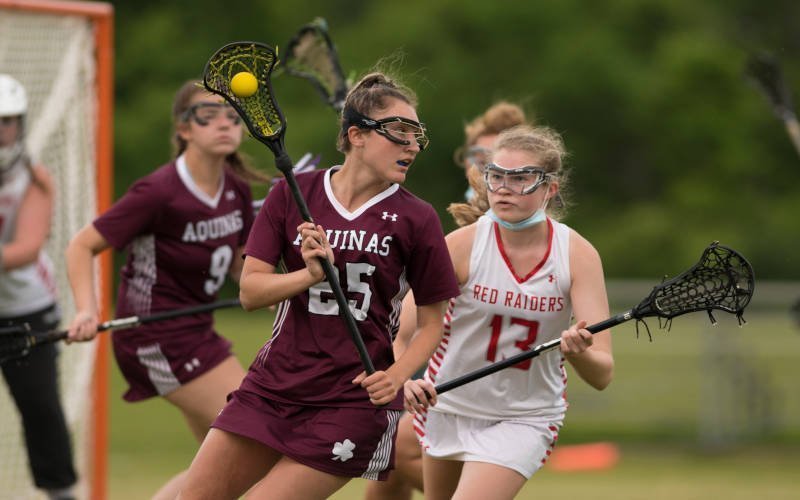 Led by a team title for the McQuaid Jesuit boys and several individual first places, Catholic high schools in the diocese thrived at recently held sectional track and field championships.

The sectional competition marked the end of the spring sports season; no state championships were held due to health concerns regarding the coronavirus pandemic.

Event winners for the Knights were Jayson Chichelli in the 1,600-meter run, Sam Perozzi in the 400 hurdles and Joe Cairns in the pentathlon. McQuaid also racked up considerable points in team scoring by recording seven second-place finishes and four third places. The Knights finished with a point total of 138 to outdistance second-place Rush-Henrietta’s 116 showing.

Along with McQuaid’s success, several event winners from other high schools were crowned. First-place finishers were: Our Lady of Mercy’s Shannon Trevor in the 1,500- and 3,000-meter runs, along with Lucia Lanahan in the pentathlon and the Monarchs’ 3,200 relay at the Section 5 Class A1 meet June 10; Elmira Notre Dame’s Piper Young in the 800, Alexandra Cowley in the 3,000 and Makenna Keough in the 100 hurdles at the Section 4 Class C1 championships June 8; Bishop Kearney’s Jahlique Johnson in both the 100- and 200-meter dashes at the Section 5 Class B3 boys’ competition June 12; and Aquinas Institute’s Maya Parks in the triple jump as well as the Little Irish’s 400 relay at the Section 5 Class B1 championships June 12.

• Notre Dame softball advanced to the final of the Section 4 Class C playoffs. The Crusaders, seeded No. 3, scored a 9-2 win over No. 6 Union Springs in quarterfinal play June 7. That was followed by a 9-5 semifinal triumph over No. 7 Tioga June 9. ND was halted by top-seeded Deposit-Hancock, 5-2, in the June 11 title game.

• Notre Dame boys’ lacrosse fell just short of a Section 4 Class D title. The Crusaders, seeded No. 3, earned an 11-7 win over No. 2 Chenango Forks in semifinal play June 10. Notre Dame’s season ended with a 10-9 loss to No. 1 Chenango Valley in the championship contest June 14.

• Aquinas Institute girls’ lacrosse reached the title game of the Section 5 Class D tournament. The fourth-seeded Little Irish started out with a 14-4 quarterfinal victory over No. 5 Mynderse/Romulus June 7, then rolled past top-seeded Penn Yan, 14-8, in the semifinal held June 9. AQ then fell to No. 2 Palmyra-Macedon, 12-8, in the title game June 11.

• In boys’ golf, McQuaid advanced to the Section 5 final in team competition. The Knights won 204-205 over Pittsford Mendon in quarterfinal play June 1, then scored a 390-411 win over Hilton in the semifinal round June 8 before being stopped by Victor, 390-403, in the championship match June 11. In addition to team sectionals, the Knights’ Philip Minnehan placed fourth overall in the Section 5 Class AA individual championships May 22.

• McQuaid’s Dan Dancuta and Dave Dancuta reached the final of the Section 5 Class A boys’ tennis doubles competition. The Dancutas won their May 29 semifinal match, 5-7, 6-3, 7-6 over Pittsford Mendon’s Kevin Mortimer and Imad Shaheed before falling later that day in the title match by a 6-2, 6-2 count to Brighton’s Rahul Ravi and Kirill Kobyakov.