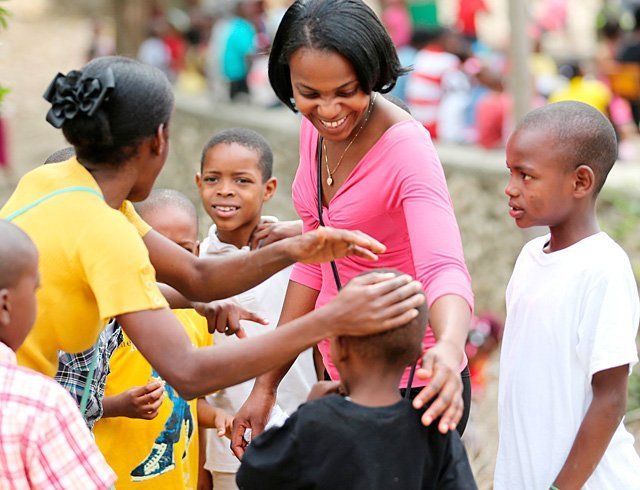 HINCHE, Haiti (CNS) — Teacher Nadia Jean Baptiste has turned to rocks to teach math, and the third graders in her classroom at St. Martin de Porres School like that she did.

By using rocks from the school’s courtyard to illustrate counting and basic addition and subtraction principles, Baptiste said her students more easily grasped math concepts than in the past.

"They can see the rocks," she said.

It sounds simple. But before Baptiste underwent training under the Haiti initiative of the University of Notre Dame’s Alliance for Catholic Education, she illustrated math on a blackboard. Books in Haitian schools are difficult to come by.

"I’ve seen improvement in the quality of my teaching," Batiste said of her two summers in the program.

Sister Augusta Ernest, St. Martin de Porres’ primary level principal, said she likes what she has seen from Baptiste, 39, and Junie Edouard, 30, a first-grade teacher at the school who has been involved in the training program.

"We have seen that the two teachers who went through the training are doing just as good of a job as the teachers who went to formal school to learn how to be a teacher," said Sister Augusta, 33, a member of the Sisters of St. Joseph of Cluny.

Two years ago, Baptiste was a teacher’s aide with limited teaching experience, but Sister Augusta said she is "taking charge" in her classroom.

Jean-Richard Joseph, director of education for the Hinche Diocese, said the benefits of the training are seen in the improved scores of students taking the sixth-grade competency exam mandated by the Haitian government.

The Haiti initiative, which receives staff support from Catholic Relief Services, has improved the teaching skills of dozens of teachers — many of whom are without post-secondary school-level formation — in the dioceses of Fort Liberte, Les Cayes and Hinche. In Hinche, 30 teachers from 10 schools have received training under the program during the last two summers and over holiday breaks, Joseph said.

The initiative also has other components. One component is designed to help administrators improve school governance, and another is aimed at parents to widen their involvement in school activities.

Parent Loester Louis has a kindergartner and a fourth grader enrolled in St. Martin de Porres. She regularly meets as part of a parent committee with Sister Augusta and other administrators to discuss issues as diverse as educational offerings, safety issues and fundraising.

She and Sister Augusta said the conversations have led to better opportunities for students, boosting their chances to complete high school and perhaps enter college.

The school’s parent committee also wants to meet with city officials to talk about paving the street that separates the school’s primary and secondary campuses because its rocky base is a dangerous to navigate on foot.

Beyond that, the initiative has launched a project to help students improve reading skills.

Haiti Reads began last summer for students in first through third grades in 52 schools in the dioceses of Cap-Haitien and Gonaives with a $1 million grant from an anonymous donor. Additional funding and staff support is coming from the Alliance for Catholic Education and Catholic Relief Services.

The difficulty in teaching children how to read is rooted in the country’s poorly educated teacher corps and the lack of an effective literacy curriculum in Creole, the language spoken by most Haitians.

T.J. D’Agostino, associate director of the Alliance for Catholic Education, said the January 2010 earthquake in Haiti caused the alliance to re-evaluate its programs.

Although the alliance was working in Haiti prior to the earthquake, the tragedy exposed the difficulties facing Catholic schools, D’Agostino explained. With the encouragement of the Haitian bishops’ Commission for Catholic Education, the alliance and CRS surveyed 2,315 schools in all 10 dioceses and archdioceses to identify their greatest needs, he said.

The findings led to the development of programs for teacher education, school governance and management, finances and parental involvement. The reading program followed once funding was secured.

While still early, the overall effort will benefit the entire country, Joseph said.

"Education is the base of a society," he explained. "When that’s done better, then there can be more advancement as a whole."

The next round of training for the teachers begins in July. Baptiste said she planned to be there.

"I really like it a lot," she said. "I’m excited to be part of it. You can’t not love something that helps you be better at what you do."