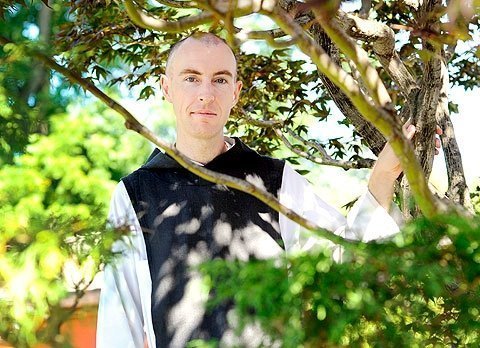 Father Isaac Slater was ordained a priest by then-Bishop of Rochester Matthew H. Clark during an Aug. 11 Mass at Abbey of the Genesee in Piffard, Livingston County. Above, Father Slater stands in the abbey’s courtyard, which he has worked to revitalize in recent years.

He began monastic life at the dawn of the new millennium, and nearly 13 years later is embracing another vocational milestone: the priesthood.

Father Isaac Slater, OCSO, was ordained a Trappist priest Aug. 11 by then-Bishop of Rochester Matthew H. Clark during a 9:15 a.m. Mass at Abbey of the Genesee in Piffard, Livingston County.

"I didn’t anticipate becoming a priest when I became a monk," Father Slater told the Catholic Courier. "In time an attraction to the priesthood developed gently and unobtrusively from my life as a monk. I became a monk in order to bring God’s mercy into the world, and I see monastic priesthood as another mode of this same vocation."

Father Slater, 38, grew up in Markham, Ontario, near Toronto. An avid reader and poet from an early age, he publishes under the name John Slater. His latest poetry collection, Surpassing Pleasure, was released earlier this year and is available by visiting http://porcupinesquill.ca.

He attended Trent University in Peterborough, Ontario, studying literature and philosophy. During that time he embarked on a self-described conversion experience.

"Intellectually, my studies at university, especially classical philosophy and modern poetry, were broadening my world and helping me to appreciate Christianity in a more mature way. Morally, I was caught up in all kinds of craziness," he remarked. "The major breakthroughs at this time involved a lot of what monastic tradition calls ‘penthos,’ compunction: the awareness of just how wretched and self-deceived one has become while at the same moment seeing that I was loved nonetheless, unconditionally and as he is, by a living God who is faithful and true."

His conversion process helped to reunite Father Slater with the childhood faith from which he’d drifted and deepen his attraction to becoming a monk. He ceased college studies after three years and then worked as a furniture mover until entering Abbey of the Genesee as a postulant on Dec. 31, 1999.

Father Slater said the decision to enter by the new millennium was a combination of establishing a target date and the influence of Blessed John Paul II’s writings on the third millennium. He added that he was attracted to the Trappist order by the simplicity of monastic life and an environment that helped further his creative gifts.

He lived outside his cloister for four years while studying at Catholic University of America, and became a priest Aug. 11 with many family, friends and fellow Trappists looking on.

Among the unique highlights from the ordination Mass were a post-Communion hymn sung by Father Slater’s sister; the presence of visiting Nigerian monks; and African drum music and dancing. Father Slater added that he was grateful for Bishop Clark’s participation.

"He was very gracious and his homily was much appreciated. A number of my family and friends who were present were non-Catholic and Bishop Clark’s remarks on ‘signs of life’ — both sacramental signs but also everyday exchanges and encounters with beauty and goodness — struck a chord," Father Slater said.

Father Slater said celebrating his first Mass on Aug. 12, the day after his ordination, was a major highlight as well: "I felt like I was in a dream, a kind of serene exhilaration."

He is one of 27 Cistercians of the Strict Observance residing at Abbey of the Genesee, 11 of who are priests. He said his transition from Brother Slater to Father Slater won’t have a drastic effect on his daily responsibilities.

"Brothers and priests live basically the same life in a Cistercian monastery, with the difference that priests hear confession and preside at the Eucharist," he explained. In addition to religious commitments, his responsibilities at the abbey over the years have included assisting in the plumbing department and infirmary, helping bake the renowned Monks’ Bread and tending the abbey’s Japanese garden.

Despite the joy of being ordained a priest, Father Slater stressed that his conversion is far from complete.

"I don’t think of priesthood as something I’ve attained. Rather, it’s a way that the life of the risen Christ within has taken hold of and attained me more completely," he remarked. "Conversion seems to be made up of both breakthrough moments and their slow assimilation leading to more breakthroughs and on it goes. Monks vow lifelong conversion through fidelity to the monastic life."