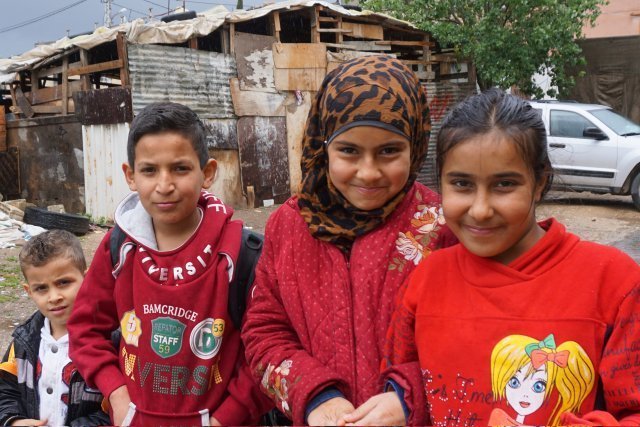 Syrian refugee children stand outside their school in Zahle, Lebanon, in the country’s Bekaa Valley April 12. The international Catholic charity Caritas has been instrumental in helping Syrian refugees attend Lebanese public schools to continue their education.

ZAHLE, Lebanon (CNS) — On a rainy spring day, the misery of hundreds of thousands of Syrian refugees is compounded as they shelter in dilapidated shanties dotting a long muddy swathe of the verdant Bekaa Valley.

Colorful plastic sheeting, advertising cameras and cosmetics, bundle the creaky structures like unusual parcels stacked in jaunty rows, but the sheeting does little to keep out the damp and cold.

Approximately 150,000 such informal camps for Syrian refugees exist in the valley because the Lebanese authorities do not allow the United Nations to set up camps in the country. The refugees must pay Lebanese landowners $35-$100 a month to park tents and shanties on land used mainly for agriculture.

Such victims fleeing Syria’s 5-year conflict were among those visited by Pope Francis on the Greek island of Lesbos, as their hopes of starting a new life in Europe fade. Hundreds have died in the past year making the perilous journey into Turkey and onward to Greece in flimsy skiffs.

But the 1.06 million Syrians who remain in neighboring Lebanon face continuing struggles with war trauma, dwindling funds, and a very uncertain and often dangerous future.

"They have internalized the violence and loss in the conflict in Syria. Perhaps they saw loved ones killed, their houses destroyed in front of their eyes, or even being uprooted from their country has caused trauma," Monette Kraitem, a Lebanese psychologist working the Catholic charitable agency Caritas, told Catholic News Service.

She and fellow Caritas psychologist Christelle Ltief have so far helped 1,500 Syrian refugee children and women sheltering in this part of the Bekaa Valley to process the pain at the Caritas Lebanon Migrant Center in the nearby town of Taalabaya.

"We try to help the children deal with their trauma by expressing their feelings" through "play, art and music therapy, relaxation and respiration techniques, and individual and group therapy, where children can say how they feel without being judged," Ltief told CNS.

"They then feel free and released with a sense of well-being that finally begins to return to them," she said, as cans of colorful crayons and markers could be seen stashed on a nearby table.

Many Syrian refugee children in the Bekaa exhibit aggressive behavior toward siblings and other children at school, struggle with hyperactivity, anxiety and fear, as well as sleep and eating disorders, the psychologists said.

"Parents come to us complaining that their children are bed-wetting, hostile and suffer from concentration and learning difficulties at school," Ltief said.

She recounted the story of a young girl named Fadiya who witnessed her father’s death and torture in Syria.

"Fadiya had so many problems, including ways of communicating with her mother and sisters, insomnia and eating disorders," Lteif said. "But we found that after therapy and many individual sessions, she has been able gradually to overcome this trauma."

Caritas Lebanon is also the main education partner for UNICEF, the U.N. children’s agency, in the Bekaa Valley. While Caritas plays a pivotal role in helping about 7,000 Syrian refugee children get the education they need, it faces huge challenges.

For a start, the charity would like to see more than double that number attend Lebanese public schools in the valley. Doing so ensures that Syrian children will not lose out on education and will receive a recognized certificate for their studies, unlike teaching performed informally in the camps.

"Education is needed in order not to have a lost generation from the war in Syria, but the refugees do not make our work easy," Laurent Kallas, communications officer with the Caritas education department, told CNS.

In some of the informal camps, extremist ideology is also being taught, Kallas said.

"We immediately report this to the Lebanese Ministry of Education to take urgent action," he said.

Syrian refugees settling in the Bekaa Valley often come from rural areas and do not see the need for educating their children beyond a certain point, said Rebecca Chamoun, an educational coordinator for Caritas.

Caritas runs educational awareness programs to try to convince families that education can lead to a better life, income and brighter opportunities. The charity provides needed school materials such as stationery, school bags and, sometimes, transportation.

Some families resist sending their daughters to school believing girls are "only for marriage and homemaking at the age of 13 or 14," Chamoun told CNS. Others fear their unchaperoned daughters will be exposed to unwanted advances at school.

Parents may pull their boys out of school, she said, because they are expected to work alongside their parents in planting or harvesting of crops to earn money for the family.

And, in sharp contrast to conservative Middle Eastern cultural mores, some Syrian refugee fathers send their daughters out to work as prostitutes to get "easy money."

Kallas said that families justify the action by saying that the income is better than what is earned from working in agriculture, when the refugees often are paid in harvested food rather than cash.

"When you tell the girl, please, go to school, build your future. She says: ‘It will be years until I have an income. I will go work on the streets instead,’" Chamoun said, expressing the frustration of educators.

"Of course, this action takes its own psychological and physical toll on the child as she is exposed to violence, abuse and sometimes rape," Kallas said. Some fall prey to human traffickers.

In other cases, families force their daughters into early marriage for the wedding dowry.

"I saw a beautiful young girl in the camp holding a little baby," Kallas said. "I thought it was her sister. But I was told that the girl just got married — for the second time — to a 60-year-old man."

"Maybe the girl married at 10, was divorced at 12, and then remarried at 13 when she was able to have sexual relations," said Kallas, shaking his head in disbelief.

He added that some refugees are so desperate that they sell their organs, especially kidneys, to gain badly needed cash to pay for rent and food.

"Many Syrian children didn’t know their rights to attend Lebanese public schools. We helped them to know their rights," Zahraa Ayoub, Caritas social work field coordinator, told CNS. The coordinator said one social worker told a family who initially refused to send the daughter: "Education is like a ‘weapon’ for her to enter society in a strong way and face all problems."