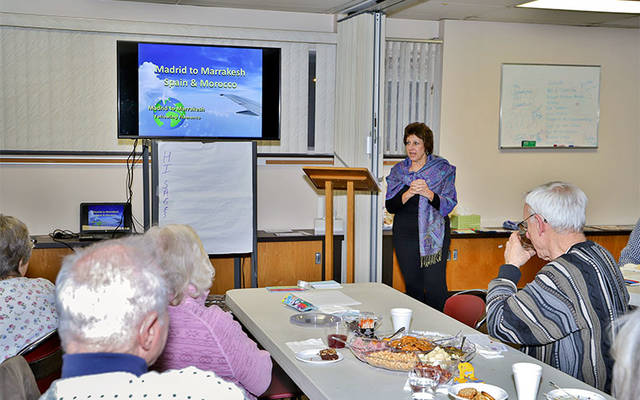 Move over, TED talks. There’s a new talk in town.

Well, in the towns of Ontario and Sodus, that is.

Last year a team of St. Maximilian Kolbe parishioners put together a series of events called Travel and Books Talks, or TAB Talks for short. These talks, which debuted in March, each featured a brief travel-related presentation from one or two parishioners, followed by an equally brief question-and-answer session. Snacks, usually related to the theme of that day’s presentation, were available throughout each session.

“The format (of the presentations) is patterned after TED talks,” explained Jean Bell, one of the organizers of the TAB Talks.

The TED talks Bell referred to are relatively brief presentations of 18 minutes or less that were presented at the main Technology, Entertainment and Design conference or one of its satellite events. These talks have been around since the inaugural conference in 1984 but gained popularity after conference organizers began posting videos of the presentations online in 2006.

The TAB Talks were born out of brainstorming sessions between Bell, Irwin and fellow parishioner Ann Sass. St. Maximilian Kolbe was formed in 2009 by the merging of St. Mary of the Lake Parish in Ontario with Church of the Epiphany in Sodus and its mission church, St. Rose of Lima in Sodus Point. The parish celebrated a jubilee year in 2016, which coincided with the 50th anniversary of the church building in Ontario but offered many opportunities for parishioners from the three worship sites to come together and form friendships, Bell told the Catholic Courier. Bell, Sass and Irwin wanted to build on that momentum, she said.

“We knew we needed to continue,” Bell said. “I learned from the jubilee that it’s important to do a series of events or have a very long horizon for people to get used to a new idea. You can knock yourself out on one event, and it may not have legs the first day.”

Bell, Sass and Irwin decided the events would take place the second Saturday of each month immediately following the 4:30 p.m. Mass at St. Mary of the Lake.

Bell had been learning about TED Talks and said the idea of brief TED-type talks was appealing and seemed like a good fit for the time slot.

Sass suggested travel as a potential topic for the series to focus on because she knew of quite a few St. Maximilian Kolbe parishioners who’d gone on trips to various destinations throughout the United States as well as foreign countries. An avid traveler herself, Irwin proposed that the series might provide a way for parishioners to share practical tips and talk about different types of travel. The talks are meant to be of interest to both travelers as well as those who don’t often get away, Irwin said, noting that some parishioners initially believed the series was just for people preparing for trips.

“Not at all,” she said. “We’re just getting together and sharing some stories and having fun. Travel is something that a lot of people don’t do but are curious about, and it’s also something that would give parishioners an opportunity to get to know other parishioners.”

Parishes frequently plan events to build community among parishioners, but Sass said she’s never seen anything quite like the TAB Talks.

“You can have your potlucks and things, but this is different. We thought we would reach a different group,” she said. “It’s like with anything else. People are so busy. You’re just trying to find the magic.”

“It was quite surprising the variety of things that the parishioners were involved in. You see people come into church every Sunday and you never really understand what they’ve been through or what their likes and dislikes are. It was just a good sharing experience,” Joe Bradbury said.

EDITOR’S NOTE: The TAB Talks are on hiatus for the summer but will resume in September with a new time slot and location. They will take place the second Sunday of each month following the 10:30 a.m. Mass at Church of the Epiphany, located at 105 Main St. in Sodus.