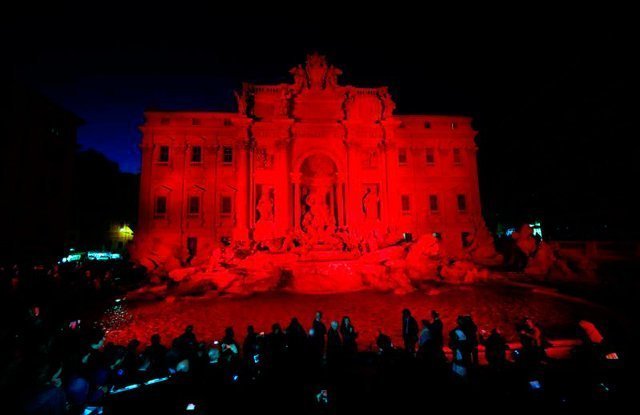 The Trevi Fountain in Rome is lit in red during an event to raise awareness of the plight of Christian martyrs April 29.
By Gaby Maniscalco
Catholic News Service
ROME (CNS) — The Trevi Fountain, a Rome landmark, was lit up in red April 29 in a graphic commemoration of the thousands of modern Christians martyred for their faith.
The event was sponsored by the Catholic charity Aid to the Church in Need, which wanted to "draw attention to the dramatic issue of anti-Christian persecution."
The evening event also featured four guest speakers who shared the personal stories of Christians killed for their faith. After the speeches, the fountain was lit to represent the blood of the Christian martyrs. Throughout the night, images of Christians persecuted for their faith were projected onto the fountain. The photos included the four Missionaries of Charity murdered in Aden, Yemen, in early March.
Pope Francis frequently mentions his belief that today, "perhaps more than in the early days" of Christianity, Christians are "persecuted, killed, chased out, robbed just because they are Christians."
In ecumenical gatherings, the pope has noted how the persecution unites Christians of all denominations. During an audience Feb. 29 with Patriarch Mathias of the Ethiopian Orthodox Tewahedo Church, the pope said: "Just as in the early church the shedding of the blood of martyrs became the seed of new Christians, so today the blood of the many martyrs of all the churches has become the seed of Christian unity."
Copyright © 2023 Catholic News Service, Inc. All rights reserved. Linking is encouraged, but republishing or redistributing, including by framing or similar means, without the publisher's prior written permission is prohibited.