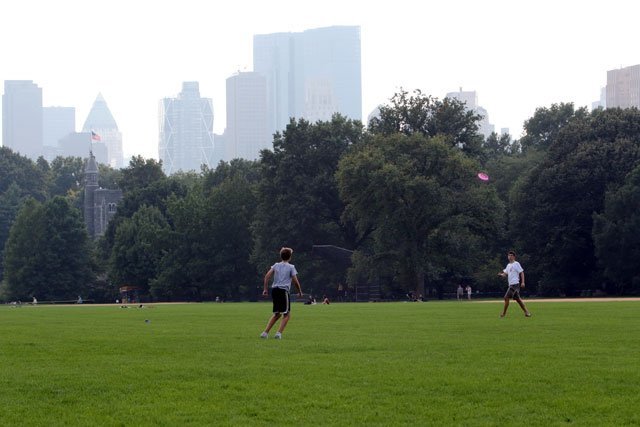 Youths play with a Frisbee in Central Park in New York City Sept. 1, the day city officials announced plans that Pope Francis' motorcade will travel through the park Sept. 25, allowing tens of thousands additional people to see the pontiff.
By Beth Griffin
Catholic News Service
NEW YORK (CNS) — Pope Francis will get a glimpse of leafy Central Park and thousands of waving New Yorkers Sept. 25 when he makes "a historic procession" through the urban landmark, according to the city’s mayor.
Mayor Bill de Blasio announced Sept 1 the pope will ride along the West Drive of the park on his way to celebrate Mass at Madison Square Garden, which is set for 6 p.m.
"We are grateful to the archdiocese for their cooperation in giving even more New Yorkers a chance to join in this historic visit," de Blasio said in a statement. "The procession through Central Park will give thousands of New Yorkers an opportunity to come face to face with Pope Francis."
Admission to the route will be limited to New York state residents and tickets will be distributed through an online giveaway contest. The mayor’s office said people interested in applying for a pair of tickets can visit the city’s website at nyc.gov/papalvisit or call 311 in New York from Sept. 3 to Sept. 7 to enter the contest. Winners will be notified Sept. 10.
The 843-acre park north of midtown Manhattan was designed by architects Frederick Law Olmstead and Calvert Vaux. It was completed in 1873 after 15 years of construction. Central Park was designated a National Historic Landmark in 1962.
Copyright © 2022 Catholic News Service, Inc. All rights reserved. Linking is encouraged, but republishing or redistributing, including by framing or similar means, without the publisher's prior written permission is prohibited.