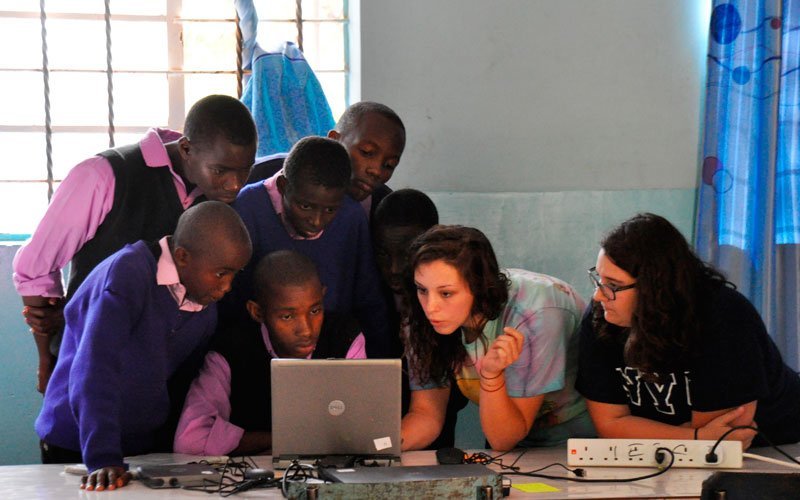 Erin O’Donnell has always been supportive of St. Benedict Parish’s Kalama Project, through which parishioners raise money for people in the impoverished Kenyan village of Kalama. Her attitude about the project has changed in the last few weeks, however.

She had always thought it was a worthy cause, but now it’s more than that — now it’s personal.

O’Donnell is one of 18 St. Benedict parishioners who traveled to Kenya in early June with Dawn Burdick, St. Benedict’s pastoral associate. The group brought 16 suitcases full of medical supplies for a new health clinic that soon will open in Kalama, as well as five laptop computers for students at a minor seminary in Machakos, Kenya. The trip had a profound effect on all of the travelers, Burdick said.

“Everyone ended up coming away a changed person. It is wonderful to see the change in each person, and see they really understand we are one family. There is no difference,” she said.

The Kalama Project began in June 2009, three years before St. Mary Parish in Canandaigua and St. Bridget/St. Joseph Parish in East Bloomfield officially joined to form the new St. Benedict Parish. The project’s impetus came when parishioners asked their sacramental minister at the time, Father Dominic Munini, to tell them a little bit about his hometown of Kalama. Father Munini described three of the challenges facing his village: a lack of fresh and clean water, a lack of nearby health-care facilities and an inability for most residents to afford anything beyond an eighth-grade education.

Parishioners were moved by Father Munini’s descriptions of these challenges and began raising money to remedy the problems. By early 2010 they’d raised more than $60,000, which was used to dig a bore-hole well in Kalama during the summer of 2010; the project was completed the next year. This meant villagers no longer had to walk 15 minutes before climbing down a cliff to reach the Athi River, where they could gather contaminated water to be used for washing and for watering sickly animals, but not for human consumption.

“I can’t imagine how long it would take to climb down, walk to the river and then attempt to climb back up carrying 20 liters of water, to say nothing of the crocodiles and hippos that are in the river,” Burdick said after seeing the river firsthand during her trip in June.

Water from the well now is pumped to holding tanks in the village, as well as to the local school, greenhouses and the new medical facility, which also was funded by contributions from St. Benedict parishioners. The clinic is scheduled to open in a few weeks, noted Burdick, who along with her fellow travelers brought bandages, syringes and medicine, as well as a microscope and a centrifuge. Through the Kalama Project, parishioners also sponsor several students, thus enabling them to attend high school and even college.

Burdick, her fellow travelers — mostly young adults in their late teens or early 20s — and their many bags full of medical supplies left Rochester the morning of June 1 and arrived in Nairobi, Kenya, late on June 2 after 30 hours of travel. The next day Father Munini drove them to Machakos, where he is rector at the Diocese of Machakos’ minor seminary. The travelers stayed there for the majority of their trip and showed the high-school students attending the seminary how to use their new laptops. They also played soccer and basketball games with the students, and many friendships developed in the process, O’Donnell said.

“That was really cool because it was something we all connected over. It was really nice to kind of be able to act like kids and forget about our differences and what we have or what they don’t have,” she explained.

“It was then that the (travelers) started to realize that while they thought they were coming here to change the lives of others, that it was really them that was being changed,” Burdick noted.

The day trip to Kalama, three hours away from Machakos, was another high point for many of the travelers, Burdick said. Kalama’s villagers were eager to show the Americans their new well and clinic, and they also put on an elaborate welcoming ceremony, complete with a full meal and gifts for each visitor.

“It was just very humbling to see people with so little giving us such a welcome. They were just so thankful that we were there,” O’Donnell said.

“Everyone kept saying thank you for changing our lives,” Burdick added. “Sitting there all I could think of was, ‘We should have done more.’ Clean water, health care and education are things that make life bearable. Shouldn’t everyone have access to them?”

The travelers returned home June 13 with a renewed dedication to the Kalama Project and an overwhelming urge to do more to help the people they’d met, O’Donnell said. In July they’ll give two presentations about their trip, and both presentations will end with a discussion about what their next steps might be. The first presentation will be held at 10:30 a.m. July 14 at St. Bridget Church, 15 Church St. in East Bloomfield. The second presentation will be held at 7 p.m. July 16 in Dougherty Hall, which is located in the basement of St. Mary Church, 95 N. Main St. in Canandaigua.