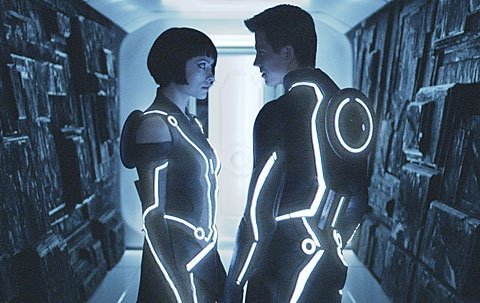 NEW YORK (CNS) — Films spawned by Pac-Man-era video arcades are like mullet haircuts. They may make for a fond memory, but actually going back there can be creepy and awkward.

Welcome to "Tron: Legacy" (Disney), in which the elements of the briskly entertaining, unpretentious and prescient 1982 cult classic have been loudly updated and turned into a bloated, stultifying 3-D bore.

Director Joseph Kosinski and screenwriters Edward Kitsis and Adam Horowitz start out with good intentions, focusing on a fight against corporate greed and the search by Sam Flynn (Garrett Hedlund) for his mysteriously vanished father, Kevin (Jeff Bridges, reprising his role in the original).

A programming genius, Kevin discovered "the grid" — an electronic Arcadia in which everyone wears figure-flattering vinyl tights with glowing accoutrements. Kevin also founded the computer conglomerate Encom some 20 years ago, but nowadays Sam only makes annual appearances at Encom to play pranks on the executive board.

Wouldn’t you know, Sam is lured back to the dusty, abandoned arcade and types in the codes to transport him to the grid. There he finds Dad trapped in exile and the alternate universe being controlled by Kevin’s evil electronic alter ego, Clu (a computer-constructed stand-in for the younger Bridges).

Before Sam finds his father, he’s tested with such gladiator-style feats from the first film as a killer disk toss and a stunning lightcycle race. He joins forces with warrior princess Quorra (Olivia Wilde), and they plot to get themselves and Kevin to the exit portal, though they face all manner of treachery along the way.

Kevin, who has taken to wearing white robes and making Zen-like pronouncements, is unhappy at the loss of his original concept of a peaceful parallel reality — or as he calls it, "bio-digital jazz, baby!"

A nice but underdeveloped message about sons and fathers is quickly lost in all the techno-funk music and special effects, making this a film best appreciated by hardcore fans of the original.

The film contains scenes of intense action and some images of severed limbs. The Catholic News Service classification is A-II — adults and adolescents. The Motion Picture Association of America rating is PG — parental guidance suggested. Some material may not be suitable for children.

Jensen is a guest reviewer for Catholic News Service. More reviews are available online at catholicnews.com/movies.