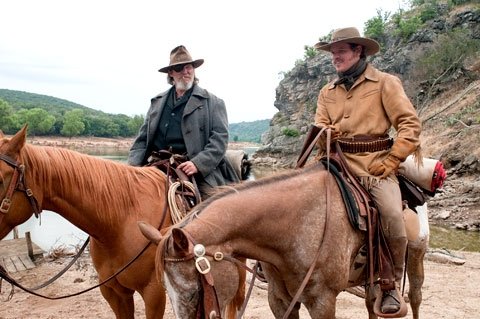 Though scenes of gunplay and other strife — together with some mildly salty language — preclude endorsement for youngsters, adult viewers will likely find this slyly witty frontier foray a captivating treat.

Tasked with organizing her father’s funeral in the wake of his murder, 14-year-old Mattie Ross (impressive newcomer Hailee Steinfeld) travels alone to the scene of the crime — the small, freewheeling town of Fort Smith, Ark. Preternaturally poised and remarkably determined, however, Mattie is intent on doing more than merely wrapping up her father’s affairs. She means to bring the sole suspect in his killing — cowardly outlaw Tom Chaney (Josh Brolin) — to account.

But Chaney has escaped into Indian Territory, and Mattie quickly discovers that the local forces of the law have no interest in pursuing him. So, based on his reputation as a dogged tracker of fugitives, she enlists the aid of broken-down but resourceful U.S. Marshal Rooster Cogburn (Jeff Bridges).

Also hunting Chaney — for a much older murder committed in the Lone Star State — is cocksure Texas Ranger LaBoeuf (Matt Damon). He eventually joins forces with Cogburn and Mattie. But the resulting alliance is an unsettled, on-again-off-again affair, strained by conflicting goals and by the comic, boastful rivalry between the lawmen.

What follows is a richly enjoyable tale enlivened by archetypical characters, a mythic atmosphere and amusingly idiosyncratic dialogue. Typical of this last element is Mattie’s characterization of the marauding gang Chaney has joined while on the run; "a congress of louts," she calls them.

While thoroughly entertaining, "True Grit" also plumbs deeper. It opens with a quotation from the King James translation of the Book of Proverbs: "The wicked flee when no man pursueth," the first of several biblical and religious references scattered through the script.

These allusions draw attention to the film’s serious reflections on the violent undertow of frontier life. Witnessed from Mattie’s sensitive perspective, the shootouts and other death-dealing confrontations that take place here are never glossed over, but are shown instead to be unnatural and difficult to absorb.

In something of a conversion story, meanwhile, Cogburn and LaBoeuf struggle to overcome their personal shortcomings and petty mutual antipathy in the service of a larger cause.

The film contains considerable, occasionally bloody violence, brief gruesome imagery, a half-dozen uses of profanity and a few crass terms. The Catholic News Service classification is A-III — adults. The Motion Picture Association of America rating is PG-13 — parents strongly cautioned. Some material may be inappropriate for children under 13.