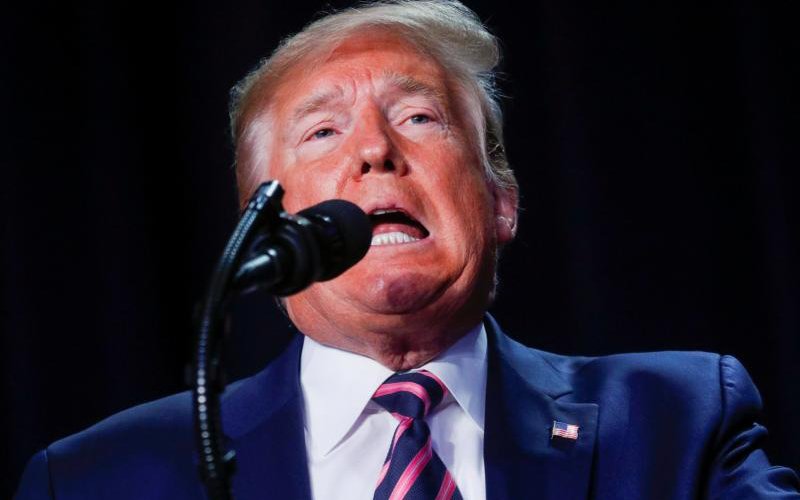 As four members of Congress and a well-known economist called for healing, unity and “love of neighbor” at the National Prayer Breakfast, President Donald Trump broke ranks and criticized Democrats for impeaching him while hailing Republicans who acquitted him.

“As everybody knows, my family, our great country and your president have been through a terrible ordeal by some very dishonest and corrupt people. They have done everything possible to destroy us and by so doing very badly hurt our nation. They know what they are doing is wrong, but they put themselves far ahead of our great country,” Trump told more than 3,000 people at the 68th annual breakfast Feb. 6 in his first public remarks following the acquittal a day earlier.

“I don’t like people who use their faith as justification for doing what they know is wrong. Nor do I like people who say, ‘I pray for you,’ when they know that that’s not so,” Trump said, in apparent references to Sen. Mitt Romney, R-Utah, and House Speaker Nancy Pelosi, D-California, who sat at the head table on stage for the event.

Romney was the only Republican who voted to impeach Trump on one of two counts he faced. In explaining his vote Feb. 5, Romney cited his Mormon faith as guiding his decision.

Pelosi used sharp words Dec. 5 in response to a reporter’s question about whether she hated the president after she cleared the way for House Democrats to begin drafting articles of impeachment.

“And as a Catholic, I resent your using the word hate in a sentence that addresses me. I pray for the president all the time. So don’t mess with me when it comes to words like that,” she added.

Trump’s initial comments contrasted with prayers offered by four members of Congress: Rep. Kevin McCarthy, R-California, House minority leader, who is Baptist; Rep. David Kustoff, R-Tennessee, who is Jewish; Rep. Xochitl Torres Small, D-New Mexico, who is Lutheran; as well as Pelosi. All four prayed that the country would treat others with dignity and respect and to express God’s love in daily life.

Moving on, Trump recapped several actions his administration has undertaken including steps to support prayer in classrooms, aid persecuted religious minorities such as the Yazidis in Iraq and Christians elsewhere, and policies to protect unborn children.

Trump specifically mentioned the introduction Feb. 5 of the international Religious Freedom Alliance. He said about 25 nations had joined the effort. Secretary of State Mike Pompeo first announced the alliance at the second annual Ministerial to Advance Religious Freedom last July.

“Faith keeps us free. Prayer makes us strong. And God alone is the author of life and the giver of grace,” the president said.

In his 25-minute speech, Trump pledged to protect people of faith, ministers, rabbis and others from what he characterized as ongoing attacks on religious practice. “We won’t let that happen,” he said.

Economist Arthur Brooks, a Catholic convert, encouraged the nation in a 10-minute presentation to overcome “the crisis of contempt and polarization tearing our society apart.”

Despite deep differences, Brooks said, this time of crisis offers “the greatest opportunity we have ever had as people of faith to lift our nation up and bring people together.” The answer, he said, is realizing Jesus’ call to love one another.

The times require that people act with “moral courage” to buck the trend of divisiveness expressed in public and through social media, the faculty member at Harvard University’s Kennedy School of Government said. In a democracy, different ideas on how the country can move forward should not simply be berated but welcomed, he said.

Such work is difficult, Brooks admitted, but is vitally needed to unite the country.

Brooks closed by reminding people that their work beyond the walls of the banquet room was missionary territory, where national healing can begin.