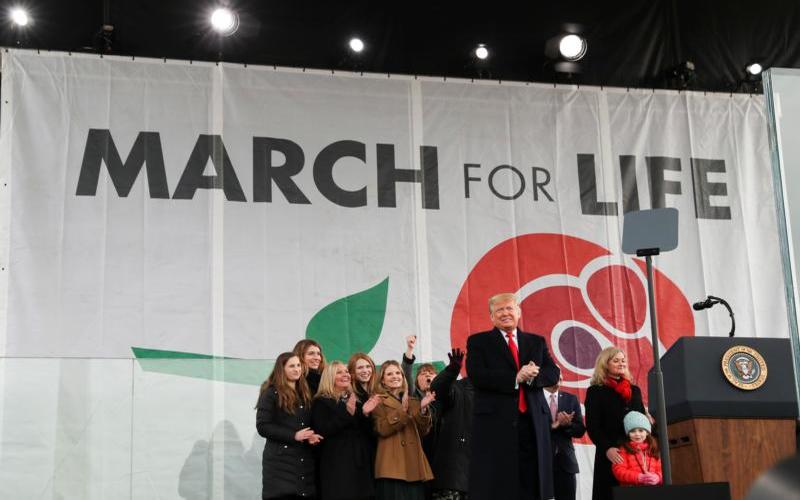 U.S. President Donald Trump applauds after addressing thousands of pro-life supporters during the 47th annual March for Life in Washington Jan. 24, 2020. He is the first sitting president to address the pro-life event in person. (CNS photo by Leah Millis, Reuters)

WASHINGTON (CNS) — The University of Notre Dame’s O. Carter Snead said it was “a good thing when the president of the United States — whomever he or she may be — attends an event meant to celebrate and defend the intrinsic equal dignity of all persons, born and unborn.”

“But there should be no mistake — the movement to protect and support all members of the human family, including mothers and their unborn babies, transcends politics and partisanship,” he said Jan. 23.

Snead, who specializes in bioethics and is director of Notre Dame’s Center for Ethics and Culture, added that the pro-life movement “is a movement grounded in radical hospitality and unconditional love that all people of goodwill can support.”

He issued the statement the morning after March for Life officials announced that President Donald Trump would speak in person to the crowd on the National Mall Jan. 24 — becoming the first sitting president to do so.

The news that Trump would be on the speakers’ platform drew praise from March for Life officials and leaders of other pro-life organizations, who said the administration is consistently championing life, through policies to fight abortion, implementing conscience protection and the appointment of pro-life judges.

But critics said his “anti-life” policies on migrants, refugees and the poor made him ineligible to speak to a pro-life crowd.

Outside of the security barrier where Trump spoke, Franciscan friars and their supporters were among some in the crowd who held signs highlighting a range of such issues. This group’s signs had such messages as “I am 100% Pro-Life,” “Care for the Unborn,” “Protect the Earth” and “Seek Justice for the Poor.”

A priest in the Baltimore Archdiocese, Father Jeffrey Dauses, pastor of St. Andrew by the Bay in Annapolis, wrote on his Facebook page ahead of the March for Life that once he found out Trump would address the crowd, he was “feeling really, really conflicted about attending.”

“While he may be anti-abortion in some ways, he is most definitely NOT pro-life,” wrote Dauses. “His callous disregard for the poor, for immigrants and refugees, for women… Pro-lifers – wake up… this man is not pro-life. He is pro-himself.

John Gehring, Catholic program director at Faith in Public Life Action, said in a tweet said that “this kind of ‘respect for life’ is partisan, selective & lacks credibility.” He also accused “anti-abortion leaders celebrating Trump attending the March for Life” of having “nothing to say about the administration’s vile, inhumane and well-documented abuse of immigrant children.”

“Anti-abortion leaders and voters who hitch their wagons to President Trump do serious damage to the credibility of the pro-life movement,” he said in another tweet.

When asked about such criticism over Trump speaking at the March for Life, Kristan Hawkins, president of Students for Life of America, told Catholic News Service in an email Jan. 23: “There are a lot of issues as a Christian and as a woman that I’m concerned about but none are as important as abortion that ends the lives of 100 babies every hour of every day.”

“It is undeniable that no other president has done more to abolish abortion and advance our movement than President Trump,” she said. “The issue of abortion deserves to be the number-one single issue driving voters to make their voices heard. I resent the fact that people are trying to take over the pro-life movement with their own agendas.”

Students for Life of America always has a strong presence at the annual march. Through groups at colleges, high schools, middle schools, law schools and medical schools across the country, the organization works to “educate other young people about the violence of abortion, create new pro-lifers, and transform campuses into places that support pregnant and parenting students,” as its mission statement says.

In his statement, Snead, who attended the March for Life with 800 students from Notre Dame, said that his experience of the march “is that it draws women and men of all ages, backgrounds and points of view who are bound together by their shared commitment to the weakest and most vulnerable among us.”

In the crowd gathered at the Supreme Court before marchers arrived at the rally, three women held signs that said “I regret my abortion.”

The women — two from Charlotte, North Carolina, and one from Portland, Oregon — said they chose not to attend the rally this year, not because Trump was speaking, but because they wanted to be at the court as people got there.

In fact they were impressed Trump addressed the crowd on the National Mall. Katherine Hearn, from Charlotte, said it took someone who has no fear of what people would think to get in front of the crowd that day.

When asked about Trump’s appearance at the rally, marcher Drew Timmermeier, a freshman at Southern Illinois University in Edwardsville, said: “Politics doesn’t matter to me. As long as abortion is legal, we’ll still be here.”