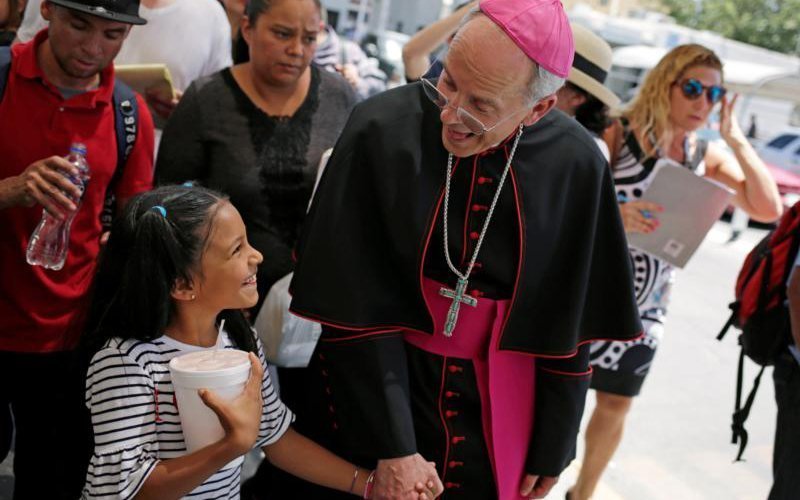 Bishop Mark J. Seitz of El Paso, Texas, shares a smile with a Honduran girl named Cesia as he walks and prays with a group of migrants at the Lerdo International Bridge in El Paso June 27, 2019. (CNS photo by Jose Luis Gonzalez/Reuters)

EL PASO, Texas (CNS) — By requiring Brazilians seeking asylum in the United States to stay in Mexico while their immigration cases are reviewed is an unacceptable expansion of the Trump administration’s already “indefensible program,” said a Catholic bishop who heads a Texas border diocese.

“A year of Remain in Mexico has damaged enough human lives, hurt enough families and chipped away far too much at our country’s commitment to life, dignity and the protections that should be afforded to asylum-seekers and refugees,” El Paso Bishop Mark J. Seitz said in a statement.

“Remain in Mexico” is the popular name for the administration’s Migrant Protection Protocols, also called MPP, which was rolled in early 2019.

On Jan. 29 of this year, the administration announced the policy will now include Brazilians. They are the first non-Spanish speaking group to be covered by the policy; Portuguese is the first language of the vast majority of Brazilians.

“It is unfortunate that on this sad anniversary, the government should expand this indefensible program to Brazilians,” Bishop Seitz said in his Jan. 31 statement. Because they do not speak Spanish, they are “thus made even more vulnerable to criminal predation and exploitation,” he added.

Overall the “Remain in Mexico” policy, he continued, “unnecessarily” places Border Patrol agents and Customs and Border Protection officers in a “lamentable position.” These law enforcement officials who “are in the pews of our churches” have to choose “between following the laws of conscience or the morally bankrupt dictates of man when they encounter human beings in need, who represent for us Christ, hidden beneath the guise of misery, fear and desperation.”

Bishop Seitz concluded his statement by saying: “May our consciences not be dulled and may those with the power to end ‘Remain in Mexico,’ and every inhumane action against the one human family, hear our voices shouting out in the desert for compassion and for justice.”