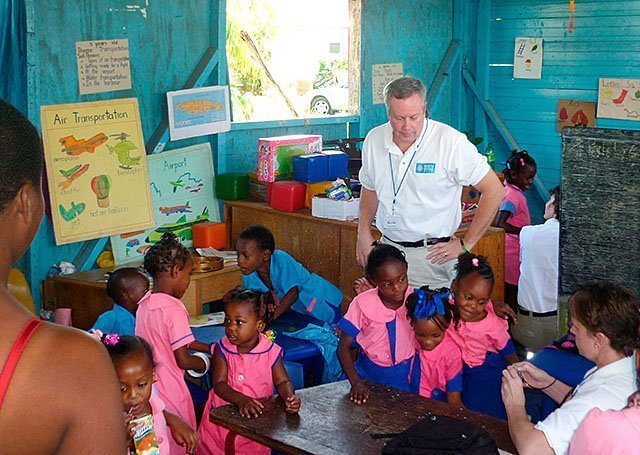 Deacon Kevin Carges visits the original High House Basic School in McCook’s Pen, Jamaica, in February before joining the students for the inauguration of their new school building.

"If you just put your trust in God, amazing things happen."

That’s what the past eight years have taught Deacon Kevin Carges, who serves at Our Lady of Peace Parish in Geneva.

When Deacon Carges was ordained by Bishop Emeritus Matthew H. Clark in May 2005, he didn’t yet know where his vocation would take him. He trusted God and knew he was being called to the permanent diaconate but wasn’t exactly sure why, he recently told the Catholic Courier.

In the same way, he didn’t know what he was in for when he accepted a fellow deacon’s invitation to travel to Jamaica on a service trip. He’d always enjoyed volunteering in soup kitchens and homeless shelters and assumed he’d be doing similar work in Jamaica, but he was very wrong. He didn’t fully realize the magnitude of the country’s need until he stood in a landfill and watched families dig through rotting garbage in search of food and items to sell.

Deacon Carges now believes God used that trip to point him along the path he was being called to take. His experiences in Jamaica inspired him to found Eight 4 World Hope with the help of six fellow 1984 graduates of St. John Fisher College in Pittsford. The like-minded alumni are dedicated to helping the needy in developing countries both by raising money for specific projects and by raising awareness of their plight. Since founding the group in 2009, they’ve already raised more than $100,000 and completed projects at four needy schools in Jamaica.

"We’re touching the lives of over 700 children each year through education. It’s really divine. God has just kind of guided us along the way and opened doors for us. It’s incredible," Deacon Carges said.

Eight 4 World Hope’s first and third successful projects resulted in the construction of new schools in impoverished areas where the children had either been attending school in a shack or not at all. Upon completion of the group’s second and fourth projects, new and sanitary restroom facilities were built in schools that previously had been using outdated and unsanitary pit latrines. It only took $11,000 to build a new restroom facility with a septic system, flushing toilets and sinks with running water at Planters Hall All Age and Infant School, a school the government had ordered to close because the previous latrine was unsafe. It seems miniscule in comparison with the huge budgets of many American school districts, but that $11,000 allowed 186 children to continue their education at the only school in their community, Deacon Carges said.

Not content to bask in the glow of its success so far, the group already has embarked on its fifth project, through which it hopes to raise enough money to expand and repair a severely overcrowded school that sustained extensive damage when Hurricane Sandy struck in October 2012. Eight 4 World Hope already is planning several fundraisers to support this project, including a wine and cheese reception at St. John Fisher in February, he said.

Deacon Carges also is trying to raise awareness of Jamaican’s plight and his group’s efforts through the publication of his new book, titled God Took My Hand. Deacon Carges has visited Jamaica, Haiti and Nicaragua through his work with Eight 4 World Hope and his role as a Global Fellow for Catholic Relief Services, which is sending him to Kenya in January. He penned the book in order to share the stories of the joyful and faith-filled people he’s met on his travels to developing countries.

"I have so many stories in my mind and my heart, and I wake up with them every day," explained Deacon Carges. "The poor over there, all they have is family and faith, and it was a real beautiful thing because they just are so happy, so joyful. They love life and realize what a gift every day is."

The book also shares the story of Deacon Carges’ call to the permanent diaconate and the way God has worked in and through his life, he added. Proceeds from the sale of the book will be added to Eight 4 World Hope’s coffers and used to fund future projects, but Deacon Carges said he doesn’t plan to launch a large-scale marketing campaign to promote his self-published book.

"I’m just putting my trust in God and it will be read by the people that need to read it. I figure God will take care of that end for me," he said.

EDITOR’S NOTE: To learn more about or support Eight 4 World Hope, visit www.eight4worldhope.org. Both hard copies and digital versions of God Took My Hand are available for purchase at www.amazon.com.

Tags: Faith in Action, Holy Orders, Ontario County News
Copyright © 2022 Catholic Courier, Inc. All rights reserved. Linking is encouraged, but republishing or redistributing, including by framing or similar means, without the publisher's prior written permission is prohibited.