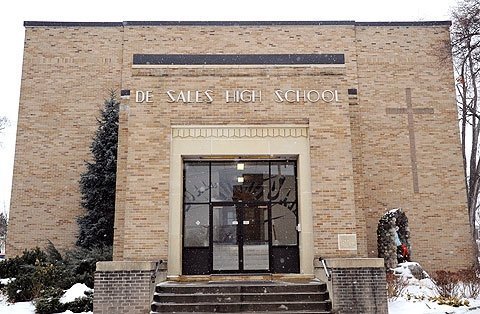 DeSales High School in Geneva will not open for the 2012-13 school year.

DeSales High School in Geneva will not reopen in September. The school’s board of trustees voted to close the 100-year-old Geneva institution during an emergency meeting held July 31.

"While the decision to end the school’s long tenure is difficult for all who love DeSales, we felt it was the only responsible course given the many admirable efforts to raise needed funds and boost enrollment, both of which fell short of the minimum needs to sustain the school now and in the future," Peter Cheney, president of the board of trustees, said in an Aug. 1 statement.

In May the trustees had stated that the school needed to raise $200,000 by June 30 in order to open for the 2012-13 school year. It was the third consecutive year the school had launched a last-minute fundraising campaign in order to reopen for the following year. DeSales was still $90,000 short of its $200,000 goal by June 28, but the trustees were confident the school’s enrollment and financial goals were within reach and resolved to keep the school open, pending approval from DeSales’ corporate board, which includes diocesan officials.

Cheney and members of DeSales’ staff and school family worked hard to fill the school’s coffers and its seats, but ultimately were unable to garner the support they needed. Alumni contributions were particularly disappointing, with a mere 5 percent of alumni making donations, Cheney told the Catholic Courier.

DeSales also needed a bare-minimum enrollment of at least 105 students in order to make its budget for the 2012-13 school year, but as of July 30 just 85 were enrolled, Cheney said.

"If we had 105 students we could have made it happen, and it would have happened. This was a very realistic budget, and we just didn’t have the support," he added.

When the corporate board met July 30, Cheney said that he couldn’t realistically assure the board that DeSales could meet its goals. There was a strong possibility the board might have recommended DeSales’ closure at that point because the school lacked the necessary funds to support itself, said Anne Willkens Leach, superintendent of diocesan schools.

Instead, however, Cheney asked DeSales’ corporate board to allow the school’s board of trustees to make the final decision. The corporate board agreed, Willkens Leach said, and Cheney called an emergency meeting of DeSales’ trustees July 31.

After two hours of emotional discussion, the board of trustees voted to close the school.

"We made the only decision that we could at this time," Cheney said.

Once the decision was made, the school building and grounds reverted back to Geneva’s Our Lady of Peace Parish, which is made up of the former St. Francis de Sales Parish, which founded the school, and neighboring St. Stephen Parish.

Cheney also believes social media played a role in the school’s demise. When the Finger Lakes Times ran an article in late July that raised doubts about the school’s future, he said the resulting Facebook discussions helped fear take hold.

"Families started jumping ship. We lost at least 10 families because of Facebook. If we did not have social media, DeSales would probably be open today," Cheney remarked.

Coincidentally, Facebook also provided the way many people learned of the school’s closing, as the news broke on the social-media site within an hour after the trustees’ meeting ended, he added.

Facebook also provided a venue for Cheney to offer gratitude to the DeSales family through a statement posted there Aug. 1.

"Words are not sufficient to express our gratitude to you, the DeSales family. Our students and their parents showed patience and courage. Our staff showed incredible loyalty. Our alumni provided financial support and helped spread the word of our plight. This speaks much of the lasting legacy that is DeSales," Cheney wrote. "May God grant us peace and understanding in the weeks ahead and offer solace and comfort to those most affected by this decision."