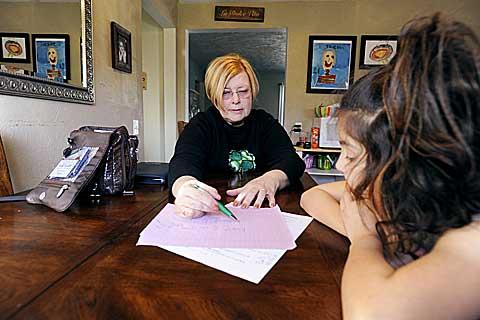 ROCHESTER — Ten-year-old Estrella Valle is a fighter. She fought her way back to health after being diagnosed with leukemia at the age of 6, and after returning to school she fought to keep up with her classmates, even though she’d missed quite a bit of school. When the fight became too much for her, however, Linda Bolan was there to give her a Boost.

Boost, a supplemental tutoring program, works in conjunction with CURE Childhood Cancer and Rochester’s Strong Memorial Hospital to provide tutors for children with cancer. Bolan, a retired teacher, founded Boost in November 2007 and immediately began recruiting retired educators who were interested in becoming volunteer tutors. Bolan herself has been working with Estrella since the beginning of the 2009-10 school year.

Estrella missed so much school that she is probably about two years behind most of her classmates, according to her mother, Kimberly Cantin. School officials wanted to hold Estrella back, but Cantin urged them to let her daughter advance to the next grade with her classmates, Cantin told the Catholic Courier during a March 17 interview at the family’s home.

"She’s aware that she has a lot of catching up to do. She wants to learn," Cantin said.

By the beginning of the 2009-10 school year, however, Estrella had become very frustrated.

"She was falling behind in school and got in a little bit of trouble," Cantin recalled.

Cantin mentioned Estrella’s difficulties to Kathryn Wissler, the education liaison at Strong’s department of pediatric hematology and oncology. Wissler told Cantin about Boost, and put Bolan in touch with Cantin. Bolan agreed to tutor Estrella, and also told the girl to call her cell phone any time she had a question or problem with her homework. Estrella took up Bolan on that offer and usually calls her once or twice a week, Cantin said.

One time Estrella even reached her tutor while Bolan was out of state on vacation, and Bolan was able to help the girl through a homework snag while dining at an Indiana restaurant. Bolan said she didn’t mind the interruption at all and is just grateful for the chance to be able to assist Estrella even from afar.

Bolan, a member of St. Dominic Parish in Shortsville, is passionate about helping children with cancer. Her grandson, Willem David Bolan, was only 6 weeks old when he was diagnosed with leukemia. In 2007 Bolan retired after more than four decades of teaching with the intention of taking care of Willem, but that was not to be. Willem was only 8 months old when he died on Oct. 4, 2007.

"I said I was going to do something in his memory, and this is what I came up with," Bolan said.

"Schools typically will give one to two hours a day of tutoring if (the children) are out for a legitimate reason, and a lot of times that’s not enough for a kid to keep up," Wissler told the Courier.

It’s not unusual for children undergoing cancer treatment to miss as much as six months of school at a time, Bolan said. Even when they’re doing better, many young cancer survivors still frequently miss school for doctor appointments, checkups and bloodwork, she added.

Children battling cancer often appreciate school more than their peers, perhaps because it’s part of a normal life that they no longer take for granted, Bolan said.

"They’re usually high achievers. They love school and they miss it. They want to get back in the swing of things," she said.

Bolan and Wissler thought children and parents alike would welcome supplemental tutoring to help them catch up with their classmates, Wissler said.

"It wouldn’t take the place of what schools are doing, but it would be in addition to that. They may still need that boost to keep up," she said.

Bolan so far has recruited about 15 retired teachers, and is looking to expand the ranks of Boost’s tutors.

"It is usually one or two hours a week at the convenience of the tutor and the child. It’s usually done during the day and it’s very flexible. It’s so rewarding," Bolan said.

Bolan is looking for retired educators from all parts of the diocese, since Strong treats children who live in the Finger Lakes and Southern Tier regions as well as the Rochester area. She’s also looking for teachers from all grade levels and all subjects. Teachers may be on the tutor list for months before being matched with students in their geographic areas whose needs match their areas of expertise. However, just knowing that there are teachers out there willing to help these students gives cancer patients hope, Bolan said.

"I think it makes the kids feel better to know they have someone to turn to," Cantin said. "I think we could use a lot more Lindas."