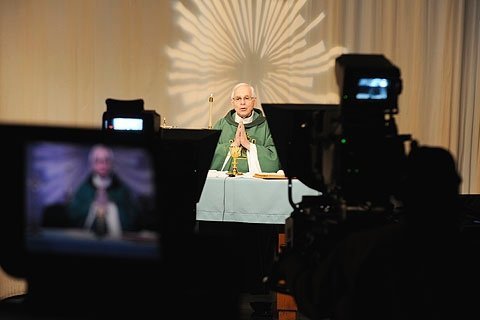 Father Thomas Mull is framed by cameras as he celebrates Mass in the Channel 10 WHEC-TV studios in rochester Nov. 3. The priest has been celebrating the televised Masses since 1982.

ROCHESTER — A regal church edifice it was not.

No stained-glass windows; no pews. Not even a congregation save for the lector, Sharon Henry, and a couple of men adjusting an overhead light just before Mass began Nov. 3.

Seconds later, the red camera light went on for what actually is a wide audience — Catholics across western New York who could not get to church on Sunday yet took part in this Mass by watching it on TV three days later.

The “Mass for Shut-Ins” has aired on WHEC TV-10 for the past 44 years. The liturgy is taped each Thursday and broadcast the following Sunday from 7:30 to 8 a.m. Week in and week out, Father Thomas Mull, pastor of St. Mary, Canandaigua, and St. Bridget/St. Joseph, East Bloomfield, arrives at WHEC on East Avenue for taping that begins shortly after 12:30 p.m. in the news studio. Consisting only of an altar and an ambo, this makeshift “church” sits a few feet from the news anchors’ desk.

Father Mull first celebrated the television Mass some 29 years ago, when Bishop Matthew H. Clark asked him to fill in for three months. The would-be temporary gig became increasingly steady before Father Mull took over as principal celebrant beginning 15 years ago. Guest presiders still fill in occasionally, such as when Bishop Clark celebrates Christmas and Easter Masses.

The television liturgy’s allotted air time is 27 minutes — no more, no less: “You’re in and out,” Father Mull said. So although musicians appear at times, this most often remains a no-frills Mass. Father Mull noted that guest presiders tend to struggle to adapt their homilies to the time limitations.

With the advent of cable television, several other Masses are now available on the local airwaves. But Father Mull said the Channel 10 liturgy remains popular because of its local flavor and comparatively short running time. He added that WHEC provides the weekly time slot as a public service.

Father Mull said he has developed friendships with several of WHEC’s on-air personalities and crew members; on Nov. 3 the priest distributed Halloween candy to the staff.

He also acknowledged that he’s acquired a bit of celebrity through the TV Masses, noting with a chuckle that Sunday-morning hospital visits have caused confusion for folks seeing him in the flesh and on the TV screen at the very same time.

“People walk by and do a double-take,” he remarked.