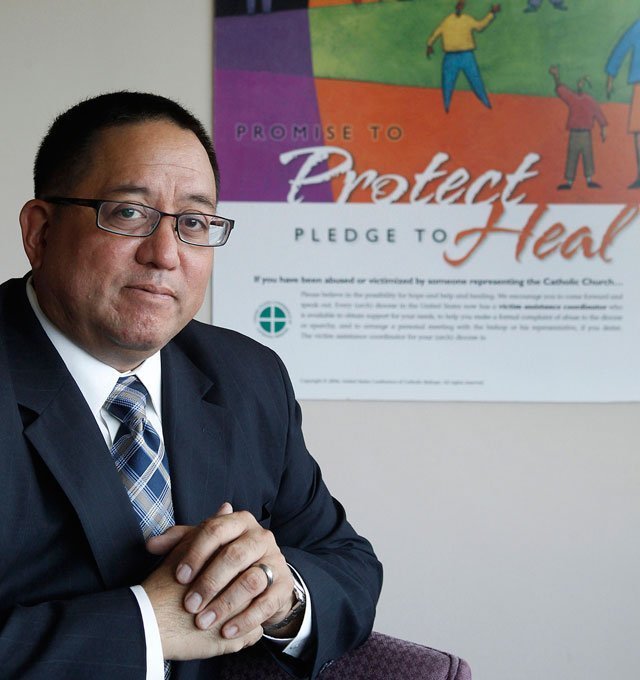 Deacon Bernard Nojadera, director of the U.S. bishops' Secretariat of Child and Youth Protection, is pictured in 2012 at the U.S. Conference of Catholic Bishops in Washington.

WASHINGTON (CNS) — Because the "Charter for the Protection of Children and Young People" is a "living document" open to differing interpretations, those in charge of implementing the charter at the diocesan level face a variety of challenges, according to the head of the bishops’ national office.

"We’re dealing with a charter that is loose in the way it is written … in order to respect the bishop’s right to govern his own diocese," said Deacon Bernie Nojadera, executive director of the Secretariat for Child and Youth Protection at the U.S. Conference of Catholic Bishops in Washington.

"We’re 12 years into the (sex abuse) crisis and we’ve done quite a bit to get to where we are," he added, referring to the first audit after the 2002 adoption of the charter by the bishops in Dallas. "But there are always things to learn."

Deacon Nojadera said U.S. Catholics at every level need to guard against "a tendency for complacency" toward the sex abuse crisis.

"We have established procedures and policies, and we think that we have that in place," he told Catholic News Service. "There might not be that ongoing mindfulness and certain small things might start to slide. They are not really paid attention to the way they should."

In a separate interview, Francesco Cesareo, chairman of the National Review Board, echoed Deacon Nojadera’s concerns. The board is the all-lay group that monitors dioceses’ performance in dealing with sexually abusive priests and creating a safe environment for children throughout the church.

"We have made significant strides in the church to deal with questions of sexual abuse, and many aspects of the charter are now instituted in dioceses and parishes," said Cesareo, who is president of Assumption College in Worcester, Massachusetts. "But we have to make sure that we pay attention to the details in the charter and be diligent."

In a June talk to the U.S. bishops in St. Louis, he outlined a number of recommendations to boost the charter’s effectiveness and clarify its requirements. Some of those recommendations might be incorporated into proposed charter changes that will come before the bishops in November;a draft of the proposed changes has not been made public.

Asked which of his recommendations he considered the most crucial for the bishops to adopt, Cesareo said he believes every allegation of sex abuse or boundary violations should be presented to the diocesan review board.

"This allows the bishop not to have to rely on a gatekeeper to determine if an allegation needs" further investigation, he said. "Every allegation is given that same level of scrutiny. … In our review of cases that went wrong, what we found often is that allegations did not go before the diocesan review board."

Another problematic area is that the charter calls for diocesan review boards to meet "regularly" but regularly is not defined, Cesareo said. "In many dioceses the board meets quarterly, others only once a year," he said. "Some only meet when there is an actual allegation."

But for review boards to work effectively, they "have to come to understand their role and know how to effectively implement that role," he added. A meeting might be scheduled just to review diocesan policies and to discuss the board’s role, he said.

Another challenge facing the bishops’ child protection efforts is budgetary concerns, Deacon Nojadera said. "Some of our colleagues are wearing four or five hats," he said. "They are trying to do what they can with a limited budget."

Only a few church jurisdictions have the resources that the Archdiocese of Chicago, for example, devotes to its child protection efforts. Its Office for the Protection of Children and Young People has four divisions — child abuse investigations and review, office of assistance ministry, safe environment office, and prayer and penance program — and a staff of 10.

But in some dioceses, the chancellor or school superintendent might also head up the local church’s child protection office. In others, Deacon Nojadera said, it might be "a one-person operation" or an office entirely staffed by part-time volunteers. "It runs the gamut," he said.

Eastern-rite Catholic dioceses, called eparchies, face special challenges in complying with the charter’s requirements because they are spread out geographically across the country, making it difficult to conduct mandated training sessions for clergy, volunteers and children in the eparchy.

Under canon law, dioceses and eparchies cannot be required to participate in the audit, but it is strongly recommended.

Deacon Nojadera said the USCCB has been encouraging larger dioceses to "share resources and talents" with smaller, budget-challenged dioceses and eparchies. In addition, diocesan officials can network and share ideas at an annual conference, he said.