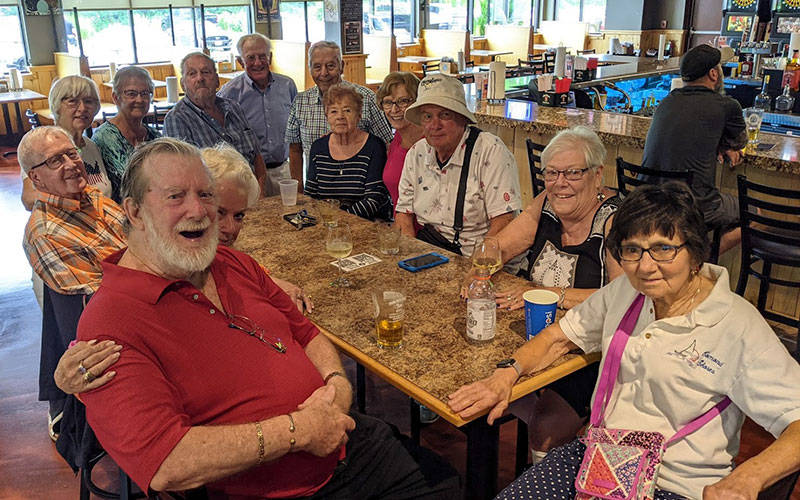 This year marked not one, but two reunions for the former St. Charles Borromeo School, Greece, Class of 1956.

According to Carol Sharpe, reunion organizer, a casual lunch was recently held at a Bill Gray’s restaurant, followed by a memorable day at classmate Pat (and Barb) Maginn’s Conesus Lake home.

Sharpe noted that the class had not gathered since 1956, as eighth-graders, until a successful 50th reunion took place in 2006. There were 52 in attendance for that event at Valicia’s Ristorante — 28 classmates and spouses, and two of the class’s teachers, Sister Esther and Sister Dismas.

“We all agreed not to wait another 50 years to see each other again,” she remarked. “Thus, we began meeting summers in Rochester and winters for those classmates who resided in Florida and the snowbirds. We would meet mostly at Schaller’s, when an out-of-town classmate was visiting Rochester, so as to include them. It turned out to be, what is referred to as, our ‘core group’ of die-hards.”

For its 60-year reunion, the Class of 1956 returned to Valicia’s in 2016 for another formal gathering, with 40 in attendance.

Sharpe said that 87 students in all made up the two eighth-grade classes from 1956, and that “there are 35 deceased classmates that we’re aware of.”

She said she hadn’t anticipated how close the St. Charles Borromeo classmates would end up becoming, after having not seen each other for 50 years until the 2006 reunion.

“Now that we have reunited, there’s such friendship and memories that we’re bonded forever. It doesn’t matter where we met. Just being with this group from yesteryear is priceless,” she stated.