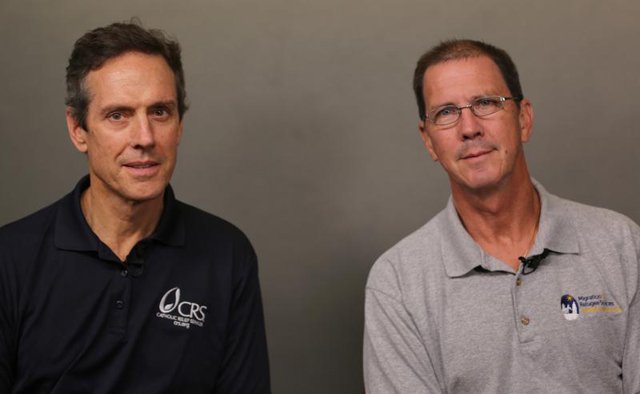 Sean Callahan, chief operating officer of Catholic Relief Services, and Bill Canny, executive director of the U.S. bishops' Migration and Refugee Services, are pictured during an interview in Washington Aug. 26.
By Mark Pattison
Catholic News Service
WASHINGTON (CNS) — Even in the last years of her life, Blessed Teresa of Kolkata had a profound impact on those anywhere near her orbit, including two young Americans who grew into leadership positions in the U.S. Catholic Church.
One of them, Sean Callahan, met Mother Teresa when he was East India director for Catholic Relief Services, the U.S. bishops’ international aid and development agency, starting in 1994 and based in Kolkata, then called Calcutta. He worked with Mother Teresa in his official capacity with CRS and as a volunteer with the Missionaries of Charity’s Center of the Dying. Callahan is now CRS’ chief operating officer.
The other, William Canny, spent 25 years in various capacities at CRS, including time in the mid-1990s in Kolkata, before being named last year as the executive director of the U.S. bishops’ Migration and Refugee Services.
In a joint interview with Catholic News Service Aug. 26 — the centenary of Mother Teresa’s birth — they shared vivid memories of their interactions with her.
Mother Teresa could part traffic almost as if she were Moses and Kolkata’s street dwellers, pedestrians, bicyclists, rickshaws and cars were the Red Sea. "Mother is coming!" was the call, Canny said, and that was enough for people to squeeze toward the sides of the streets and let her pass in her Indian-made Ambassador car.
Callahan told of one time when flooding in neighboring Bangladesh had uprooted the lives of thousands of Bangladeshis.
"I received a call from Mother Teresa who had heard there was a flood in Bangladesh and asked if I could bring supplies in trucks because the sisters there were asking for them," Callahan said. "I explained that to do that would require special permissions from the governor of the state to take the food and emergency supplies across the border. She asked, ‘What do I need to do?’ and I told her she needed to get the permissions.
"’OK,’ she said. ‘Meet me here in two hours. You get the trucks; I’ll get the permission.” Callahan rounded up the trucks and met Mother Teresa in the same spot. She had not only obtained the permissions, but brought some Missionaries of Charity to ride with the trucks to let Indian and Bangladeshi border patrols know that the convoy was on a mission of mercy.
Callahan said, "It’s no accident that this canonization is happening in the (Jubilee) Year of Mercy." He noted that members of other religions would approach him while Mother Teresa was alive and say, "Why hasn’t your church made her a saint already? We recognize her as a saint!"
He recalled volunteering one day at the Center of the Dying and was one of two men assigned to take trash and other refuse to a garbage heap. He remembered that because people died every day inside the center, often from an infectious disease, the garbage had to be handled gingerly. To avoid touching it, he and the other person had the trash in buckets with a pole that ran through the buckets. When they got to the garbage heap, they would just heave the buckets, still attached to the pole, in the direction of the heap.
What startled Callahan, though, was that one woman almost immediately scurried over to the garbage heap to sort through the new additions. "She was the real face of poverty," he said. And then, "Mother saw this and motioned for her to come inside," Callahan told CNS. Both he and Canny used the shorthand "Mother" frequently to refer to Mother Teresa.
Both Callahan and Canny had seen Mother Teresa weaken during their time in India. Callahan had to leave India early because of a liver malfunction that required immediate care that India’s filled hospitals could not provide.
But after Mother Teresa had been hospitalized and had been in what Canny called a "semi-comatic" state, he began to wonder what kind of planning had been done for a possible funeral. The archbishop of then-Calcutta had told him, "I’m scared to think about it."
While India had grown open to foreign investment, government restrictions on foreign television outlets operating inside the country were still stringent. Canny worked to ease those restrictions.
They came in handy, as Mother Teresa died Sept. 5, 1997, a week and a half after turning 87 – and less than a week after the death of Princess Diana. News outlets worldwide raced to cover the death and funeral of Princess Diana, whose adult life had been tabloid fodder. But after the death of Mother Teresa, a woman of considerably more substance, "the networks felt compelled’ to cover her as well, Canny said.
There was little doubt to Canny that he had been in the presence of a saint. He recalled meeting Mother Teresa. "Just having her touch me in a friendly away, I just felt an incredible warmth through her fingertips. It was a remarkable feeling I’ll never forget. It gave me the feeling I was meeting someone extra special," he said,
On another occasion, Canny told CNS, "I was in the chapel one time praying. It was 100-plus degrees. No electricity. It was the middle of the afternoon, and I was sweating profusely. And suddenly a cool wind came to me, and through me, and started cooling me down. And as I looked down, Mother Teresa had come into the room and had knelt down and begun praying."
Her canonization is coming one day shy of the 19th anniversary of her death. There was almost an inevitability that Mother Teresa would one day be made a saint, Canny said: "I’m guessing we would find many, many more (miracles) if the process continued."
Copyright © 2022 Catholic News Service, Inc. All rights reserved. Linking is encouraged, but republishing or redistributing, including by framing or similar means, without the publisher's prior written permission is prohibited.