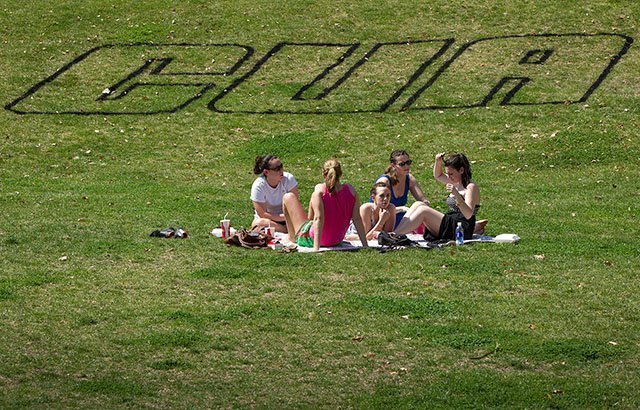 Students enjoy a warm April afternoon on the campus of The Catholic University of America in Washington in 2013. The university is one of 55 colleges and universities facing Title IX investigations for their handling of sexual assault complaints, according to a report released May 1 by the U.S. Department of Education.

WASHINGTON (CNS) — Two Catholic colleges were listed in the group of 55 colleges and universities facing Title IX investigations for their handling of sexual assault complaints, according to a report released May 1 by the U.S. Department of Education.

The education department said it will keep an updated list of schools facing these investigations and make them available upon request.

"We hope this increased transparency will spur community dialogue about this important issue," said Catherine Lhamon, the department’s assistant secretary for civil rights.

In a statement, Lhamon said a school’s appearance on the list does not mean that it has violated the law but that an investigation is ongoing.

A statement from Regis University said the university has one complaint pending before the Office of Civil Rights which stems from an alleged incident in 2011.

"Regis University takes the complaint seriously and has responded appropriately," the school statement said, adding that because of confidentiality requirements school officials "cannot discuss the specifics of the matter."

"The complaint concerned the investigation and adjudication of a report of sexual assault that occurred in December 2012," Nakas said in a statement.

He said the university has "cooperated fully with the Department of Education to provide all of the information that the department has requested in a timely manner. It will continue to do so and is confident that there will be a just resolution of this matter."

The White House task force investigating sexual assault issues on college campuses said one in five female college students today has been assaulted, but only 12 percent of these attacks are reported.

The task force also announced the creation of the website — www.notalone.gov — which provides resources for victims and information about enforcement actions on campuses. It also is providing recommendations for schools about conducting surveys to better gauge the frequency of sexual assault on their campuses.