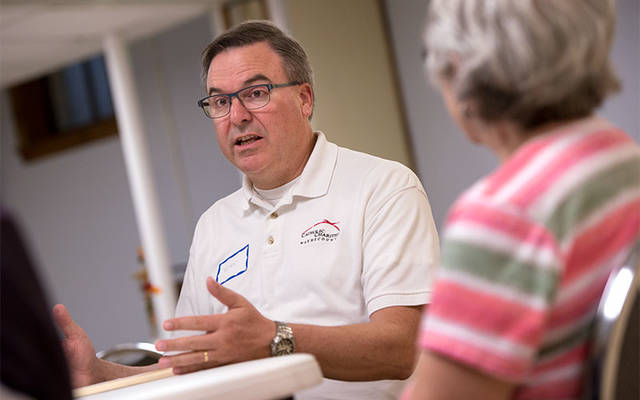 “It was like drinking from a fire hose for the first few weeks.”

Deacon Peter Dohr used that phrase to describe how he felt last fall as he simply tried to keep up with the flood of emails landing in his inbox each day. In October, Deacon Dohr, who since 2013 has served as executive director of Catholic Charities of Wayne County, took on the additional role of executive director of the neighboring Catholic Charities of the Finger Lakes.

The exponential increase in the volume of his emails represented just one small part of the greatly increased daily responsibilities Deacon Dohr now shouldered, yet he met his new challenge head-on, embracing it with open arms and a sense of optimistic enthusiasm.

“When It felt to me like maybe 5 percent of it might be a burden, but 95 percent of it is going to be energizing and exciting and challenging,” Deacon Dohr said.

“She and Jack called me together to discuss (whether) I would be willing to see if there was a way to be of assistance to both agencies,” Deacon Dohr said, noting that he told them he was “certainly willing to be of help.”

After the boards of directors for both agencies gave the green light to the idea of sharing an executive director, Deacon Dohr took the reins of Catholic Charities of the Finger Lakes the same day Wayne left.

The agencies didn’t lose any gap time, but that doesn’t mean the transition was effortless, he noted.

Both Deacon Dohr and Brewster admit that managing their dual roles was a daunting task at first, and both were worried they’d somehow miss something important. Deacon Dohr said he knew from the beginning that he’d have to delegate some things, but he was surprised and humbled to find out just how many of those things there would be. His colleagues at both agencies stepped up to help without hesitation, he added.

“When I’ve asked for help and delegated items, everyone has been very supportive,” he said. “There are such strong teams and staff in place at both agencies. Generally, we’ve kind of got our arms around both operations well.”

Catholic Charities of the Finger Lakes, meanwhile, has had more experience and success when it comes to development, he said.

“There are going to be good opportunities for us to help each other in many ways. That’s really what’s exciting,” Deacon Dohr said.

Wayne County had been one of the counties served by Catholic Charities of the Finger Lakes until the Wayne County agency was formed in June 2004. It’s unclear exactly how closely the two agencies will work together going forward and whether any consolidation will take place, Deacon Dohr said.

“I think both groups and I and the diocesan leadership are approaching it from the standpoint of, as we become better educated about what’s going on in both places, there are probably some things that we can do better together, and there are some things that can continue to do better running in parallel,” he said. “It’s not really a model of diminishment. It’s really a model of expansion. It’s a very exciting time for it.”