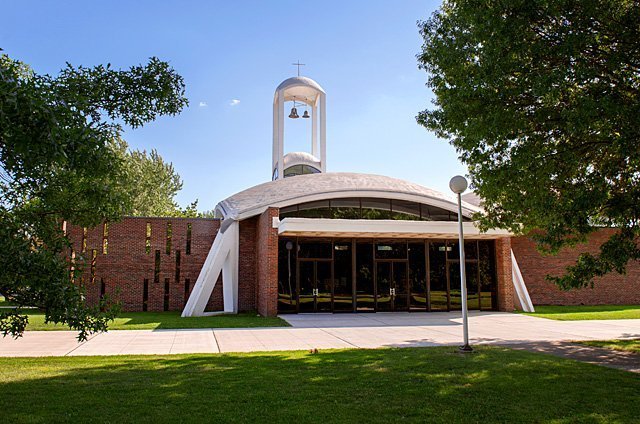 Parishioners learned of the changes in a June 23 letter and decree from Bishop Salvatore R. Matano that was read from the pulpit during weekend Masses June 28-29.

For the time being, Holy Name of Jesus Church will remain open for weddings, funerals and other occasional Masses. Father John Firpo, pastor of St. Charles Borromeo and Holy Name of Jesus, said a final regularly scheduled Mass will be planned, but the date and other plans have not yet been made.

"That will need to be discussed with lay leadership to find out what would be most appropriate," Father Firpo told the Catholic Courier June 30.

The reasons for the merger, according to the decree, "include the desire to maintain parochial ministry in the area, a lack of available clergy to provide the necessary services to distinct parishes, the financial burden associated with the multiplication of parishes and the diminishing number of people to be served in the immediate area."

Father Firpo noted that although Holy Name of Jesus was able to reduce its debt in recent years, other factors considered in the decision included Mass attendance, the proximity of the two parishes — which are about a mile away from each other — and priest availability in the diocese.

"The recommendation was that we have a better chance of preserving the ministry of the two parishes if we work together," he said.

He said St. Charles should have the capacity to accommodate all of Holy Name of Jesus’ parishioners. The merged parish will retain the patronage of St. Charles, he said.

Father Firpo said he is beginning the process of gathering together people to start planning for the future use of buildings on the Holy Name of Jesus campus, though the church will remain untouched for now so that it is available for funerals, weddings and other occasional Masses.

"The suitable use, maintenance and security of the parish buildings on St. Martin’s Way will need very careful and sensitive consideration," Bishop Matano wrote in the letter. "I encourage you to seek appropriate membership from among the parishioners of the former Holy Name of Jesus Parish to take an active part in the consultative bodies of the parish as these plans are developed."

Bishop Matano in his letter encouraged the merged parish to find ways to come together.

"I encourage you first to welcome warmly your new parishioners and to assist them in finding an appropriate way to honor the memory of their life together," he said.

In 2007, Holy Name of Jesus was $180,000 in debt and was in danger of closing, but parishioners became very active in raising funds and cutting costs. In 2009, the East Greece/Charlotte Pastoral Planning Group financial committee called for the parish to close, but in light of improvement in the parish’s finances, a planning group steering committee instead recommended leaving the parish open, subject to a yearly review. By 2010, Holy Name of Jesus was debt free.

In June 2013, Father Firpo began serving as temporary parochial administrator of Holy Name of Jesus in addition to his duties as St. Charles’ pastor; he became Holy Name’s pastor in March. Father Edison Tayag was appointed as full-time parochial vicar for the churches. At that time, Mass times were adjusted at both parishes. During the following year, pastoral council members, the Eastern Greece/Charlotte Steering Committee and Father Firpo were tasked with planning for the parishes for June 2014 and beyond.

"It was a year of listening, questioning, discussing and praying to move us to this point," Father Firpo said, noting that the parish and finance councils of both parishes, the Eastern Greece Charlotte/Planning Group and parish leaders were involved in the process that resulted in the merger recommendation to Bishop Matano.