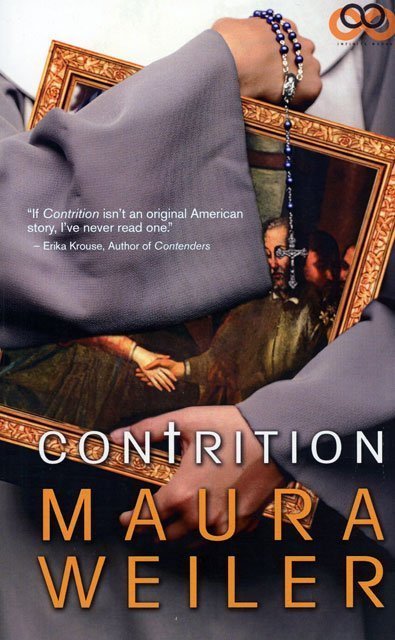 This is the cover of "Contrition" by Maura Weiler. The book is reviewed by Graham G. Yearley.
"Contrition" by Maura Weiler. Infinite Words (New York, 2015). 331 pp., $15.
"The Fifth Gospel" by Ian Caldwell. Simon and Schuster (New York, 2015). 431 pp., $25.99.
"Contrition" and "The Fifth Gospel" are two recent novels that center on sibling relationships in their closeness and in their conflict. "Contrition" by Maura Weiler tells the story of Dorie McKenna, who was adopted at an early age, only to discover in adulthood that her biological father was a famous painter and that she has a twin sister, who is a nun in a cloistered order.
Eager to know more about her sister, Dorie goes to the convent, which happens to sit on the edge of the spectacular Big Sur section of the Californian coastline. Dorie discovers her sister has inherited her father’s talent and has become an even better painter, focusing, of course, on religious subjects.
However, Dorie’s twin, Sister Catherine, has no desire to show her work beyond the convent or to form a relationship with her twin. Moreover, Sister Catherine has taken a voluntary vow of silence, creating an even greater obstacle to knowing Dorie. But, in time, they do form a relationship and that results in some dramatic changes in both sisters’ lives.
While the plot of "Contrition" may seem a bit contrived and some of the characters flat and undeveloped, it remains a hugely readable novel, one that kept this reader captive for three days.` 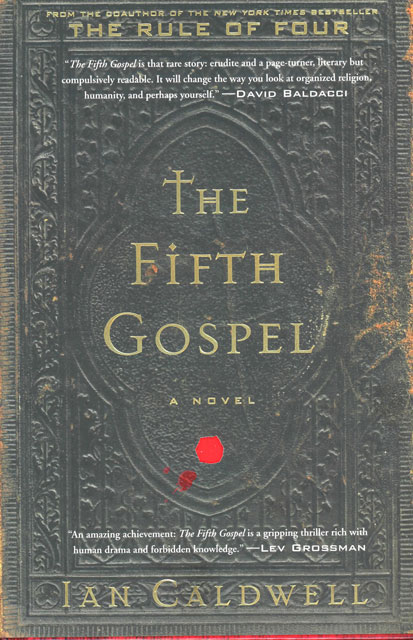 This is the cover of "The Fifth Gospel" by Ian Caldwell. The book is reviewed by Graham G. Yearley.

Ian Caldwell, author of "The Fifth Gospel" — like Donna Tartt, author of "The Secret History" — writes engrossing fiction, but not speedily. Caldwell’s last novel, "The Rule of Four," which he co-wrote with Dustin Thomason, was published in 2004 to great success. Caldwell says the research for "The Fifth Gospel" was extensive and there were several substantial rewrites that, in the end, occupied 11 years.
The research is evident; 95 percent of the action of "The Fifth Gospel" takes place within the walls of Vatican City, a small town that in addition to St. Peter’s Basilica and the Vatican Museums includes its own medical dispensary, a grocery store, a garage and apartment complexes the public never sees, but that serves as a hometown to many.
Two of its lifelong citizens are brothers, one a Latin-rite Catholic priest and the other an Eastern-rite Catholic priest, Father Simon Andreou and Father Alex Andreou. Father Alex, the narrator of the story, is from the Eastern Catholic Church, which allows the ordination of married men to the priesthood. He has a son, Peter, on whom he dotes, but he is estranged from his wife, Mona, who abandoned both husband and son.
The story begins with the murder of Ugo Nogara, the chief curator of a major exhibition at the Vatican Museums that is about to open. Father Simon has worked with Nogara on the exhibition and quickly becomes the chief suspect in his murder. Father Alex initiates a personal investigation into the murder with the hope of exonerating his brother.
Naturally, there are plenty of obstacles to learning the truth. The exhibition focuses on the legendary Shroud of Turin, the cloth that was believed to be Christ’s own burial cloth with the imprint of his body and wounds. Carbon dating of the shroud done before the time of the story proved the cloth came from a much later century.
Central to Nogara’s findings on the shroud is the text of the Diatessaron, the so-called "fifth Gospel" that blends the narratives of all four Gospels in an attempt to make a coherent narrative out of the stories of Jesus’ life and eliminate the contradictions between Matthew, Mark, Luke and John. History has proved this to be impossible and, ultimately, unnecessary.
The blending of real relics and real ancient books with both real and fictional characters makes for exciting, historical fiction. St. John Paul II is a character in the novel. But the novel’s true power springs not from the solving of the whodunit, but from a secondary plot that imagines a reconciliation between the Catholic Church and the Orthodox Church. A scene in the Sistine Chapel that brings together St. John Paul II and the patriarchs of the Orthodox Church is the most deeply moving moment in "The Fifth Gospel" and it is truly the novel’s climax.
The solving of the murder mystery seems just a sideshow afterward and a confusing sideshow at that. But a chance to explore a hidden world within one of the world’s most public places is not to be missed and Ian Caldwell is an excellent guide.
– – –
Yearley earned a master’s in theology and a certificate of advanced study from the Ecumenical Institute at St. Mary’s Seminary and University in Baltimore.
Copyright © 2022 Catholic Courier, Inc. All rights reserved. Linking is encouraged, but republishing or redistributing, including by framing or similar means, without the publisher's prior written permission is prohibited.