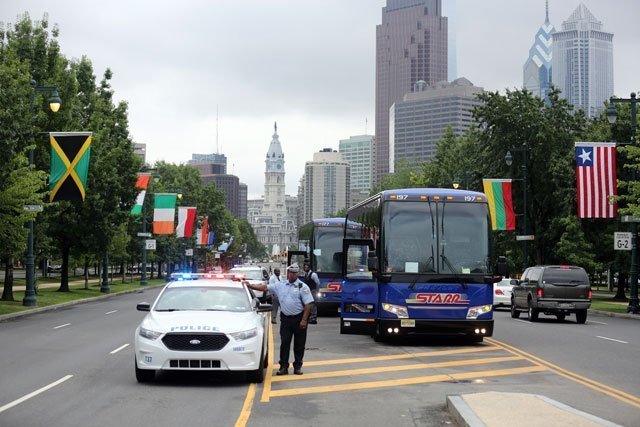 Members of the media gather along Benjamin Franklin Parkway in Philadelphia during a July 9 preview tour for Pope Francis' trip to the U.S. in September.
By Matt Gambino
Catholic News Service
PHILADELPHIA (CNS) — If you were on the proverbial fence about joining the hundreds of thousands of people in Philadelphia during Pope Francis’ visit to the city, the invitation just got sweeter.
Two papal parades will allow virtually every onlooker a glimpse of the pope as he passes by along the Benjamin Franklin Parkway, site of the Festival of Families Sept. 26 and the papal Mass Sept. 27.
In addition, 30,000 tickets were being made available to people throughout the Philadelphia region and beyond who wish to get good lines of sight on the parkway for the historic events.
Those two new developments emerged in a news conference with Donna Crilley Farrell, executive director of the World Meeting of Families, Sept. 3 at the Archdiocesan Pastoral Center in Philadelphia.
Farrell fielded questions from local media for an hour, reflecting a growing chorus of concerns by residents and visitors over difficulty accessing the papal events. The new initiatives, long in the planning but just announced, may help alleviate the fears that potential participants may have over transportation, security and access to events.
A sticking point for many was the introduction of tickets for parkway events that had previously been touted as unticketed.
"We hear what their concerns are, but it’s going to be OK," Farrell said. "We’re sorry people were concerned. We totally get it — everybody wants to see the pope."
The addition of 10,000 tickets for the Festival of Families, 10,000 for the papal Mass and 10,000 for the pope’s address at Independence Hall on Saturday should help broaden access for people who want to witness the papal events in person, Farrell added.
Tickets to the Independence Hall address became available online only at www.worldmeeting2015.org beginning at noon Sept. 8, on a first-come, first-served basis. Within two minutes they were all gone, and according to the Philadelphia Archdiocese, 394,000 visitors had come to the website in just that period of time.
The 10,000 tickets to the Sept. 26 and 27 events on the parkway were made available starting at noon Sept. 9.
The motorcade by Pope Francis the afternoon of Sept. 26 will take him from Eakins Oval in front of the Philadelphia Museum of Art down the parkway from 24th Street all the way to City Hall at Broad and Market streets, then back again.
The roughly two-mile course each way will enable people within the secure zone along the parkway and those beyond it nearer City Hall to see the pope before the start of the 5 p.m. Festival of Families, a cultural and musical celebration that will include an address by the pope.
The following day, he will embark on another parade on the parkway, but this one on a shorter route to ensure the 4 p.m. Mass at Eakins Oval begins on time.
While officials did not confirm Pope Francis would travel in the popemobile, he had done so to greet crowds as recently as his July visit to Ecuador. In that visit, he used a converted Jeep Wrangler, painted white of course. The Vatican confirmed several popemobiles had already been shipped to the United States.
Once the pope settles into the staging area at Eakins Oval, people in much of center city and particularly the Francis Festival zone will be able to watch all the events on large, elevated Jumbotron TV screens at 40 locations.
On both days before he arrives, people will have preceded him by many hours. Those with tickets will have passed through checkpoints at several locations to enter the secure zone.
A number of personal items will not be allowed into that zone, among them bicycles, hard-surface coolers, balloons and backpacks larger than 18-by-13-by-7 inches.
Some questions remained, such as bicycle access as a transportation alternative, whether parking may become available for those who attempt to drive and the locations for distribution of Communion during the papal Mass. But as the events drew nearer, their details were beginning to catch up with the excitement that has been building among people for most of the past year.
Whatever the number of attendees is tallied after the pope returns to Rome, residents will reflect for years on what Farrell predicted would be "a transformational experience for the city of Philadelphia."
– – –
Gambino is director and general manager of CatholicPhilly.com, the news website of the Philadelphia Archdiocese.
Copyright © 2023 Catholic News Service, Inc. All rights reserved. Linking is encouraged, but republishing or redistributing, including by framing or similar means, without the publisher's prior written permission is prohibited.