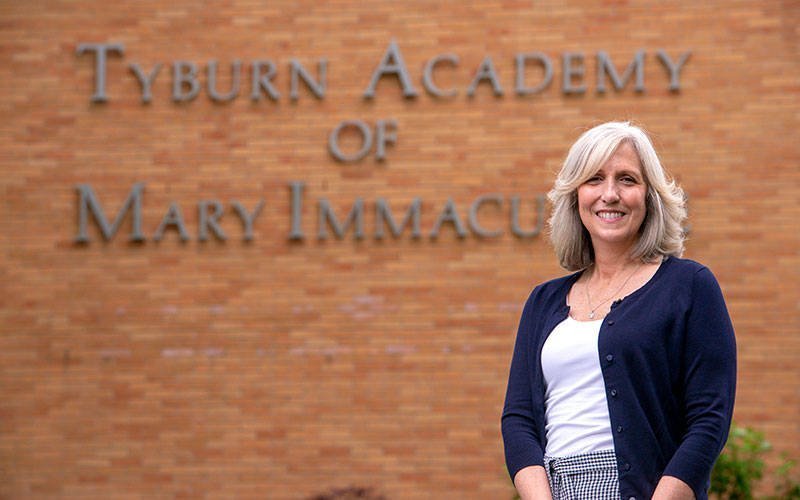 Maura DelFavero was teaching eighth-graders at the former St. Joseph School in Auburn when she happened to meet the principal of Tyburn Academy of Mary Immaculate, also in Auburn.

Jeanne Hogan, principal of the Catholic high school, came to St. Joseph’s to watch her grandchild — one of DelFavero’s eighth-graders — give a presentation, and the two educators soon became friends.

“She kept encouraging me to come to Tyburn. When she first encouraged me, it wasn’t really time for me, as far as my family was concerned,” recalled DelFavero, who at the time had young children.

In 2008, however, DelFavero agreed to come to Tyburn to meet with Hogan and some of her teachers. She ended up taking a position as an assistant administrator, and in 2016 became principal at the school that has become one of her favorite places to be.

“It kind of just always feels like home, being at the school, but I’m ready to make a change,” DelFavero told the Catholic Courier in late June.

DelFavero left her post as Tyburn’s principal July 1. She will spend the summer preparing for her daughter’s upcoming wedding and spending time with her children and grandchildren as she discerns her next vocation.

DelFavero, who was born and raised in Pennsylvania, said she landed in the field of education almost by accident. In college, she majored in political science and intended to attend law school after earning her bachelor’s degree. She added another major in education after a friend suggested she should have a backup plan in case law school didn’t work out. As luck would have it, she never went to law school after all.

“I was just lucky enough that as soon as I graduated, I got a job teaching summer school fresh out of college,” DelFavero said.

That summer job eventually turned into a full-time teaching position at a public school in Pennsylvania, where she later earned tenure.

“But then I married an Auburnian, so that brought me to Auburn,” she remarked.

After taking several years to stay home with her children when they were young, DelFavero took a teaching job at St. Joseph when her youngest started first grade at the Auburn school. She stayed at St. Joseph for four years before looking into the possibility of moving over to Tyburn Academy.

“When I first came to the building to meet with (Hogan) and some of the other teachers, it was just such a positive environment. They really didn’t have to sell me on this school,” she recalled.

DelFavero believes the positive vibe at Tyburn was due in part to the dedication of Hogan, who had been associated with the school since its early days in the 1990s.

“Everyone always said you can’t say no to Mrs. Hogan. That’s true,” DelFavero said with a laugh. “I guess her dedication to the school was infectious. You just wanted to be a part of it because she loved this school so much.”

DelFavero joined the Tyburn community just as the school was adding middle-school grades. Some parents choose to send their children to Tyburn because they believe in the school’s strong Catholic mission, while others may not be Catholic but want their children to benefit from the increased attention from teachers that Tyburn’s small class sizes allow it to provide, she said. Regardless of why they end up at Tyburn, however, students seem to feel a sense of peace while they’re there, she added.

“I think this is kind of a safe haven for them in a lot of respects,” she said.

Tyburn also has been a safe place for DelFavero, who said she’s come to regard many of the school’s families, as well as her coworkers, as a second family of sorts.

“Since it’s a small community, you really get to know people very well. … I’ll miss the community and the family that I’ve built here,” DelFavero said.

Tyburn has been a big part of DelFavero’s life since 2008 and she will miss the school, yet she knows it’s time for a change.

“Sometimes you look for signs, and the signs were there that it was time to make a transition for me,” DelFavero said.

DelFavero’s replacement as Tyburn’s principal is Conor O’Donnell, who has taught at the school for seven years and most recently served as chair of Tyburn’s theology department, she said.