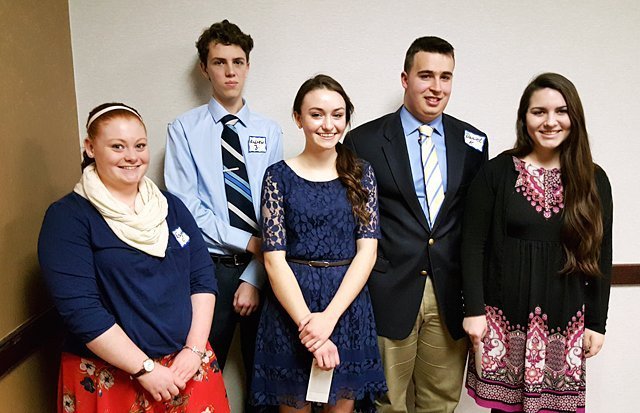 Tyburn students have been participating in the annual contest for approximately 10 years, according to Barbara Murphy, who teaches a public-speaking class at the Auburn school. Each January Murphy instructs her students to do some research on abortion, euthanasia, embryonic stem-cell research and infanticide. Each student then must choose a topic, put together a five- to seven-minute speech on his or her chosen topic, and present that speech in front of the public-speaking class. Members of the class will grade each other’s speeches on the basis of research, opening and closing statements, diction, physical presentation and interest, Murphy said.

Students are encouraged but not required to enter the oratorical contest, which this year was held March 13 at the Comfort Inn in Syracuse. Sarah said she first participated in the oratorical contest in 2014, when she was a sophomore, and she enjoyed the experience so much she’s entered every year since then.

"After the first year of competition me and my friends just decided that we’d keep going because it was a really great experience, and it was something we were passionate about," remarked Sarah, who gave a speech about abortion at the 2014 contest. "It just really touched my heart to know that so many lives are lost through abortion, and I just wanted to be a part of the pro-life movement and a part of something that could end something so terrible."

In 2015, Sarah chose to speak about infanticide, a topic she found both horrifying and moving.

"It is the murder of a child who has already taken a breath in the world, and it’s when they’re little still. It’s the killing of a baby," Sarah explained. "It really broke my heart. I wanted to make people more aware of it."

This year, Sarah decided to focus her attention on euthanasia and based her speech on the inherent dignity of every human being, regardless of age, health or ability.

"Just because you’re not what society thinks you’re supposed to be doesn’t mean you have any less dignity than anyone else," she remarked.

Sarah worked hard on her speech and was passionate about the topic, yet said she was surprised to learn the judges had awarded her first place. She will represent the Syracuse region in the state contest, which will be held May 7 at the College of St. Rose in Albany.

"It was great to see that she won. She had a really well-written speech," noted Dan, who earned second place in the Syracuse contest with a score just one point lower than Sarah’s score. Dan also had competed in the 2015 contest, and said that while his speech about euthanasia had been well-written, he had executed it poorly. This year, however, Dan was pleased with the delivery of his speech about abortion.

"This year I hit all the benchmarks I wanted to," Dan said. "I wanted to convey a really clear argument and have something people could walk away with. My three main points this year were how abortion fails to meet natural law, ethical law and constitutional law."

Dan, who said he’s always loved speaking in front of groups, said he thinks its a good idea for all Catholics — not just students — to sit down occasionally and write speeches about their beliefs. Many Catholics struggle to articulate the reasons behind the beliefs or things they know in their hearts to be true, and he enjoys participating in the oratorical contest because it helps him sort out his thoughts on pro-life topics.

"In a competition setting you’re forced to really sit down, read the Bible or read the catechism and say, ‘Why do we believe this?’ You yourself are edified and in some cases you walk away and you help the people who are listening," Dan said.

Sarah said she enjoys preparing speeches because it gives her an opportunity to fine-tune her writing, and she plans to be a writer when she gets older. She believes public-speaking experience can be beneficial to everyone, no matter what career paths they plan to pursue.

"I think it can only benefit you to put yourself out there and get outside your comfort zone and speak about something you’re passionate about," she said.