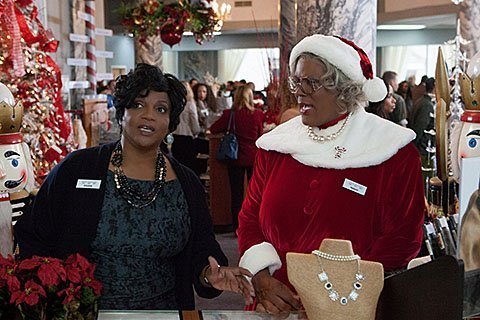 Anna Maria Horsford and Tyler Perry star in a scene from the movie "Tyler Perry's A Madea Christmas." The Catholic News Service classification is A-III -- adults. The Motion Picture Association of America rating is PG-13 -- parents strongly cautioned. Some material may be inappropriate for children under 13.

NEW YORK (CNS) — Broad-strokes comedy — much of it concerned with sex and scatology — is interspersed with a strained family drama in "Tyler Perry’s A Madea Christmas" (Lionsgate). The result for audiences is not exactly a warm yuletide glow.

In the latest in a series of screen adventures that date back to 2005’s "Diary of a Mad Black Woman," freewheeling matriarch Madea (Tyler Perry in drag, of course) travels from Atlanta to rural Alabama in the company of her uptight niece Eileen (Anna Maria Horsford) to surprise Eileen’s grown daughter Lacey (Tika Sumpter) with a holiday visit.

Lacey, however, is less than pleased to find the duo on her doorstep since she has been concealing from her overbearing mom — who would apparently be disappointed by the news — her elopement with white agriculturalist Connor (Eric Lively). To make matters worse, Connor’s kindly redneck parents Kim (Kathy Najimy) and Buddy (Larry the Cable Guy), who know all about the marriage and heartily approve of it, have been invited to spend Christmas with the newlyweds.

On the way to the big reveal in store for Eileen, Madea makes use of the farmland setting by taking a fall into manure and by stumbling into a meeting of the Ku Klux Klan — not all yokels, it seems, being as enlightened as Kim and Buddy. When Lacey, a teacher, leaves Madea temporarily in charge of her class, the kids are treated to a fractured version of the Nativity story featuring "the Virgin Mary … J. Blige."

The same sequence finds an obstreperous schoolgirl who stole Madea’s purse for a practical joke punished by mock crucifixion: Despite giving every appearance of being located in a public school, Lacey’s classroom sports a free-standing wooden cross to which Madea’s victim is bound with strings of colored lights, a holiday wreath substituting for the crown of thorns. It’s hard to know who should find this situation more troubling, believers or ardent members of the American Civil Liberties Union.

Somewhat more credible is a subplot involving a corporate sponsor’s efforts to denude the local Christmas festival of all references to Christianity. In response, the townsfolk show an admirable determination to stay focused on the reason for the season.

That interlude aside, in adapting his eponymous stage play for the screen, writer-director Perry stuffs viewers’ stockings with an excess of vulgar wisecracks.

The film contains much crude and some mildly irreverent humor, at least one use of profanity, drug references and numerous crass terms. The Catholic News Service classification is A-III — adults. The Motion Picture Association of America rating is PG-13 — parents strongly cautioned. Some material may be inappropriate for children under 13.