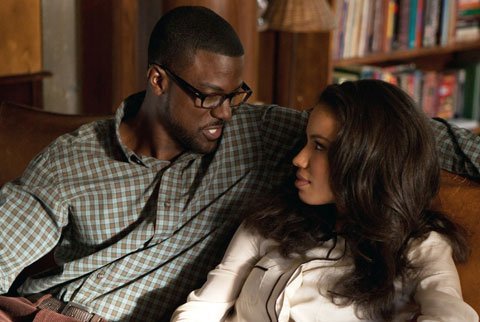 Lance Gross and Jurnee Smollett-Bell star in a scene from the movie "Tyler Perry's Temptation: Confessions of a Marriage Counselor" (CNS photo by Lionsgate).

Only Perry’s most devoted fans will likely enjoy this story of Judith (Jurnee Smollett-Bell) and her struggle — not, admittedly, an especially heroic one — with adultery.

No one actually listens to Judith. Instead, they talk at her — endlessly. As in all of Perry’s stories, however, there’s a stiff moral spine. In this instance, the ethical backbone derives from Judith’s churchgoing youth in the rural South, which was overseen by her devoted single mother Sarah (Ella Joyce), a minister.

With a master’s degree in counseling and hoping to launch her own marriage-counseling firm, Judith is married to her childhood sweetheart, stalwart but dull Brice (Lance Gross). They live in Washington, where Brice is a pharmacist at a small independent drugstore; Judith is stuck working for a high-end dating service for wealthy men.

Judith is ordered by boss Janice (Vanessa Williams) to cultivate Harley (Robbie Jones), a high-tech multimillionaire Janice hopes will invest in the firm. Harley is unhappy because he says it’s tough “to be able to buy whatever you want, and beg for what you need.”

He’s fascinated that Judith has only ever had one man in her life, and begins a simmering flirtation as they develop a computer program to determine compatibility. He even grills her about her marriage: “Does he challenge you mentally? Does he bring out the best in you?”

When Janice orders Judith to accompany Harley on a business trip to New Orleans — well, there you go. Judith takes on an entirely new personality as a sultry, well-dressed, wine-swilling — and brazen — adulteress.

It’s time for the Rev. Sarah to reappear, lecturing all in her path, including Brice. There’s the predictable bickering, and when she learns that Brice has faltered in attending worship services, Sarah proclaims, “You need yo’ (behind) whipped with the King James Version!”

Moral bearings are righted, as is the pattern in Perry’s films, after considerable emotional pain. But it’s mostly just talk, talk, talk — slow moving, and not in the least compelling.

The film contains an adultery theme with two nongraphic adulterous encounters, drug use, sexual banter and fleeting crass language. The Catholic News Service classification is A-III — adults. The Motion Picture Association of America rating is PG-13 — parents strongly cautioned. Some material may be inappropriate for children under 13.