Tyler Perry's Why Did I Get Married Too? - Catholic Courier 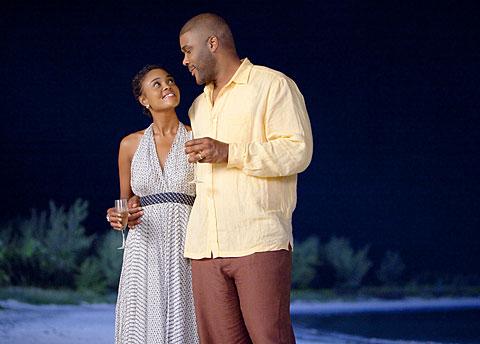 NEW YORK (CNS) — Fans of the prolific — and often predictable — Tyler Perry will find themselves on familiar terrain with his ninth film project in five years, the sequel "Tyler Perry’s Why Did I Get Married Too?" (Lionsgate). Though dramatically uneven — with some scenes working quite effectively while a few go embarrassingly astray — this mix of comedy and drama is, for the most part, a morally steady examination of the challenges and rewards of committed marital love.
?
The writer-director reunites the eight old college friends — all upwardly mobile African-Americans — whose relationships he explored in his 2007 hit "Tyler Perry’s Why Did I Get Married?" for another of their annual marriage retreats, this time in the Bahamas.
?
Providing most of the comic relief, once again, is Tasha Smith as salon owner Angela, the hyper-suspicious and ever-quarrelsome mate of ex-NFL player and current sportscaster Marcus (Michael Jai White).
?
At the other end of the emotional spectrum is Janet Jackson as Patricia, the successful self-help author whose talent at counseling others is ironically contrasted with her own excessive perfectionism and inability to express her feelings openly, traits which steadily undermine her marriage to architect Gavin (Malik Yoba).
?
The breakdown of their relationship eventually leads not only to harsh verbal exchanges but to an unsettling physical confrontation involving drunken, semi-abusive behavior by Gavin.
?
Herself a victim of both physical and emotional abuse in the past, Sheila (Jill Scott) has split with her rotten ex, Mike (Richard T. Jones), and found a supportive new spouse in Troy (Lamman Rucker). But Troy’s ongoing unemployment is putting their bond to the test, while Mike’s unwelcome appearance at the retreat — motivated, partially at least, by his remorseful desire to win Sheila back — adds a further strain.
?
Perry’s character Terry, who was feeling neglected by his work-obsessed lawyer wife, Dianne (Sharon Leal), at the last get-together, now has doubts about her fidelity.
?
While implicitly endorsing Sheila’s remarriage, the script is otherwise all about dedication and stability. But the highlighted values — such as open communication and self-giving love — do not rest on a spiritual foundation and, unlike some of Perry’s other offerings, faith has no explicit influence on the characters’ lives.
?
The mention of one wife’s past decision to have her "tubes tied" will strike Catholic viewers as another flaw in the fabric of what is, overall, an ethically sound — though occasionally cliched — survey of married life.
?
The film contains brief, nongraphic marital lovemaking, a nonmarital bedroom scene, intense domestic discord, adultery theme, numerous sexual references, including mention of sterilization and venereal disease, drug references and frequent crass language. The USCCB Office for Film & Broadcasting classification is A-III — adults. The Motion Picture Association of America rating is PG-13 — parents strongly cautioned. Some material may be inappropriate for children under 13.
?
– – –
?
Mulderig is on the staff of the Office for Film & Broadcasting of the U.S. Conference of Catholic Bishops. More reviews are available online at www.usccb.org/movies.