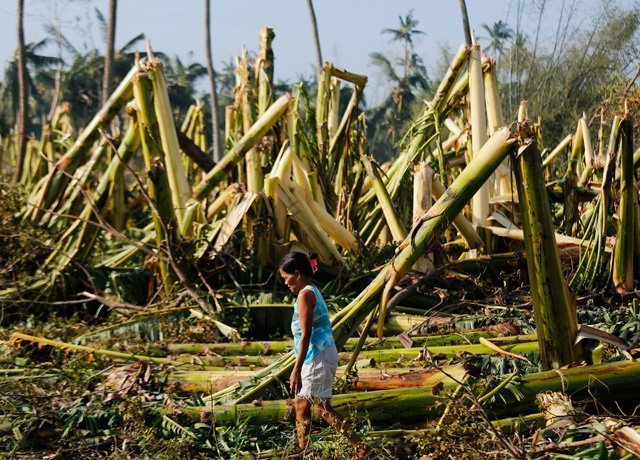 An elderly woman walks next to a damaged banana plantation Dec. 27 after a typhoon hit the town of Anayan, Philippines. Typhoon Nock-Ten packed 115-mph winds that downed power lines, uprooted trees and knocked out communications infrastructure while making travel difficult.

MANILA, Philippines (CNS) — The emergency response to a major typhoon that hit the northern Philippines Christmas Day and killed at least six people was slowed because some government and aid workers were on holiday leave, a Catholic Relief Services official said.

Matthew McGarry, sub-regional country representative in the Philippines for the Baltimore-based agency, said it can be “extremely difficult” to get information on damage and injuries during the first three days after a storm hits.

McGarry told Catholic News Service the island province of Catanduanes in the east, which took the first hit from the powerful storm, is virtually cut off because no flights or boats can get in. He said in some places only aerial assessments were made.

He said, “It’s not unusual to respond to an emergency in the Philippines in December … but Dec. 25 is abnormally late in December for a major typhoon like this. … So it’s easier to have people work through a holiday, rather than try to bring them in in the midst of a holiday.”

CRS recalled its emergency team from holiday break to start assessments Dec. 27, McGarry said. The agency was expected to focus on shelter, water and livelihood work once a full assessment was carried out.

On Christmas officials said more than 12,000 ferry passengers were stranded as a no-sail order was issued and more than 330 domestic and international flights at Manila’s international airport were canceled Dec. 26 as the storm made its way off the country’s western seaboard.

The civil defense office said about 430,000 people were evacuated from their homes. A day before the storm, government officials had been trying to move residents to safety, with reports of people not wanting to interrupt their Christmas celebrations to leave home.

The governor of Camarines Sur province reportedly offered roasted pig, a holiday staple, to residents to entice them into shelters. The vice governor of Catanduanes told a local television network that her office ordered forced evacuations, calling residents “hard-headed” as they refused to leave because it was Christmas. But McGarry said, from initial reports, the government appeared to have carried out a successful mass evacuation.

Meanwhile, the Philippines coast guard resumed its search Dec. 27 for 18 crewmen from a cargo ship that sank at the height of the storm. A coast guard official said 14 other crewmen had been rescued and another died after the M/V Starlite Atlantic sank off Batangas province as the storm swept out of the country and into the South China Sea Dec. 26.