U.N. agencies: One in 10 Ukrainians is a refugee - Catholic Courier 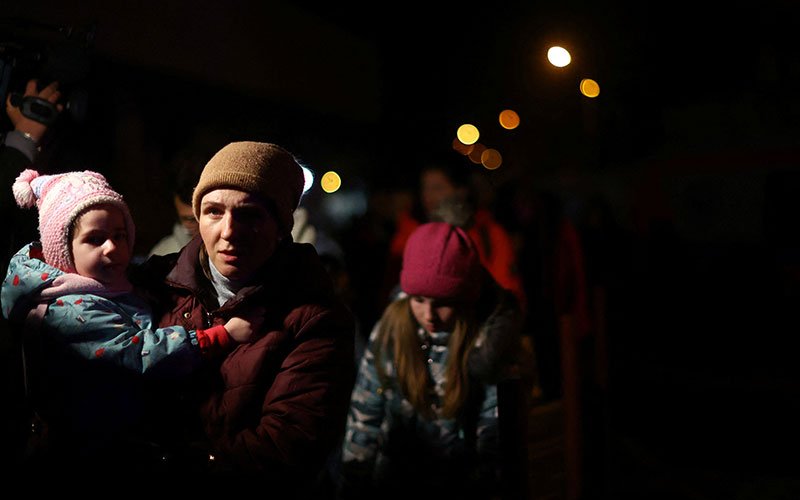 Ukrainian refugees who fled the Russian invasion wait to board a train to be able to return to Ukraine outside the train station in Przemysl, Poland, March 29, 2022. The U.N. refugee agency announced that the number of refugees fleeing Ukraine since Feb. 24 has surpassed 4 million people. (CNS photo by Hannah McKay/Reuters)

ROME (CNS) — More than 4 million people have fled Ukraine in the past five weeks, and half of them are children, said two U.N. agencies.

“Children make up half of all refugees from the war in Ukraine,” UNICEF said March 30 in a media release that included data from UNHCR, the U.N. refugee agency.

The UNHCR reported March 23 that 6.5 million people have been displaced internally within Ukraine and over 12 million more have been affected in the areas hardest hit by the war. “Humanitarian needs are increasing exponentially,” it said.

With the latest figures, nearly 10% of the 44 million people who lived in Ukraine before the conflict have become refugees, according to the UNHCR estimates as of March 30. Those figures could be higher, it added.

“The situation inside Ukraine is spiraling,” said Catherine Russell, executive director of UNICEF.

“As the number of children fleeing their homes continues to climb, we must remember that every single one of them needs protection, education, safety and support,” she said in a March 30 statement.

Poland has taken in the majority of refugees — 2.3 million, according to the U.N., and more than 1.1 million of them are children, with hundreds of thousands also arriving in Romania, Moldova, Hungary, Slovakia and the Czech Republic, it said.

Rafal Trzaskowski, mayor of Warsaw, has appealed for help from other nations. There are some 300,000 refugees just in the capital, which is struggling to provide needed services, he said.

Meanwhile, Italians in the northern Lombardy region, with the help of a major trade fair management company in Milan, have sent seven tractor-trailers loaded with the first of a total of 100 tons of food and supplies to the Ptak Warsaw Expo center, LombardiaNotizie.online said March 30.

The expo center is the largest congress center in Central and Eastern Europe, and it has been repurposed into a humanitarian aid shelter for refugees. Up to 10,000 people a day come through the center on their way to other destinations in Europe, the news outlet said.

A “peace caravan” of about 60 trucks, minivans and other vehicles left Italy March 31 to arrive in Lviv, Ukraine, which has also been the target of Russian missile strikes.

In addition to bringing 1 million euros worth of emergency supplies, drivers will also be transporting back to Italy about 300 vulnerable people, including children in need of urgent medical attention, according to Avvenire, the daily newspaper of the Italian bishops’ conference.

There will be a peace march through the city center and an ecumenical prayer service April 2, it said.

The initiative was organized by the Pope John XXIII Community, founded by the late Father Oreste Benzi, and was part of its “Stop the war now” appeal, the newspaper said March 30.

Nearly 200 people are expected to arrive in Lviv. Among them will be Archbishop Giuseppe Satriano of Bari-Bitonto, who will carry a message on behalf of the Italian bishops’ conference, and representatives of Pax Christi, the Focolare movement, the Comboni Missionaries and many other groups promoting nonviolence and rights’ protections.

The “peace caravan” comes under an umbrella of similar initiatives launched by Father Benzi in 1992, called “Operation Dove of Peace,” which saw 500 members of the community and Italian conscientious objectors march to Sarajevo, Bosnia-Herzegovina, which was then under siege. “Operation Dove of Peace” continued over the decades with activists arriving in other cities caught up in deadly conflicts around the world to offer aid, support and solidarity.

“We want to show the other side of Europe, the part that does not believe in sending arms and weapons of war, but wants to bring another kind of help,” said Gianpiero Cofano, general secretary of the Pope John XXIII Community.

“We are also thinking of organizing a small delegation that will head to Moscow to show our closeness to Russian civilians who are against this war,” he told Avvenire.

Despite the dangers and risks of speaking out against the war, more than 1.5 million Russian civilians signed a change.org petition in early March, calling for an end to the war with Ukraine. “We demand an immediate cease-fire by the Russian armed forces and their immediate withdrawal from the territory of the sovereign state of Ukraine,” said the petition.

Other open letters and petitions protesting the war were launched by different professional communities, gathering the following numbers of Russian signatories: some 30,000 information technology experts, actors and other professionals; nearly 15,000 doctors, nurses and paramedics; some 10,000 students, university professors and journalists; and nearly 8,000 Russian scientists, including the 2010 Nobel Prize winner in physics, Konstantin Novoselov.