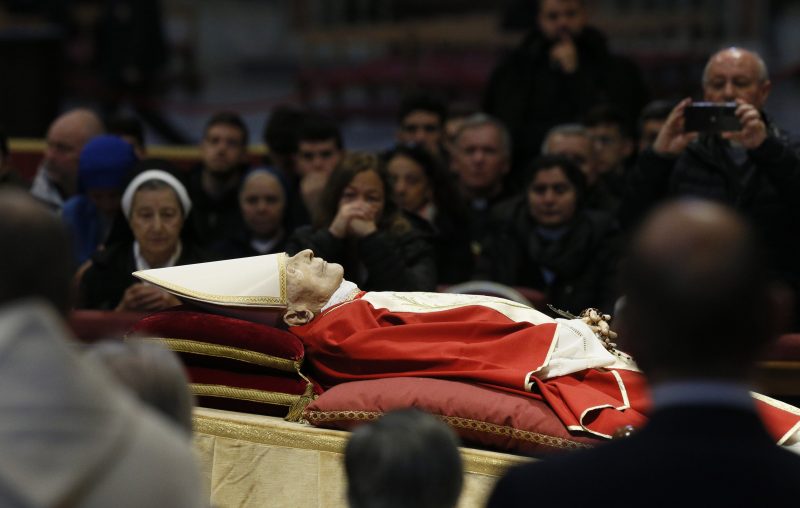 People pay their respects at the body of Pope Benedict XVI in St. Peter's Basilica at the Vatican Jan. 3, 2023. (CNS photo by Paul Haring)

WASHINGTON (OSV News) — Across the U.S., Catholic bishops called on the faithful to unite in mourning for retired Pope Benedict XVI, who died on the eve of the new year.

“While we grieve that he is no longer with us here, I join Catholics everywhere in offering my profound gratitude to the Lord for the gift of Pope Benedict XVI and his ministry,” said Archbishop Timothy P. Broglio, president of the U.S. Conference of Catholic Bishops. “Together we beg our Lord to grant him eternal rest.”

Benedict XVI (1927-2022) passed away Dec. 31 at 95 years old, nearly a decade after resigning the papacy — an event not seen in 600 years. He led the Catholic Church as pope from 2005-2013, previously served under St. John Paul II for more than 20 years as head of the Congregation for the Doctrine of the Faith, and was one of the last living participants at the Second Vatican Council.

Pope Benedict remembered as a teacher and theologian

Archbishop Broglio, who also heads the U.S. Archdiocese for the Military Services, said Benedict’s passing “sounds contrasting notes of sorrow and gratitude in my heart.” The Dec. 31 statement noted the late retired pope was “a superb theologian” and “effective teacher of the faith” who left a wealth of learning for the whole Church.

“As a priest, university professor and theologian, archbishop and cardinal, his voice in deepening an authentic understanding led all of us to a more profound love of truth and the mystery of God,” he said.

The USCCB president also praised Pope Benedict or his decision to retire from the papacy in 2013 — a move that “shocked the world” but “continued his teaching about courage, humility and love for the Church.”

Even in retirement, he said, Pope Benedict “continued to teach us how to be a true disciple of Christ, while still contributing to his legacy.”

From coast-to-coast, tributes to Pope Benedict from U.S. Catholic bishops kept pouring in, reflecting on his legacy, virtues, and his love of Christ.

“His long life included not only his ecclesial contributions, but his impassioned pleas for world peace, human understanding, and global solidarity,” Cardinal Wilton D. Gregory of Washington, said in a statement praising Benedict’s distinguished and generous life in service to Catholicism and humanity.”

Cardinal Seán P. O’Malley of Boston, whom Pope Benedict made a cardinal in 2006, and president of the Pontifical Commission for the Protection of Minors since its establishment in 2014, said in a statement that he always found the late pope to be “an engaged leader, thoughtful in his decisions and always committed to the mission of the Church.”

Cardinal O’Malley recalled Pope Benedict’s “deep pastoral care for the survivors” when the cardinal accompanied survivors of clergy sexual abuse to a meeting with the pope in Washington during the pontiff’s 2008 pastoral visit to the United States. He said it was “perhaps the most moving experience for me.”

The pope “recognized the pain experienced by survivors and all persons impacted by the abuse crisis,” Cardinal O’Malley said. “He was then, and at all times remained, committed to the Church supporting their journey toward healing and doing all that was possible to ensure the protection of children, young people and vulnerable adults.”

Bishop J. Mark Spalding of Nashville, Tennessee, noted Pope Benedict was “well prepared to serve when elected to lead the Church as successor to St. John Paul II,” and that his “strength and compassion … carried the world through periods of moral, political, and societal challenges on the firm footing of the depth and breadth of Catholic teaching.”

Bishop Michael F. Burbidge of Arlington, Virginia, called on his diocese to both “unite in prayer” for the retired pope as they mourn and also give thanks to God for Pope Benedict’s “example and witness.”

“A devoted student of the Word of God and steeped in the Church’s liturgical and theological tradition, he was able to engage the modern world with intellectual clarity and pastoral charity,” Bishop Burbidge said.

As a scholar and churchman his whole life, Pope Benedict “showed us what it means to fulfill the ancient command to love God with all your heart, with all your soul and with all your mind,” said Cardinal Blase J. Cupich of Chicago.

“As the last pope who attended the Second Vatican Council, he has served as a bridge to the future, reminding us all that the reform and renewal of the church is ongoing,” the cardinal said in a Dec. 31 statement.

Cardinal Daniel N. DiNardo of Galveston-Houston also noted Pope Benedict’s “firsthand” knowledge of Vatican II’s teaching, and said his scholarly work will shape the church for years to come. His statement said the former pope’s “keen intellect invigorated the New Evangelization by drawing hearts and minds into the mystery of our redemption in Christ, and inspiring countless men and women to spread the Gospel by the example of their lives.”

Pope Benedict was a ‘wise and holy man’

In a tweet posted shortly after the retired pope’s death, Cardinal Joseph W. Tobin of Newark, New Jersey, shared a prayer for him: “May the Angels lead you into paradise; may the martyrs greet you at your arrival and lead you into the holy city, Jerusalem. May the choir of Angels greet you and like Lazarus, who once was poor, may you have eternal rest (In Paradism). May he rest in the peace of Christ.”

“The human family grieves the passing of this erudite, wise and holy man, who spoke the truth with love,” New York Cardinal Timothy M. Dolan said in a Dec. 31 statement. “I personally sense the loss as he was so encouraging, and appointed me archbishop of New York (2009) and nominated me a cardinal (2012).”

Cardinal Dolan said the New York Archdiocese “remembers with love” the pope’s pastoral visit there in 2008. The visit included an address to the United Nations; Mass at Yankee Stadium; prayers at Ground Zero, the site of the former World Trade Center’s twin towers, brought down by the 9/11 terrorist attack; and a historic visit to a U.S. synagogue.

Archbishop Salvatore J. Cordileone of San Francisco said Pope Benedict’s passing
“marks the loss of one of the world’s greatest theologians and pastors of souls of the 20th and early 21st centuries.”

“Many generations to come will benefit from the breadth and depth of his understanding of our faith tradition and ability to communicate it clearly and effectively,” he said in a statement provided to OSV News by his communications office. “For those of us who have had the great blessing of interacting with him on a personal level, we will always be inspired by his gentleness, kindness, wit and ability to listen with respect and compassion.”

Many U.S. bishops also reflected on how Pope Benedict’s intellectual contributions and humility went hand-in-hand, rooted in a life of following Jesus Christ.

Bishop Donald J. Hying of Madison, Wisconsin said one found in Pope Benedict “a remarkable convergence of the soul, intellect, heart and will of a man radically convicted of the truth of the Gospel and fully dedicated to serving the Lord Jesus Christ and His Church.”

“He knew who he was before the Lord, without pretense or artifice,” Bishop Hying said in a statement. “This humility grounded him through the trials, difficulties, and controversies of his varied and demanding life, poured out for Christ and the saving truth of our beautiful Catholic faith.”

Pope Benedict also was a “man of true humility” who radiated “quiet, authentic joy in Christ,” said Ukrainian Catholic archbishop Borys Gudziak of Philadelphia in a Facebook post written originally in Ukrainian. “In an age of flaunted raw ambition, he did not cling to power. He lived eucharistically. He witnessed a spiritual peace, a focus on the Lord, a profound goodness, forged by the capacity to say ‘I am sorry.'”

Cardinal Robert W. McElroy of San Diego also reflected on Pope Benedict XVI’s death with “sadness and gratitude,” saying he served God “with sacrifice and courage, brilliance and wisdom, humility and kindness for his entire life.”

“He was a theologian of immense depth, a caring pastor and a prayerful servant who unswervingly sought to follow the pathway to which God was calling him,” Cardinal McElroy said.

“In loving Jesus Christ he brought grace to the Church and ennobled or world.”

In Minnesota, Archbishop Bernard A. Hebda of St. Paul and Minneapolis recalled being in St. Peter’s Square the evening of Pope Benedict’s election to the papacy.

“I recall his amazement that the cardinals gathered in conclave had chosen to elect a ‘humble worker in the vineyard of the Lord,’” he said in a Dec. 31 statement. “I had already personally experienced his exceptional kindness and had long admired his world-class intellect, but my love and respect for him grew as the world came to know him as a humble and selfless shepherd, with a unique gift for proclaiming the truth with love. It was only my confidence in his discernment that led me to say ‘yes’ when I was named by him in 2009 to serve as a diocesan bishop. I will always be grateful for his magnanimity and example.”

Bishop David M. O’Connell of Trenton, New Jersey, reflected Dec. 31 on his personal encounters with Pope Benedict, including the pope’s visit in 2008 to The Catholic University of America in Washington, D.C., during Bishop O’Connell’s tenure as president. Two years later, Pope Benedict named him coadjutor bishop of Trenton, and in 2011, Bishop O’Connell traveled to the Vatican with other New Jersey and Pennsylvania bishops for an ad limina visit with Pope Benedict, where he said the pope fondly recalled his visit to CUA.

“Pope Benedict spent his entire life in various roles of service to the Catholic Church,” he said. “He will be well remembered for many accomplishments and, no doubt, criticized for others. To the end, Pope Benedict XVI remained a faithful, long-suffering yet joyful witness to the Lord Jesus Christ. May he rest now in the eternal peace of the Lord he served so well and loved so very much.”

Tags: Pope Benedict XVI, USCCB
Copyright © 2023 OSV News / Our Sunday Visitor, Inc. All rights reserved. Linking is encouraged, but republishing or redistributing, including by framing or similar means, without the publisher's prior written permission is prohibited.