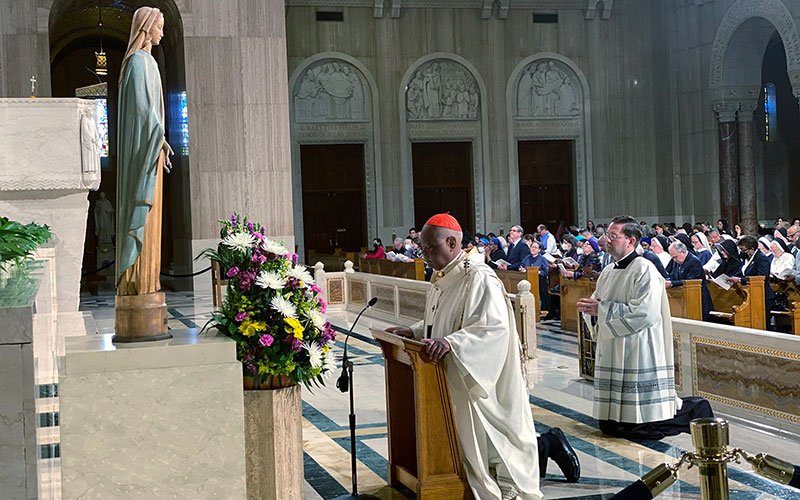 Washington Cardinal Wilton D. Gregory prays before a statue of Mary March 25, 2022, at the Basilica of the Immaculate Conception in Washington after pronouncing the Act of Consecration to the Immaculate Heart of Mary for Ukraine and Russia, entrusting them to Mary. (CNS photo by Rhina Guidos)

WASHINGTON (CNS) — Bishops in the U.S. took part in Pope Francis’ invitation to join him in a moment of prayer, consecrating Russia and Ukraine to the Immaculate Heart of Mary March 25, entrusting the people of both countries to the care and protection of the Blessed Virgin Mary.

“Friends, we are all deeply disturbed by the war in Ukraine, and the unconscionable attacks on innocent men, women, and children in their homes and neighborhoods,” said Los Angeles Archbishop José H. Gomez, president of the U.S. Conference of Catholic Bishops, in a video message.

“In this time when our world is weighed down under the shadow of war, I invite you to enter into this solemn moment of prayer with the Holy Father,” the archbishop said. “Together with him, let us ask our Blessed Mother to turn her eyes of mercy toward all her children. Let us ask her to intercede with her son, to deliver her children from evil and grant us peace.”

What is a consecration?

Father John Broussard, of the Fathers of Mercy and rector of the National Shrine of Our Lady of Good Help in Wisconsin, explained what consecration means in a March 18 statement.

“To consecrate something is the act of setting it apart for our Lord and, furthermore, to consecrate it to our Blessed Mother is to deliberately put that intention into her hands,” he said.

Some bishops celebrated a Mass with their parish or school community with the intention of praying for peace with a particular focus on the people of Ukraine and Russia.

The Archdiocese of Los Angeles suggested that parishes ring their bells “29 times to mark the 29 days since the invasion of Ukraine began on Feb. 24, 2022.”

The March 25 prayer of consecration took place on the feast of the Annunciation of the Lord, when tradition says, the Angel Gabriel visited Mary to tell her she would be the mother of Christ.

The example of Mary

And she’s the one Pope Francis has offered as an example to deal with the tribulation of war, with uncertainty and darkness, said Cardinal Wilton D. Gregory of Washington during a homily at the Basilica of the National Shrine of the Immaculate Conception, where he lead the faithful in the prayer of consecration.

“We come together today in one of the darker moments in human history. We can literally see the war being conducted via our smartphones,” he said, watching the path of rockets resulting in the death of defenseless children and the elderly and worrying about the threat of nuclear war.

But in the midst of that, “it is better to welcome a glimmer of light from Christ, our light, than to turn to darkness,” he said to a crowd that included about 40 members of various diplomatic missions to the U.S.

He praised Pope Francis for his efforts, including for breaking with protocol and directly walking into the Russian Embassy to the Holy See to express his concern a day after the attacks against Ukraine began Feb. 24.

“He has shown us how important it is to put our words into action,” he said. “We come here this afternoon at the encouragement of Pope Francis.”

Like other prelates around the world, he recited the act of consecration for close to nine minutes and then remained kneeled for several minutes before a statue of Mary as a choir sang.

Hundreds of the faithful filled Philadelphia’s Cathedral Basilica of SS. Peter and Paul for the act of consecration, led by Philadelphia Archbishop Nelson J. Pérez and Archbishop Borys Gudziak, metropolitan archbishop for Ukrainian Catholics in the U.S.

Some three dozen Catholic clergy of both the Latin rite and the Byzantine rite concelebrated Mass with the two prelates immediately following the act of consecration.

The feast of the Annunciation marks what in Byzantine tradition is known as “the day of the beginning of salvation,” when “the Son of God (became) incarnate through the Holy Spirit and the humility of his divine Mother,” said Archbishop Gudziak, who preached the homily for the liturgy.

The need for Christ’s redemption has been underscored by the suffering from the war in Ukraine, he said.

“Things are clear,” said Archbishop Gudziak, who heads the Ukrainian Catholic Archeparchy of Philadelphia. “The danger of evil, the will of the enemy of mankind, the frailty of our human nature is starkly before our eyes.”

He admitted that he himself has struggled to pray for Russian persecutors amid that nation’s brutal assaults on Ukrainians.

“I’ll be frank with you in expressing some of the concerns of the people of Ukraine. Some (ask), ‘How can you put the rapist and the one being raped in the same room?'” said Archbishop Gudziak, adding that in noting such questions, “I’m speaking about myself.”

Yet such forgiveness is “the spiritual height to which this moment calls us,” he said.

Pointing to the global outpouring of support for Ukraine, Archbishop Gudziak also said he believed “never in human history have people of goodwill around the globe been so united.”

After Communion, Archbishop Pérez thanked Archbishop Gudziak “for reminding us that the Christian heart is a heart that can find hope in the middle of despair.”

In New Jersey, at the St. Mary of the Assumption Cathedral in Trenton, Bishop David M. O’Connell began Mass with the consecration and in his homily reflected on Mary’s profound role.

“‘I am the servant of the Lord. Let it be done to me as you say.’ On this feast (of the Annunciation), we are called by her innocence, humility, courage, obedience and example to make her words our own,” Bishop O’Connell said.

He concluded, “In our troubled world at this very moment, unsettled by the outrage, carnage and destruction of the current war in Ukraine, we turn to Mary once more — as we have done so often throughout the history of the church — and place within her Immaculate Heart, in a profound act of consecration, Russia and Ukraine, as we pray for peace there.”

In the Archdiocese of St. Paul and Minneapolis, Archbishop Bernard A. Hebda told the faithful at the Cathedral of St. Paul in St. Paul that he was grateful Pope Francis had called for the Act of Consecration on the feast of the Annunciation.

It was Mary’s “yes” that brought Jesus so close to all people, taking on human flesh, and in turn brings all people closer to one another, the archbishop said. “We need that unity that Christ brings into the world through that ‘yes,’ through that ‘fiat’ of Mary.”

In Pittsburgh, Bishop David A. Zubik said in a March 24 statement that “following the lead of Pope Francis, we need to continue to pray for the end of the war on Ukraine and that world leaders may find a bridge that brings the world to global peace.”

But the war in Eastern Europe showed no sign of dissipating as of March 25. Ukraine provided a video showing a large Russian ship under attack. Despite fending off occupation, many Ukrainian cities have been nearly destroyed.

The U.N. High Commissioner for Refugees said 6.5 million people are internally displaced in Ukraine and 3.7 million have fled the country as of March 25, with most of them heading to neighboring Poland.

President Joe Biden visited some of the refugees in Poland March 25 as well as soldiers as the U.S., with NATO leaders, prepared for contingency plans in case of biological or nuclear attacks by Russia.

The Texas Catholic Conference of Bishops March 21 said they were calling, not just on Catholics, but “on all people of goodwill to pray that world leaders will find an end to the conflict and to provide solace and support to the millions of people who are now refugees.”