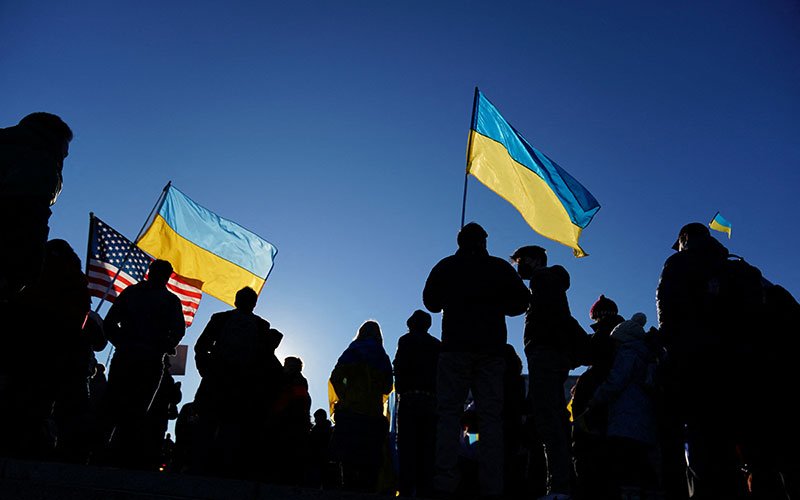 Demonstrators participate in a "Stand with Ukraine" rally at the Lincoln Memorial in Washington Feb. 20, 2022. (CNS photo by Sarah Silbiger/Reuters)

WASHINGTON (CNS) — As palm fronds burned in a crackling fire at the Franciscan Monastery of the Holy Land in Washington, Atonement Father Jim Gardiner called attention to a more sinister fire burning in another part of the world.

“There’s other types of fires in the world that are breaking our hearts right now. We see people’s homes destroyed in Ukraine and elsewhere,” he said Feb. 27 to a crowd that gathered to watch palms reduced to a fine powder for use at the monastery’s Ash Wednesday Masses this year.

A short distance from the monastery, the Basilica of the National Shrine of the Immaculate Conception, the largest Catholic church in North America, a few hours later lit up in blue and yellow, the colors of the Ukrainian flag.

Such shows of solidarity and unity among Catholics have become commonplace, even in the U.S. church, where, like the rest of country, church members are usually at odds with one another — divided along political lines about any number of issues.

But Ukraine seems to be a rare point of unity. As Russia intensified its attacks March 1, carrying out major offensives in various cities in Ukraine, many Catholics intensified their prayers.

The Sisters of Mercy of the Americas encouraged Catholics to participate in Ash Wednesday, on March 2, accompanying Pope Francis’ call: to fast and pray for peace for Ukraine.

“We deeply grieve for all those suffering from the unfolding humanitarian crisis and echo the repeated call of our church leaders that war is ‘always a defeat for humanity,'” the congregation said in a news release.

“Ukrainians will be forced to flee their homes and Ukrainians in the United States must be kept safe from being returned to harm,” CLINIC said.

At the diocesan level, bishops with significant numbers of Ukrainians in their flock organized Masses and special prayer services to comfort those worried about friends and family in their native country.

Bishop Robert J. Brennan of Brooklyn, New York, tweeted Feb. 26 about a visit with the Ukrainian community at Guardian Angel Church in Brighton Beach, saying he was “doing what Catholics do in times of tribulation: We pour our hearts out to God and ask for his protection.”

Along with Brooklyn Auxiliary Bishop Witold Mroziewski, Bishop Brennan celebrated a special Mass to pray for those people suffering in Ukraine.

“I am sorry that we are gathered here with fear, worry, and concern for those who are at home, especially for your own family members,” he said. “My heart breaks with your heart, but we are filled with that same sense of hope, and that hope comes to us because of Jesus Christ, who faced evil right in the eyes and rose over sin and death. May God bless you tonight, may God bless all your families in the days to come.”