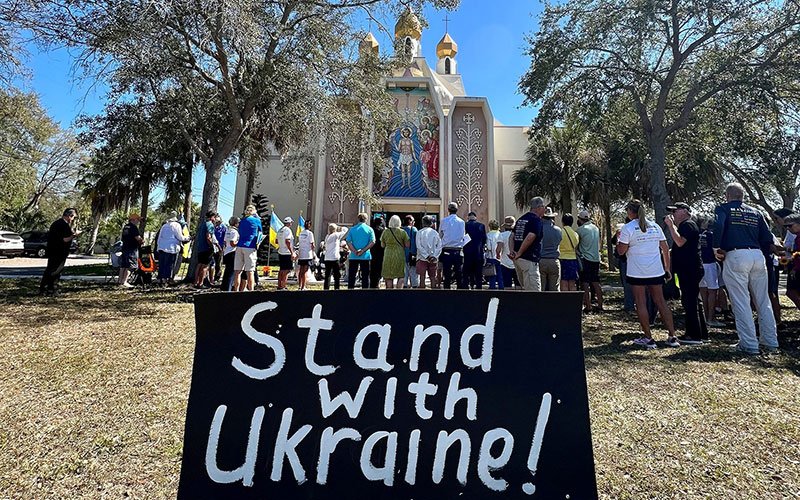 People at Epiphany of Our Lord Ukrainian Catholic Church in St. Petersburg, Fla., gather March 2, 2022, for an outdoor prayer vigil seeking God's assistance for an end to the conflict in Ukraine. (CNS photo by Katie Camario/ Gulf Coast Catholic)

WASHINGTON (CNS) — Amid the developing humanitarian crisis in Ukraine, the chairman of the U.S. bishops’ international policy committee urged the U.S. government “to provide all possible assistance to the people of Ukraine and to work closely with faith-based partners who are already on the ground providing emergency aid.”

In it he also encouraged everyone “to give generously to organizations such as Catholic Relief Services and USCCB’s Collection for the Church in Central and Eastern Europe that are bringing tangible relief and the hope of Christ to those in need.”

Donations to CRS, the U.S. bishops’ overseas relief and development agency, can be made at https://bit.ly/3KhEvFv. Information on how to give to the USCCB collection can be found at https://www.usccb.org/committees/church-central-eastern-europe.

“On Feb. 24, the world watched in horror as Russia launched airstrikes and began shelling Ukraine,” Bishop Malloy said. “The death toll is already in the hundreds if not thousands and mounting. Over 1 million Ukrainians have already fled the fighting into neighboring European countries and millions more could become refugees.”

In this time of crisis, he said the U.S. bishops “echo the appeal by Pope Francis to those ‘with political responsibility to examine their consciences seriously before God, who is the God of peace and not of war … who wants us to be brothers and not enemies.'”

“We join with the Holy Father in praying that ‘all the parties involved refrain from any action that would cause even more suffering to the people, destabilizing coexistence between nations and bringing international law into disrepute,'” Bishop Malloy said.

“We also join in solidarity with the Ukrainian Orthodox Churches and the Ukrainian Catholic Church in the U.S. who are all united in prayer for their people and their homeland,” he added.

The Knights of Columbus fraternal organization, based in Hartford, Connecticut, is among U.S. groups that have launched humanitarian initiatives for Ukraine and its people.

On Feb. 25, the Knights committed $1 million for immediate distribution to support Ukrainians impacted by the Russian invasion and also launched the Ukraine Solidarity Fund, pledging to match all funds raised up to an additional $500,000.

As of March 2, the fund had raised over $747,000, for a total of more than $2.2 million in assistance; 100% of donations are being used to assist internally displaced people and refugees from Ukraine, according to a Knights news release.

It said the funds are being used to provide shelter, food, medical supplies, clothing and religious goods, as well as other humanitarian needs as identified, both directly in Ukraine and through refugee sites in Poland.

“Some of the proudest moments in the order’s history have come amid the adversity of war,” Supreme Knight Patrick Kelly said in a video message to the more than 1,800 Knights of Columbus in Ukraine Feb. 25. “We are called ‘Knights’ for a reason. There is a reason we count patriotism among our guiding principles. The hour is upon us.”

In Poland, among other efforts, local Knights have established tents at the Polish-Ukrainian border to distribute food and water to refugees; have established collection sites in some cities for medical supplies, warm clothing and necessities; and have created a database of parishioner homes and parish centers that will host refugees.

“Polish Knights and their families have already received and housed wives and children sent by some Ukrainian Knights across the border,” the news release noted.

Editor’s Note: A list of other organizations accepting donations to help the Ukrainian people can be found at https://www.catholicnews.com/update-where-to-give-to-help-ukraine.