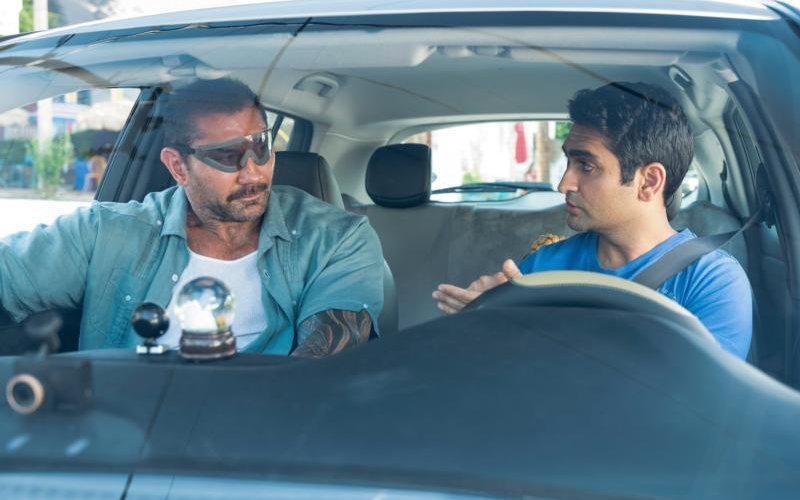 Dave Bautista and Kumail Nanjiani star in a scene from the movie "Stuber." (CNS photo by Fox)

NEW YORK (CNS) — With a shared-economy premise that’s no doubt meant to be timely and an odd-couple pairing as hoary as David Letterman’s beard, “Stuber” (Fox) takes viewers for a spin. But the result is no joy ride.

In fact, only a few detours in the direction of strengthening family bonds and the prioritizing of emotional connections over casual hook-ups save this supposedly comic journey from going off the map entirely.

Unable to drive after outpatient eye surgery, aggressively macho police detective Vic Manning (Dave Bautista) is forced to call an Uber when he suddenly gets a lead on the whereabouts of Tedjo (Iko Uwais), the psycho drug dealer he’s been obsessively pursuing ever since the pusher killed his partner. Stu (Kumail Nanjiani), the timid driver who responds, finds himself essentially hijacked by his belligerent passenger.

Unwillingly drawn into the chase — and into some perilous crimefighting — Stu discovers he has more physical courage than he imagined. Impatient, inconsiderate Vic, meanwhile, learns some life lessons from his sensitive temporary chauffeur. The most prominent of these involves Vic’s previously neglectful relationship with his grown daughter, successful artist Nicole (Natalie Morales).

Stu is all the more anxious to be rid of Vic because he has an appointment with Becca (Betty Gilpin), a pal he would like to make his girlfriend. The two once shared a roll in the hay and, with Becca feeling vulnerable after discovering her callous boyfriend has been cheating on her, Stu is hoping history will repeat itself.

Perhaps under the influence of the myriad dangers through which he’s passing, however, Stu comes to the insight that his deep feelings for Becca are incompatible with such offhand encounters. That’s both an unusual realization for a male character in a Hollywood movie to reach and a refreshing one.

All too soon, though, it’s back to the usual drill of lowest-common-denominator humor. Thus, because — as we all know — men’s private parts are hilarious, Vic and Stu’s itinerary necessarily includes a stop in the changing room of a male strip club. There one of the denizens, clad in the altogether, nonchalantly passes into the frame of Stu’s cellphone as he’s FaceTime chatting with Becca.

On it goes in that vulgar vein, with the occasional one-liners that work far outnumbered, in Tripper Clancy’s script, by lazy, distasteful jokes. As a result, moviegoers of sense will likely emerge from director Michael Dowse’s often irritating buddy picture feeling Styft.

The film contains considerable harsh violence with gore, torture, much sexual humor, including a sight gag involving a glimpse of full male nudity, about a half-dozen uses of profanity, a couple of milder oaths and pervasive rough and crude language. The Catholic News Service classification is L — limited adult audience, films whose problematic content many adults would find troubling. The Motion Picture Association of America rating is R — restricted. Under 17 requires accompanying parent or adult guardian.
– – –
Mulderig is on the staff of Catholic News Service.
– – –