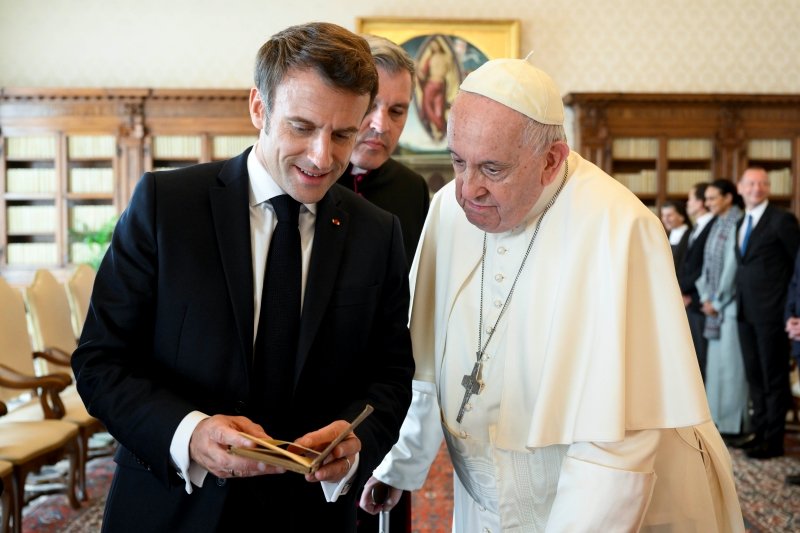 French President Emmanuel Macron shows Pope Francis a 1796 French edition of Immanuel Kant's book, "Perpetual Peace: A Philosophical Sketch,' during a meeting Oct. 24, 2022, in the library of the Apostolic Palace at the Vatican. Macron was in Rome to speak at the opening session of the interreligious meeting for peace sponsored by the Community of Sant'Egidio. (CNS photo/Vatican Media)

ROME (CNS) — The international community must work for peace, and believers of all faiths must pray for it, but pressuring Ukraine to make peace with Russia would be to “consecrate the law of the strongest,” French President Emmanuel Macron told religious leaders meeting in Rome.

“We all know how the Orthodox religion today is being manipulated by the Russian authorities to justify its acts,” Macron said Oct. 23 at the opening in Rome of the annual religions and cultures for peace conference sponsored by the Community of Sant’Egidio.

Condemnation of Russia’s invasion of Ukraine dominated the opening talks even as Metropolitan Anthony of Volokolamsk, head of external relations for the Russian Orthodox Church, sat in the front row of the auditorium at Rome’s Nuvola Conference Center. He declined to speak to reporters.

A few hours before the conference began, Pope Francis told visitors in St. Peter’s Square that he would join the religious leaders Oct. 25 at “the Colosseum to pray for peace in Ukraine and in the world,” and he asked everyone to join him in praying for Ukraine. He also met privately with Macron for almost an hour Oct. 24 at the Vatican.

“Talking about peace and calling for peace today can be unbearable for those who are fighting for their freedom, and it can give them the feeling of being somehow betrayed,” Macron said at the Sant’Egidio conference the evening before meeting Pope Francis.

Peace is the supreme good and always requires concessions, Macron said, but if the terms are dictated from outside, they enshrine injustice and sow the seeds for future unrest.

The French president said the point that a treaty which “bears the roots of a new war” cannot be called a peace treaty is a key point in Immanuel Kant’s book, “Perpetual Peace: A Philosophical Sketch,” and that he would give Pope Francis a 1796 French edition of the book.

“We wake up in the morning and we check what was blown up during the night,” she said. “At supper, we discuss how to prepare for a nuclear explosion.”

“Our houses are destroyed, our cities are in ruins,” she told the conference, “but our love, our solidarity, our ability to help others, our dreams cannot be destroyed.”

Italian President Sergio Mattarella told conference participants that faced “with the proliferation of conflicts in so many parts of the world, with a war once again bloodying Europe, one would be led to think that humanity is incapable of learning from its mistakes, that the collective memory that should guide and should prevent the same tragic errors from being committed has been lost.”

But, he said, St. John Paul II’s decision in 1986 to bring leaders of all religions to Assisi to get to know each other, to make a commitment to teach their followers nonviolence and to pray for peace was a sign of how close religious communities are to the lives and struggles of their people as well as a recognition of the right of every person to live in peace.

“There is no such thing as a ‘holy war,'” Mattarella said to applause. “Instead, there must be a ‘holy peace,’ to authentically serve humanity and its future.”

Cardinal Matteo Zuppi, president of the Italian bishops’ conference and a member of the Sant’Egidio Community, told the conference that “without dialogue only weapons remain.”

However, “dialogue by no means treats all motives as equal, it does not avoid the question of responsibility, and it never confuses the aggressor and the victim,” he said. Stopping the exponential spiral of war is possible only by recognizing the truth.