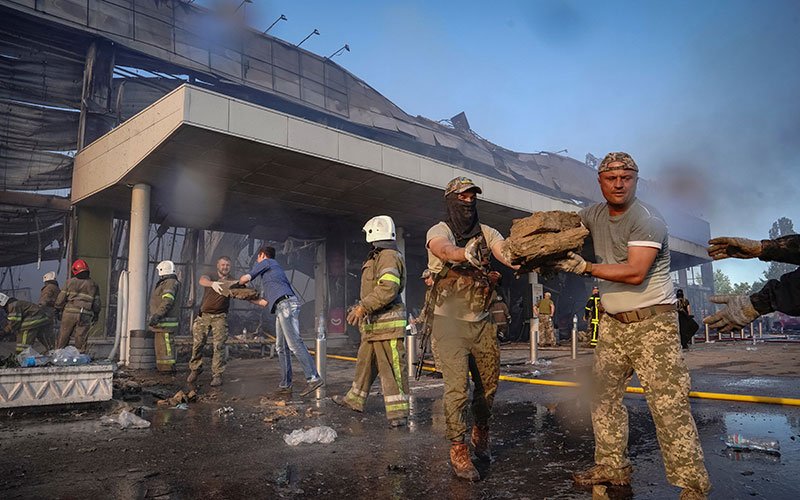 Rescuers and service members work at a site of a shopping mall was hit by Russian missile strikes in Kremenchuk, Ukraine, June 27, 2022. (CNS photo by Anna Voitenko/Reuters)

LVIV, Ukraine (CNS) — Russian missile strikes on a Ukrainian mall with about 1,000 civilians inside were the “largest terrorist attack in Europe in decades,” said Archbishop Sviatoslav Shevchuk, major archbishop of the Ukrainian Catholic Church.

“As of this morning, we have news that at least 18 people have been killed, about 40 people are missing and about 60 are injured,” Archbishop Shevchuk said June 28. “This is the largest terrorist attack in Europe in decades. Today we sympathize, express our prayerful closeness to the relatives and friends of the victims, all the wounded as a result of this terrorist act.”

Ukrainian President Volodymyr Zelenskyy called it “one of the most daring terrorist attacks in European history.”

The Associated Press reported Zelenskyy said the mall presented “no threat to the Russian army” and had “no strategic value.” AP said he accused Russia of sabotaging “people’s attempts to live a normal life, which make the occupiers so angry.”

In his remarks, reported by the Religious Information Service of Ukraine, Archbishop Shevchuk spoke of several other incidents.

“The Luhansk region is a steppe zone, where it is quite dry, and now it is quite hot in Ukraine, and there in Lysychansk people stood in line for water,” the archbishop said. The people waiting for water “were shot by the Russians. In the same way yesterday, rocket attacks on Kharkiv were inflicted, people were also killed, many were wounded. And this morning the city of Mykolaiv was fired upon.”

The archbishop praised Ukrainians, especially young people defending their homeland against the Russian invasion, which began Feb. 24. Archbishop Shevchuk said many service members had been teachers, scientists, doctors or artists before the war.

“Heavy fighting is taking place along the entire front line. But Ukraine is standing. Ukraine is fighting. And we thank the Lord God and the armed forces of Ukraine that we have survived to this morning and can see the light of day.”