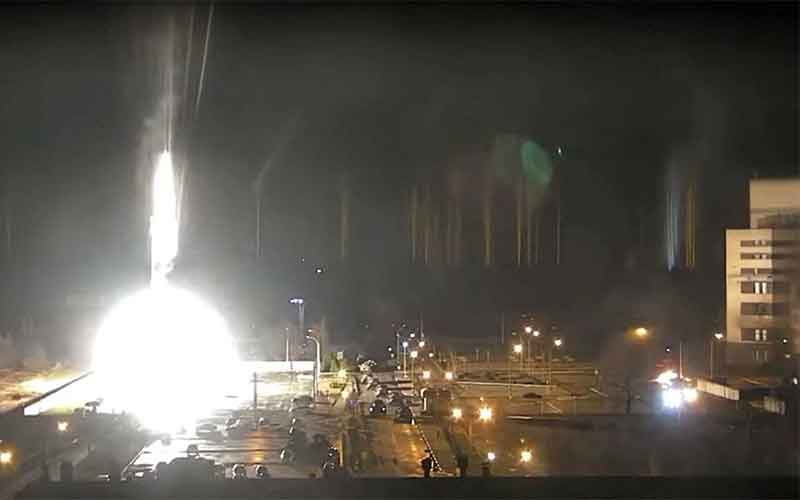 Surveillance camera footage shows a flare landing at the Zaporizhzhia nuclear power plant during shelling in Enerhodar, Ukraine, March 4, 2022, in this screengrab from a video obtained from social media. (CNS photo by Zaporizhzhia NPP via YouTube/via Reuters

ROME (CNS) — The attack on and seizure of Ukraine’s Zaporizhzhia nuclear power plant by Russian forces could lead to an ecological disaster 10 times worse than the Chernobyl nuclear disaster, said the head of the Ukrainian Catholic Church.

In a video message released March 4, Archbishop Sviatoslav Shevchuk of Kyiv-Halych said the attack should be a cause of concern for the world, especially for those “who care for the environment, those who care for the ecological awareness of humanity.”

“This is not only becoming a humanitarian catastrophe before our very eyes. It is an irreversible attack on God’s creation that for decades, for centuries, will be impossible to correct,” he said. “Ukraine already experienced Chernobyl. Now it stands on the threshold of a new atomic threat that can be 10 times worse.”

According to the Reuters news agency, a fire that broke out at a training center in the facility, which is the largest nuclear power plant in Europe, was extinguished after Russian troops captured the site.

Although the fire took place in an area outside the main plant and there were no signs of elevated radiation levels, the attack prompted a response from the International Atomic Energy Agency.

“I’m extremely concerned about the situation at the Zaporizhzhia nuclear power plant and what happened there during the night,” said Rafael Grossi, head of the IAEA, in a March 4 statement.

“Firing shells in the area of a nuclear power plant violates the fundamental principle that the physical integrity of nuclear facilities must be maintained and kept safe at all times,” he said.

The attack also drew condemnation from Burmese Cardinal Charles Bo of Yangon, president of the Federation of Asian Bishops’ Conferences.

“The nightmare scenario of a global nuclear holocaust is frighteningly becoming a possibility,” Cardinal Bo said in a statement published March 4. “The massive attacks on Ukraine and the impending threat of use of weapons of mass destruction have brought the world to the threshold of self-annihilation. The heart-wrenching scenes of Ukraine attacks have shocked the world. This has to stop.”

In his video message, Archbishop Shevchuk had said the continued bombing by Russia has cost countless innocent lives and has caused “rivers of blood and a sea of tears” to flow in Ukraine.

He also addressed the many refugees who have fled the country in the wake of the Russian invasion, which began in late February. As of March 3, more than 1.2 million Ukrainian refugees have escaped to neighboring countries, the U.N. Refugee Agency reported.

He also prayed that St. Michael, the patron saint of Kyiv, Ukraine’s capital city, to “fight for Ukraine! Cast down that devil who is attacking us and killing us, bringing devastation and death.”

“We perceive today that the Archangel Michael, together with the whole heavenly host, is fighting for Ukraine,” Archbishop Shevchuk said.