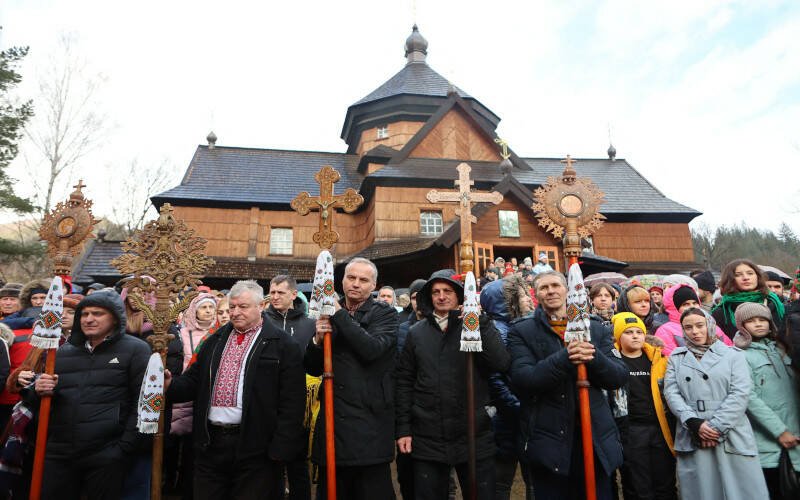 People take part in Christmas celebrations in the Orthodox Church of Ukraine’s Church of the Nativity of the Most Holy Theotokos in Kryvorivnya, Ukraine, Dec. 25. (CNS photo by Yuriy Rylchuk/Reuters)

KYIV, Ukraine (CNS) — Intermittent electricity and air raid sirens cannot and should not stop Ukrainians from celebrating the birth of Jesus, said Archbishop Sviatoslav Shevchuk of Kyiv-Halych, head of the Ukrainian Catholic Church.

“Now, in this time of war, we should celebrate Christmas more than ever — solemnly and openly, caroling with joy both at home and in parish churches, and on the streets of our towns and villages,” the archbishop said in a Christmas message published Dec. 24.

While most Christians in Ukraine — both Orthodox and Eastern-rite Catholics — usually celebrate Christmas and other feasts according to the Julian calendar, this year the Orthodox Church of Ukraine gave its parishes the option of celebrating Dec. 25 instead of Jan. 7. And many other Christians followed suit, celebrating on the same day that Ukrainian refugees were marking Christmas in the West and pointedly deciding not to celebrate the birth of the Prince of Peace on the same day that Russian Orthodox do.

Instead, he wrote, “This year, when in the Ukrainian sky the enemy is trying to cancel out the radiance of the Christmas star with its missiles and bombs, we should pay attention not to the calendar, not to astronomical phenomena, but to the fact that Christ came today to be born in the body of a tortured, crucified and wounded Ukraine.”

In his Christmas message, he offered special greetings to “our soldiers at the front,” to civilians and soldiers who have been wounded and to all those mourning the loss of loved ones.

“I extend my words of love and support to all in captivity or in temporarily occupied territories, who endure torture and abuse by the occupier and are unable to prepare for themselves a festive dinner or pray in their native church on Christmas Day,” he said.

“From the bottom of my heart, I wish all of you the authentic joy of the children of God, a tasty kutia, a cheerful celebration of Christ’s Nativity, and a happy, peaceful and blessed New Year,” he concluded. Kutia is a sweet wheat berry pudding, traditionally eaten on Christmas.

As he has done throughout the war, Archbishop Shevchuk also posted a video message Dec. 25, the 305th day of Russia’s war on his homeland.

“Today, many Christians in the world, many sons and daughters of our church who live according to the Gregorian calendar, celebrate Christmas, the Nativity of Christ,” he noted. “Ukraine is so looking forward to this Christmas!”

Many people in Ukraine, he said, were asking “whether it is even possible to celebrate during the war. Is it possible to rejoice during such dramatic circumstances? But today we want to tell ourselves and the whole world: Christmas is a holy day that was not prepared by man, but by God. Despite our weakness, our grief and our pain, Christ comes to be born among us. Heavenly joy is coming to Ukraine.”

And while Russian aggression is the primary worry, Archbishop Shevchuk asked Ukrainians not to let commercialism steal their celebration of Christmas either.

In his video message he prayed, “O God, newborn savior, prince of peace, bless our long-suffering Ukrainian land with your just, heavenly peace!”