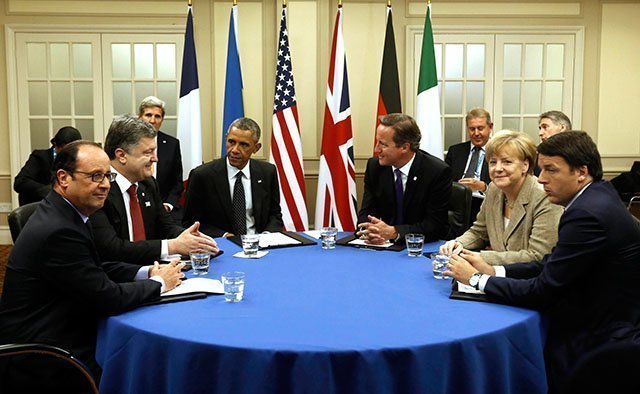 LVIV, Ukraine (CNS) — Ukraine’s Catholic bishops have warned their country is now "flowing in blood," and urged Western governments not to become "accomplices in the sin of murder" by failing to support it.

"This peaceful sovereign nation has been subjected to a direct military intervention by a northern neighbor — hundreds of units of heavy weaponry and technology, thousands of armed mercenaries and soldiers of Russia’s standing army are crossing the borders of Ukraine, sowing death and destruction, in disregard for the terms of the cease-fire and recent diplomatic efforts," the bishops said.

"If these crimes are not stopped immediately, with the onset of the winter cold the death toll will increase tenfold. Those who kill people in Ukraine today will not hesitate tomorrow to turn their weaponry against anyone in their own country and beyond its borders, or to attack any other nation in the world."

The statement was published Sept. 10 during a weeklong meeting of the Ukrainian Catholic Church’s governing synod.

It said the "real state of affairs" in Ukraine was being distorted by propaganda, which had reached an "unprecedented level of hatred" and proved "no less damaging than weapons of mass destruction."

"In the face of such grave crimes, we call out to the consciences of believers of all religions and faiths, and we appeal to all people of good will, to heads of state and members of the international community: Stop the bloodshed in Ukraine," the bishops said.

"Silence or inaction and reluctance to recognize the gravity of the situation in our country can turn everyone not only into a mute or indifferent witness, but also into an accomplice to the sin of murder, which cries to heaven for justice."

Ukrainian President Petro Poroshenko said Sept. 10 that he believed most of Russia’s estimated 3,000 combat troops had been withdrawn under a Sep. 5 cease-fire, after entering Ukraine with tanks and heavy artillery to support separatist forces around the eastern cities of Donetsk and Luhansk.

However, European Union officials said they would press ahead Sept. 12 with new economic sanctions, including denial of access to European financial markets for Russian oil and gas companies.

The Ukrainian bishops said many people had been kidnapped, tortured and publicly humiliated, while hundreds of thousands of refugees were being "forced to flee their homes due to threats against their lives."

"The entire world has been able to witness how, over the last months, the aggressor commits crimes against humanity on the territory of Ukraine," said the bishops.

"We especially call for responsible action from those whom the Lord has given authority, to take the necessary decisions … to restore peace and security in Europe. And once again we call all believers and people of good will to urgent prayers for the end of aggression and the restoration of a lasting and comprehensive peace."