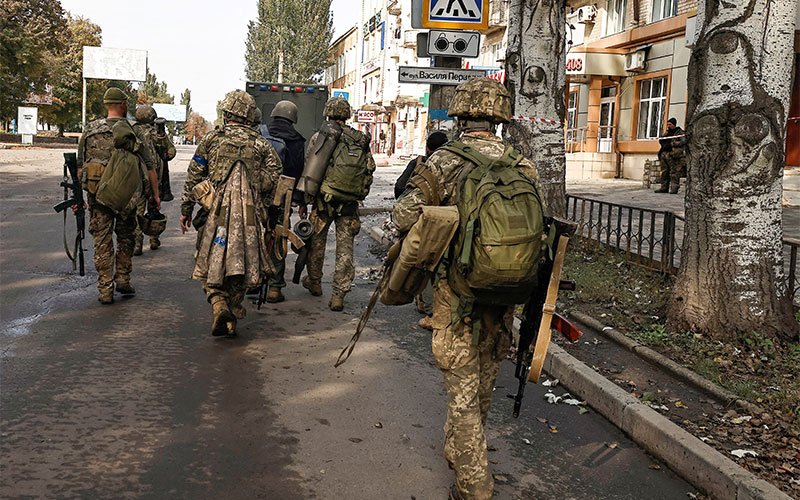 The annexation came after “after a farcical series of pseudo-referendums” conducted “before the eyes of the world,” they said.

“Putin’s referendum is a sham just like all his treaty agreements,” said Sister Ann Laszok, a Sister of St. Basil the Great in Jenkintown, Pennsylvania. “People were forced under gunfire to vote for acceptance. We knew the outcome before the vote.”

On Sept. 30, Russian President Vladimir Putin held a ceremony in Moscow at which he and Russian-installed proxies signed documents for the seizure of Ukraine’s Donetsk, Luhansk, Kherson and Zaporizhzhia regions.

The areas, each of which are approximately the size of Massachusetts, combine to form “15% of Ukrainian territory that, before 2014, was home to 8.5 million Ukrainians,” noted the U.S. Ukrainian Catholic bishops in their statement.

Russians fearing for their lives if they express opposition to annexation’

Russia’s so-called “annexation” of the regions came after several days of sham referendums in those provinces, during which residents were polled door-to-door by Russian supporters accompanied by Russian soldiers.

A number of residents reported fearing for their lives if they expressed any intention to oppose the so-called vote.

At present, Russia does not hold full military control of the regions, according to data from on-the-ground observers and analysts such as those at the Institute for the Study of War.

Russia held a similar pseudo-annexation event regarding Ukraine’s Crimea province in 2014, marking the start of a long-running war on Ukraine — declared a genocide by several investigators — that accelerated with the Russian Federation’s full-scale invasion of Ukraine on Feb. 24 of this year.

Amid preparations for the Moscow ceremony, Russian forces shelled a civilian convoy in Zaporizhzhia the night before, killing at least 25 and injuring dozens who were attempting to rescue relatives and deliver humanitarian aid.

The sham referenda and the annexation attempts — the latter of which directly violate international law as an act of aggression — have evoked severe condemnation from global leaders.

Numerous nations, including U.S. and United Kingdom, not recognizing the ‘annexation’

Numerous other nations, including the United Kingdom, have issued similar statements.

Ukraine itself responded to the move by signing an application for accelerated accession to NATO Sept. 30, with President Volodymyr Zelenskyy vowing his nation “will not allow” Russia to “steal something that does not belong to it … rewrite history and redraw borders with murders, torture, blackmail and lies.”

International reaction underscores that “Putin’s bogus referendum is primarily designed to feed disinformation and lies to the Russian people,” said Eugene Luciw, president of the Ukrainian Congress Committee of America’s Philadelphia chapter and a member of Presentation of Our Lord Ukrainian Catholic Church in Lansdale.

Luciw said Putin is seeking “to convince (Russians) and perhaps the now extremely rare Russian sympathizers in the world that his brutal, unlawful, genocidal attack of Ukraine and her civilian population is righteous and justified.”

In fact, said Luciw, today’s ceremony “is nothing short of an act of terrorism packaged inside of an obvious sham. The entire civilized world knows this and has condemned Russia’s criminal action.”

“There are no secrets anymore,” said Jonathan Peri, president of Jenkintown-based Manor College, which has deep roots in the area’s Ukrainian American community.

“Even with all that dictators can do to hide the truth with their government-controlled media outlets, the people know what’s going on,” he told CatholicPhilly.com, the Philadelphia Archdiocese’s online news outlet. “Putin’s open and obvious illegitimacy undermines all attempts at credibility.”

Analysts speculated that Putin might use “annexation” to escalate war

A number of analysts have speculated that Putin might use the declarations of “annexation” to escalate the war, possibly using nuclear weapons to reinforce his illicit claims on the Ukrainian regions.

The U.S. Ukrainian Catholic bishops warned that Ukrainians of various faith communities were at imminent risk.

“Russian imperialistic colonialism, accompanied by gruesome war crimes, the killing of tens of thousands of innocent civilians, and the massive destruction of villages, towns, and cities, enslaves not only the general population but also its churches and religious communities,” they said.

“The future of the Ukrainian Orthodox parishes, Eastern and Roman Catholic Churches, Protestant, Jewish and Muslim, and other communities of faith that stand up, as they have in unison, for truth and justice will be under a death sentence if these occupied territories of the Ukrainian state are not liberated,” the prelates added.

Russian authorities crack down on domestic protests to war

While Russian authorities have brutally cracked down on domestic protests to the war — detaining over 2,400 individuals so far — there has been a “mass exodus of Russian society due to the recent pronouncement of the ‘partial mobilization’ of its members” for military service, said Nicholas Rudnytzky, professor of history and dean of academic services at Manor College.

“(They are) fleeing and abandoning their homeland to the vicissitudes of a lunatic dictator that they have enabled for the past two decades,” he said.

Adjacent nations, such as Finland, Kazakhstan and Georgia, “need to be wary,” since Moscow has historically justified its invasions as “(defending) the ‘Russian speakers’ of that neighbor’s population,” as is the case with Ukraine, Rudnytzky added.