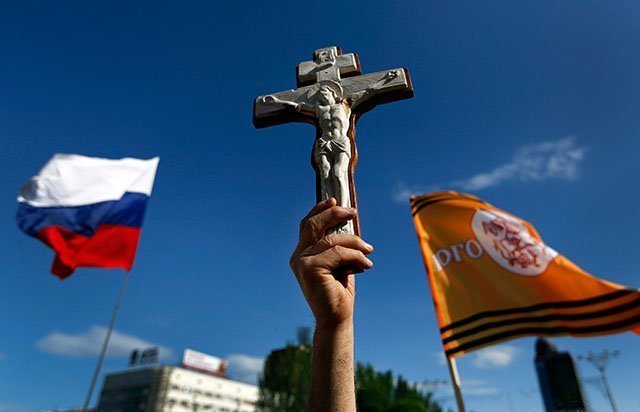 A pro-Russian man holds a crucifix next to a Russian flag during a demonstration in Donetsk's Lenin Square May 24 against the Ukrainian elections. Pro-Russian insurgents prevented at least half of the election districts in the embattled east of the country to prepare for the May 25 presidential election, a Ukrainian official says.

WARSAW, Poland (CNS) — A Catholic bishop in eastern Ukraine said church members are afraid to attend Mass in Donetsk and other towns after a priest from Poland was abducted by pro-Russia separatists.

"Local Catholics are living in conditions of great danger — the terrorists are doing what they like and shooting at people indiscriminately," said Bishop Marian Buczek, outgoing bishop of Kharkiv-Zaporizhia, whose diocese includes Donetsk, Luhansk and other conflict-torn cities.

"People can do nothing but stay at home and await better times, like everyone else. In places where there’s shooting, the Catholic and Orthodox churches have simply stopped functioning."

Bishop Buczek talked to Catholic News Service May 28, a day after Father Pawel Witek, a priest from the Society of Christ for Poles Abroad, by rebel fighters in central Donetsk.

A statement from the Society of Christ for Poles Abroad said Father Witek had ministered in Kazakhstan since 2003 and had traveled to Ukraine to renew his Kazakh visa. It said he had been visiting order members at a Donetsk parish, and members of the society were working with Polish diplomats to secure his release.

Poland’s Catholic information agency, KAI, reported May 28 Father Witek had disappeared on his way to an ecumenical peace service in Donetsk’s Constitution Square and was believed held in the city’s rebel-occupied Ukrainian Security Service headquarters.

Bishop Buczek told CNS there was "no reason why clergy should now become targets," since "most Catholic priests in this region are Ukrainian citizens simply doing their jobs."

"Many parishes are functioning normally — with the exceptions of Kramatorsk, where our chapel was machine-gunned by separatists last week, and Sloviansk, where the whole town is blocked," he added.

Confirmation of the abduction came as Ukrainian army units claimed to have restored control of Donetsk’s airport after a two-day battle with separatists.

Donetsk Mayor Alexander Lukyanchenko said at least 40 people had been killed May 27, although rebel leaders said the final toll could rise above 100.

Bishop Buczek told CNS the church had continued its charitable work of helping those made homeless or injured in the fighting with food, medicines and other aid. He added that the parish in Donetsk held Masses for local Catholics in Ukrainian and Russian, as well as in English, French and Vietnamese, and had never received complaints.

"We’re just a small minority here, so we can do little else," the bishop said.