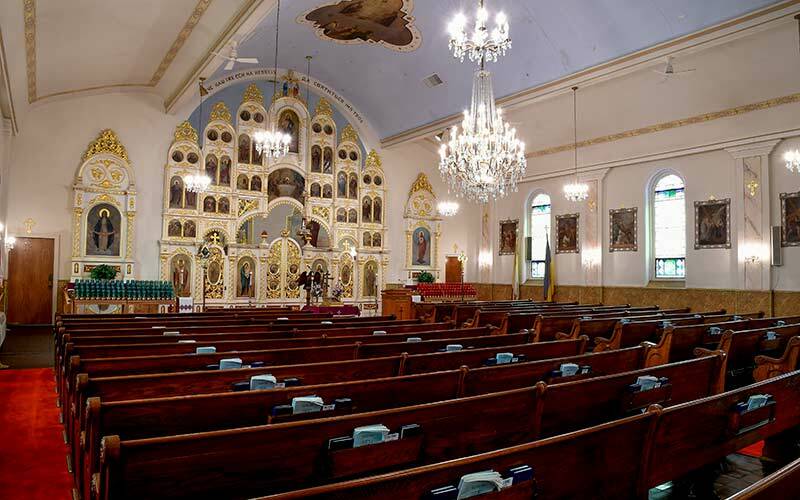 Ss. Peter and Paul Ukrainian Catholic Church in Auburn will host a prayer service every evening at 6 p.m. to pray for peace in Ukraine. (Courier file photo)

“Prayer is the only thing that can help us.”

In the wake of Russia’s Feb. 24 attack on Ukraine, Father Vasile Colopelnic implored Catholics to unite to pray for peace in Ukraine. Ss. Peter and Paul Ukrainian Catholic Church, where Father Colopelnic is pastor, will host a prayer service every evening at 6 p.m. for this purpose. The church is located at 136 Washington St. in Auburn. The service also will be livestreamed on the parish’s YouTube channel.

Most of the approximately 50 people who attended the first prayer service Feb. 24 are parishioners, but the public is encouraged to join parishioners in prayer.

“As a Ukrainian Catholic priest, I would like to make an appeal. … I would really like to ask everyone, all churches, our sister churches of the Latin rite, the Roman Catholic rite, to really pray for peace,” Father Colopelnic said.

Both Bishop Salvatore R. Matano of the Diocese of Rochester and Bishop Douglas J. Lucia of the nearby Diocese of Syracuse have reached out to the Ukrainian Catholic parishes within their geographic borders with assurances of their prayers and encouraged Roman Catholics to join in those prayers, Father Colopelnic added. Ss. Peter and Paul is part of the Ukrainian Catholic Eparchy of Stamford, Conn., which encompasses New York state.

“They are all united with the Ukrainian people. Everyone is united here,” he said. “Nobody expected to see this kind of invasion, this kind of brutality. It’s something unimaginable to even think about in the 21st century.”

This is a crucial moment in history, and Father Colopelnic said he prays the leaders of the world’s nations do not let the violence currently taking place in Ukraine go unchecked.

“If this violence will continue, I believe this will be a big problem for the whole democratic world. We’ll have to cope with the repercussions even in the democratic countries and the United States as well,” he said. “What’s really going on is this tension, this war between good and evil, and we see how fragile the world is.”

Both Roman Catholic and Ukrainian Catholic churches are charged with helping parishioners respect and protect the human dignity of all, and “what’s going on in Ukraine is exactly denying those rights for people of dignity, of freedom,” Father Colopelnic said.

Tags: Cayuga County News, War in Ukraine
Copyright © 2022 Catholic Courier, Inc. All rights reserved. Linking is encouraged, but republishing or redistributing, including by framing or similar means, without the publisher's prior written permission is prohibited.