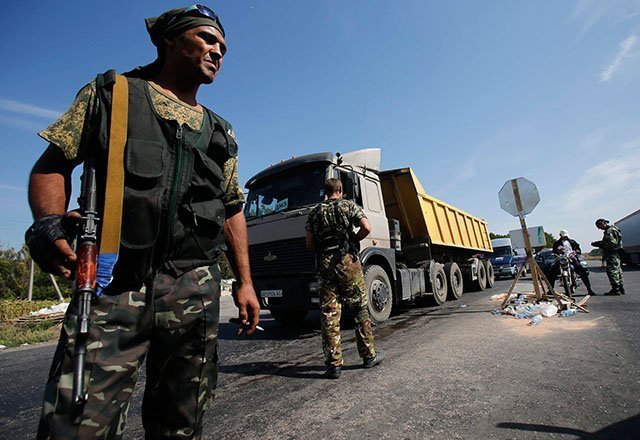 "Every right-thinking European should realize that what’s happening here has worldwide implications," said Bishop Bohdan Dzyurakh, secretary-general of the Ukrainian Catholic Synod of Bishops. "Besides raping all international law, (Russian President Vladimir) Putin is also showing the kind of security the world can expect from a nuclear-armed Russia. He will go as far as he’s allowed to go."

In a Sept. 4 interview with Catholic News Service, Bishop Dzyurakh said Putin and Russia had "violated all norms of international security." He said that, under a 1994 memorandum, Russian, U.S. and British leaders had promised to respect and refrain from using force against the "independence, sovereignty and existing borders" of Ukraine.

He said it was time the international community stopped "imagining it can talk to this aggressor and lead him to peace, and began using all available means to bar him."

"Innocent civilians are dying here every day, and we still hope Western governments will take their obligations seriously, and go beyond merely expressing concern and displeasure," he said.

The same day the bishop spoke, NATO leaders met in Wales and criticized Russia for further destabilizing Ukraine, where at least 2,600 people have died in fighting between government and rebel forces since April.

Bishop Dzyurakh said Catholic life was now "practically paralyzed" in rebel-controlled areas, where church members were preoccupied "only with surviving the terrible conditions."

He added that separatists in Donetsk had claimed to "have the addresses of all faithful and clergy" of the Ukrainian Catholic Church and said many Catholics had gone into hiding.

Church sources told CNS a Catholic convent belonging to the Immaculate Conception order had been seized by separatists in Donetsk, where Ukrainian Catholic Archbishop Stepan Meniok had also been thrown out of his residence.

They added that a local Catholic priest had been "imprisoned and tortured" by pro-Russian fighters, while another was being hunted because he backed the Kiev government.

Bishop Dzyurakh said he believed the separatist campaign in eastern Ukraine had been orchestrated from the start by Russia’s special services and now had to be backed with direct Russian intervention because of the success of Ukraine’s counter-insurgency. He added that Putin claimed to be defending the "Russian-speaking civilian population" of eastern Ukraine, but had in reality destroyed it by wrecking the region’s infrastructure.

"This merely shows he isn’t concerned for the welfare of these people — only for his own neo-imperialist ambitions," the bishop said.

"Unfortunately, the Western sanctions policy isn’t effective. As a Ukrainian citizen, I think other means must be used, not excluding military action, to stop this aggression, defend our nation and restore the international order Putin is destroying. By helping us in this way, the international community will be helping itself."

Earlier, a bishop from Ukraine’s smaller Latin-rite Catholic Church told Vatican Radio that some of his church’s members had been forced to flee rebel-held areas, making Catholic life impossible.

"These events violate the right of nations to choose their own path and are causing justified concern about our own homeland’s future," the Polish diocesan bishops said in an Aug. 31 statement marking 75 years since the outbreak of World War II. "We appeal for effective action to stop the tragedy of this war through peaceful means."