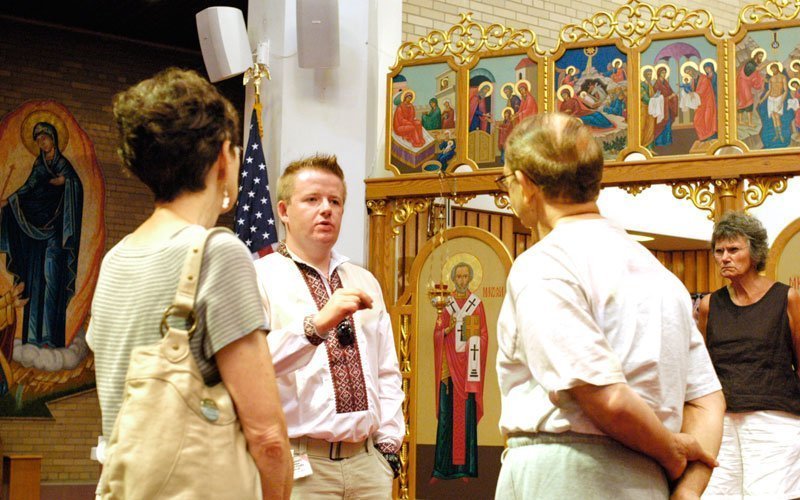 It is no coincidence that St. Josaphat Ukrainian Catholic Parish will celebrate for three days to mark its 100th anniversary.

The three-day jubilee is just one example of how the Eastern Catholic church uses patterns of three in prayer and liturgy to call to mind the Trinity, said Father Kiril Angelov, pastor of the church, which is located at 940 E. Ridge Road in Irondequoit.

The three-day celebration will include a reunion of all graduates of St. Josaphat Elementary School on Nov. 13, 2009; a jubilee banquet at the Hyatt Regency Rochester on Nov. 14, 2009; and a pontifical Divine Liturgy celebrated by a number of priests and bishops on Nov. 15, 2009.

To prepare for the anniversary, Father Angelov recently asked parishioners to pray for a spiritual renewal of faith, heritage and traditions. Other centennial events prior to the anniversary weekend will include Divine Liturgies, vespers, inspirational seminars and lectures, and youth gatherings.

Retreats also are planned for the centennial year. One on Palm Sunday weekend is planned for St. Josaphat parishioners and will be led by Bishop Nicholas Samra, a Melkite Greek Catholic bishop. St. Josaphat’s Holy Name Society is planning another for Aug. 28-30, 2009, at Notre Dame Retreat House in Canandaigua for Ukrainian parishes in the Rochester, Buffalo and Syracuse regions. A third retreat will take place in October 2009 with a Ukrainian bishop.

“The other thing we’re trying to accomplish is an outreach program to better explain our rite to others,” said Richard Pucher, chairman of the centennial committee as well as the parish’s festival committee.

“There’s no question about it, the church is a gem in Monroe County,” Father Angelov said. “For a spiritual point of view, and also architecturally, it is.”

To maintain that gem, the church also is planning Days of Caring, when parishioners will spend time volunteering at the church to help accomplish maintenance tasks. Fundraising also is taking place for renovations and improvements at the church. The parish’s annual festival Aug. 13-16, 2009, also will reflect the centennial celebration, Pucher said.

The parish also hopes to organize pilgrimages to the Holy Land and to Ukrainian holy shrines, Father Angelov said. An anniversary booklet also is under development with photographs of parishioners. That booklet is scheduled to be published at Easter of 2010 so photographs from the 100th-anniversary weekend can be included.

According to a centennial brochure, the first St. Josaphat Church was located on Remington Street in Rochester, but the parish moved to an existing church at 305 Hudson Ave. in Rochester in 1914.

John Boychuk, 95, who grew up on Glide Street in Rochester and attended the Hudson Avenue church, said his father treated him to a string of figs when he behaved himself during Divine Liturgies. He said sometimes he rode the trolley with friends after liturgies — the trip cost a dime.

Younger parishioners recalled St. Josaphat School, an all-day Catholic parochial school that was begun in 1945. At the school’s peak, the Sister Servants of Mary Immaculate educated first- and second-generation Ukrainian immigrants in kindergarten through eighth grade.

“Part of the class didn’t speak any English because our parents didn’t speak it at home,” said parishioner Gene Sydor. “I remember talking to my playmates, and they couldn’t understand me.”

In 1957, the parish bought land and two homes in Irondequoit, where many parishioners had begun moving. A mission chapel was established, and the parish moved permanently to Irondequoit in 1964. The school hall became the temporary church until the current church was completed in 1979.

Most parishioners accompanied the church on the trek to Irondequoit, said longtime parishioner Katherine Fedoryshyn of Brighton.

“You moved when the church moved,” said Fedoryshyn, who volunteered for 23 years as the parish secretary.

Another dramatic change in the church over the years is the languages in which Divine Liturgies are said. In the ninth century, Ss. Cyril and Methodius, known as the apostles to the Slavs, were given papal permission to translate Divine Liturgies into old Slovanic to better reach Slavic parishioners, Father Angelov said. In the 1960s, around the time of the Second Vatican Council, Masses began to be said in both Ukrainian and English, Pucher said.

“We are offering the services in English for nothing else but for the benefit of our parishioners and our brothers and sisters, the Roman Catholics, who are our visitors,” Father Angelov said.

Some traditions have stayed the same over the years, however. These include the blessing of Easter baskets and the blessing of pussy willows, which are grown at the church and used instead of palms on Palm Sunday, Sydor said. Another annual tradition is the parish arts and crafts festival, which attracts thousands each August.

Pucher noted that the parish and the many clubs and organizations that sprang from it provided a social connection for many Ukrainian immigrants who lived within walking distance of the church.

Some parishioners said the future of the parish is unclear, as many parishioners have moved away or have assimilated into nonethnic parishes.

“It’s more and more difficult to find volunteers to work at the church festival and do bingo,” Sydor said.

“There are not as many people in church,” Fedoryshyn said. “I think the younger generation just doesn’t want to be involved with a standard religion.”

That is the reason why parish leaders are encouraging all parishioners to embark on the spiritual renewal, Father Angelov said.

“There is nothing else but to grow more spiritual,” he said. “And we are trying to do this on a daily basis, and if so, what we are doing, then there is always hope that the church will grow and grow and spread the word of God.”

Despite the many changes in the parish’s past, a sense of community remains, Olga Boychuk said. She remembered the day her husband returned to take the collection after having regained movement following a stroke. A wave of emotion swept the church, she said.

“That day I was in my usual seat in the back, and every single person I could see was crying,” she recalled.